Skip to content
So week 6 comes to an end, and it was a good one.
On Thursday I did what ended up being a quite fast 11km run in the cold and wind.  I had to work late and couldn't really bring myself to do a longer run, especially not when it hurt to run against the icy wind. The last few km were at marathon pace or faster, so the end pace was 4:40.
On Friday I went to the gym and did some general strength work and a tediously slow 30min 5.5km treadmill run. Saturday was race day, look to the last post for details but it was a big PB in a 10km race. With warm-up and warm down I'll claim 12.5km for the day. Afterwards me and Jochen went swimming. I did a few different sets to keep it interesting, my fastest 100m being 1:39… nice! I swam, as usual, until I got cramp. 1.6km at the end.
Today I did my dreaded 125km cycle. Luckily it was not snowy, as had been predicted. I cycled to Oberdiebach, which is a 360m climb over 6km. I took it easy on the climb and the first few km were ok. Soon though there were a few slushy patches to be avoided, then the whole road was covered and the slushy bits were the best bits. A few hundred metres later I was spinning my back wheel out on the snow, and couldn't go on any further, so did a 180 and slowly descended the first part. That left me a few km short of the required 125, so by the time I got back home, I had 15km still to go, so I looped around a bit until the kms eventually ticked down and I could go home. It felt hard, mainly because I just haven't done any long rides, but the strong northerly wind wasn't too pleasant either.  Anyway it's in the bank now. 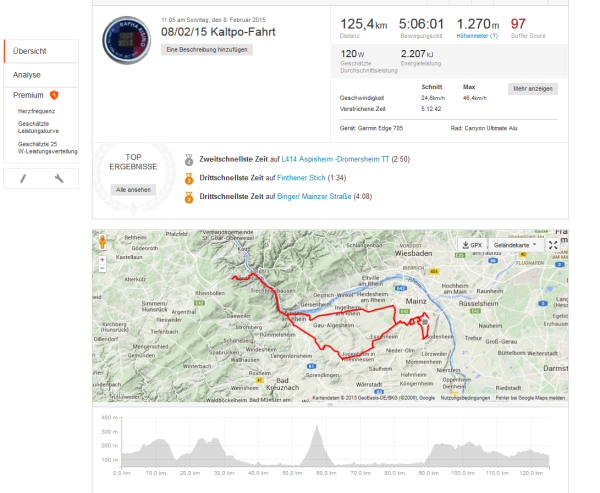