Skip to content
Ok week 26! Half the year is over, it's gone by fast!
I started off the week on Monday with run before work.  It was 10.7km (poop runde) at just under 5m/km pace.  Nice and easy and a good start to the week.
I went swimming straight after work, and this time the pool was warm enough and not full, which hasn't happened so often recently.  I took my fins with me and tried mixing together a full work out using the pull, paddles and fins, not all at once!  I ended up swimming 3200m, my longest swim ever.  I feel like my swimming is coming on nicely, and I am quite enjoying it too, who'd have thunk it?

Tuesday I decided to try my first cycling intervals for ages.  I just cycled to Wahlheimerhof and did 3 mins at 360w 3 times, then did an easy loop up to Sörgenloch, then another 3x3mins.  I should probably do either more intervals, or longer intervals, but it was a start.  I will try to fit in some intervals every week from now on.

Wednesday was the JP morgen corporate challenge in Frankfurt.  It is a big 5.6km race.  I left work just after 5pm and set off to cycle to Frankfurt.  GoogleMaps told me that it was about 40km, so I would have plenty of time, even on the route next to the Rhein.  Soon enough I got lost in Raunheim and ended up cycling round lost for quite a while.  Eventually I just went to the river and hugged it all the way to the sign in point.  Unfortunately it was already 7:20 when I arrived after 55km, so I signed in and jogged to the start.  I got there 3 minutes late, but found 30k people at the start line waiting.  After 30 mins I had hardly moved forward, then after 1h I decided it wasn't worth it, so left without running – DNS.  I tried to cycle as far as I could back to Mainz, but apparently took a wrong turn somewhere and ended up back in Frankfurt after 16km, so just got the train.  Not a hugely successful day, but 71km cycled and 2 T shirts and a pari of running shorts for the collection so I won't cry too much. 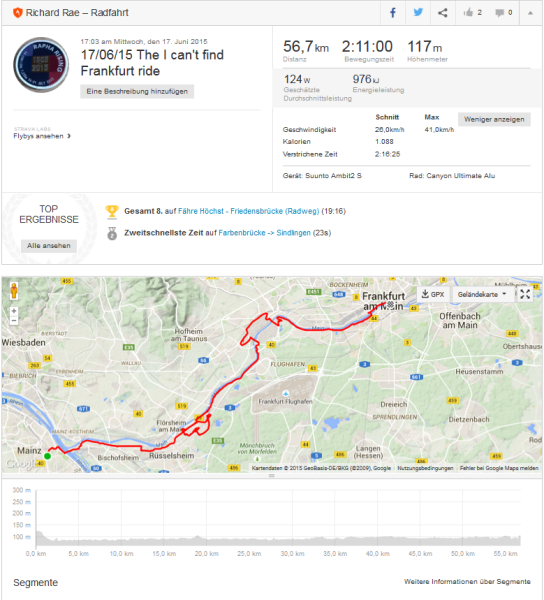 for a total of 3300m.  It felt quite interesting all the time, with each different 200m testing something a bit different.  I felt quite fast too, I think the seconds are starting to fall off.

Friday I ran after work.  I wanted to run a bit longer than normal, but I was pretty hungry and went too fast really.  I only did 13km, but at 4:42/km and 143bpm HR, it was pretty good overall.
On Saturday I was feeling very tired and lazy.  I knew I had the Wiesbaden Duathlon on Sunday, so didn't want to burn out my legs.  I had decided to go to Mombach for the TCEC swim, usually that is from 2-4pm, but in Summer apparently it is 10-12 instead, too early for me on that day.  So I had a nap, and watched rubbish online, before final dragging my ass out for a 91km ride.  It was actually pretty good, with some hard efforts and a 32.1km/h average speed.  I felt like I should have gone on for another hour, but I turned back for Mainz mainly as I had started out with the wind, and feared that after the turn I would be in a world of hurt (it wasn't as bad as I had feared.)

On Sunday I enjoyed my sleep in until 6:30am, when I had to get up to eat before the Duathlon.  I cycled to town to meet Jochen, then we went to the start.  Though the weather forecast was quite cold, but dry, it was wet.  About 30 mins from the start it really started raining hard, which on a hilly and technical course is a nightmare.  I will write a race report, but it didn't go well for me.

Again when I got home I was feeling tired, I wrote off swimming and cycling and had a nap.  That was until 7:30pm when I decided finally that I wanted to do something, so I cycled to Nieder-Olm and swam.  I only got into the water at about 8:10pm and it closed at 9pm, so I was time limited.  I did a fast 2k swim, with 2 times the sets I described on Thursday after my warm up, then did 300m to finish.  The entire 2000m took 39mins or so, then I rode home.  I was happy with my decision as I enjoyed the swim and added 21km to my cycling week.

I think I have to be careful with over-reaching at the moment.  I am feeling tired, maybe because of the races at the weekends.  I am going to do this week normal, then next week take an easier week to recover.  I have Wednesday off work this week, so I will try to get a long ride in then, that should reduce the stress next weekend of getting in my 300km for the week.  I have realised that my base mileage I want to do per week is actually 17+h of training, so on a 'bad week' like this one, where I only manage 14.5h of training, I think I can cut myself a bit of slack!