So after 4 weeks of my Jack Daniels plan I was in decent form going into the penultimate leg of the Wingertscup in Zornheim.  I had been in Ukraine the week before, so had jammed in 2 workouts on Wednesday and Thursday, before the race on Saturday, but though my legs weren't 100%, they were fine.  My Dad was in Germany visiting, so we went to Zornheim well in advance to get ready for the race.

I looked around at the start line and didn't see the guy that always win.  Max, my main competitor for 3rd/4th pace was there, but claimed not to be on form.  I fancied that I could be on for a good result if that was true, but just before the start, the fast guy rocked up.  The race started and there were 5 at the front, I knew 1 was running the 5km, I hoped the 2nd place was too, but he wasn't.  The guy who always wins was 3rd, but just ahead of me, Max and another guy from Mainz were just behind me.  The course had 1 steep uphill in the first few km, before going downhill for a long time.  I was losing time on the uphills, but at least holding my own on the downhills.

After I reached the lowest point on the course after 5km, I was in 3rd, but someone was quite close behind me, Mario from Mainz.  Max was way back and the guy that always wins was still only a few metres behind me.  The climb started and I started falling back.  Mario closed in and closed in, before finally overtaking me.  I thought we had reached the top as I was just behind him, and I fancied that as the last 3km or so are all flat or downhill, that I could re-overtake him, but the path turned right, revealing another few hundred metres of uphill ahead.  When we finally got to the true peak, he had a good 30m on me.  I tried to catch my breath and get rolling downhill, but I couldn't make any real inroads into his lead, then came another little uphill and I was done for, his lead grew to 50m or more, game over, no podium today.

I had a good look behind me, and Max was nowhere to be seen.  I reached the last 700m or so and didn't pay attention to which way people ahead of me had run.  I looked at the arrows on the ground and saw they pointed in both directions, I thought we had come from the left, so I ran right.  I ran along taking the next signed right turn, which soon opened out into a long downhill.  I saw that no one was ahead of me, so I had gone the wrong way!  I ran back uphill to where I had gone wrong, and Max was just ahead of me.  He saw that I had gone wrong and very kindly let me pass him for 4th place.  I am sure that I would have done the same for him, but he could have take 4th had he chosen to, I was done after sprinting to get back on course. 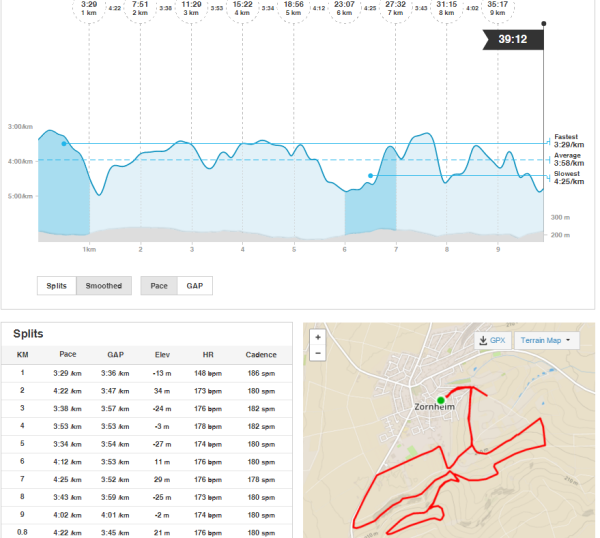 I felt like I ran a decent race, but I was definitely weak on the uphills.  I need to lose weight if I am going to have a real chance in Ebersheim, though I am starting to think that sub37 could well be doable on a true 10km race, even with some hills on route.  The winner in Zornheim ran 35:15 or so, 2:30 is a lot to pull in in 8 weeks, but next time I will be much further through my training plan, tapered and hopefully lighter, so I will give it what I can to go for a win.  My plan B is to beat the winning time from last year of 37:21, I can't control other people running dead fast, so maybe just setting a time goal would be better..

Anyway, I expect my next race will be a 15km Lindenseelauf.  That will be flat and hopefully the right distance, so I will be able to gauge my fitness properly.  Sub 57 will be good (PB fitness), sub 56 great, sub 55 amazing!

Into week 2 of the plan.  I started the week with a real long run this time, though long might be an exaggeration!  I did 17km to Gau Bischofsheim and back, so it was quite hilly. I ran at exactly 5:00/km pace and felt pretty decent, even with a bit of muscle ache still.

Although I was feeling ok, I stuck with my plan of having Monday free, so I didn't run and went to the pool instead.  Tuesday is workout day.  On the menu this time was 4 sets of (200m R 200m jg, 200m R 200m jg, 400m R, 400m jg).  I stupidly did all of the intervals too quickly, especially the first 400m interval in 75 seconds instead of the prescribed 81.  That made the last set a bit harder, but I could have done another set had it been required.  My calves started to seize up pretty quickly after the run, but no where near as badly as last week.

On Wednesday I ran straight after work, I trusted my stomach so much that I ran in the clockwise direction of my normal 11,5km loop, something I rarely do!  I did 9 sets of strides and had a 4:48/km pace with a 149 HR, not too bad.

On Thursday I ran in the evening as the sun was setting.  In wanted to do more than the 7,3km I did last Thursday, so ran to Klein Wintersheim and back.  It worked out to be 9,3km and a nice run, all slightly uphill on the way out, then an easy cruise home.  My new Skechers Go Run Ultras had arrived so I used them for the first time, just like my old ones, they didn't rub and fit nicely.  I really enjoyed this run it was 4:56/km with a HR of just 138 ave.  It was made all the better by a mention on the Rob Watson show podcast that I was listening too, I couldn't help but laugh.

Friday was workout day 2.  Last week i had made these intervals easier, this week I was going to do it as close as possible to what was described.  I ran to Willy Wacker straight after work and after a quick pitstop did my 3×1 mile T intervals.  They are supposed to be 6:20/mile, I was running 9 metres less, but ran them all a little too fast, but in control too.  6:11, 6:15 and 6:13 were the splits, followed by 6x200m R which were at almost perfect pace, 2 were 40.xs but the others all about 39s.  The whole run ended up being 12.3km at 4:23 pace and a 158bpm average HR.

Yesterday I ended the week with an easy run.  I ran to Bodenheim, which is a hilly route for me.  I completely forget about the strides until I was quite close to home, so only managed 6 sets, though I think the 10% inclines must count as a stride too, so I won't lose any sleep over that.  Again my pace was good at 4:52/km for 11.8km with an average HR of 146.  It was definitely a bit harder due to the inclines, but probably better specific training for Zornheim and Ebersheim as they have a hill or 2 en route too.

All in all I did 71.8km this week.  The next 2 weeks could be a bit tougher as I am going to Ukraine on Wednesday.  I will run everyday until then, have Thursday as a rest day, and see what I can manage when I am away.  The general plan is to get up to at least 80km per week, that would be a long run of 20km and 12km 5 days a week, that doesn't sound too stressful.  I feel great at the moment, I am running sub5/km pace all the time very comfortably.  I want to lose weight as I seem to have settled at 82.5kg, at least 4kg more than I want to to be. I'll see what happens in the next few weeks, if I don't start crawling towards 80kg, then I might have to make some dietary changes 🙁