I had set myself the goal of running a sub-18 minute 5km this year, but I only ran one 5km, and that was 4 days after my Ironman and over a 5,2km course, both making a sub-18 somewhat unlikely!

Given that I am in good shape and got through Christmas without illness or allergy induced bad lungs, I fancied giving it a go by myself as a time trial at the local track.  I mentioned in my last post that it isn’t an easy goal for me, it’s certainly much faster than a tempo run.  It was windy today, which didn’t help, but it was also cold and the track was completely empty, especially as the gates were locked so I had to jump then to get in 🙂 END_OF_DOCUMENT_TOKEN_TO_BE_REPLACED

So this was the one I was aiming for. I wanted to win a race for the first time ever, no age group win, just first over the line.  I have followed the Jack Daniels plan very closely and really feel like I am in 36:30 or so form for 10k.  Ebersheim is a bit hilly but there is a long downhill too, so it kind of levels itself out.  Last year I ran a 39:45 and was really happy with that, I fancied that I could beat the winning time from last year of 37:21, and then just hope that that is good enough to win it.

I got there well in advance and once Andre and Ronald were ready we went for a little warm up jog.  The wind was pretty strong and in the wrong direction, i.e. against uphill and with downhill, but it had dried up a bit since yesterday when it rained for most of the day. 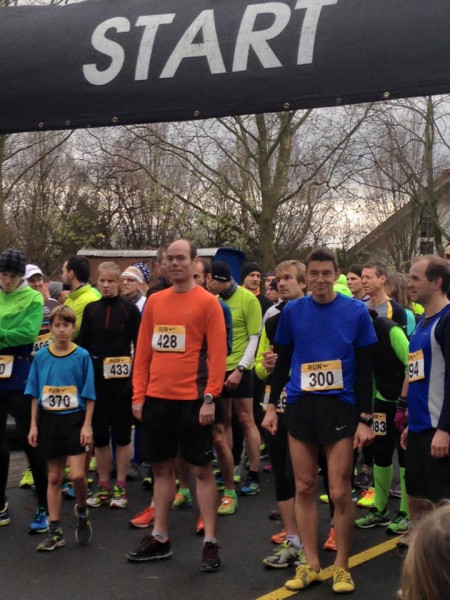 I got myself on the start line and was straight into the front group when the gun fired.  I wanted to run behind someone into the wind and soon enough 1 person went forward to take up the pace.  I was in a 3 person group just behind.  After the first 1km the 2 others in my group started to fall back, but the leader was slowing stretching his lead too.  After 3km the route goes by the start area and an ecstatic looking Katja was there cheering me on!  KMs 4-5 are slightly uphill and on paths that were pretty muddy.  I had to run up on the field twice to avoid the massive long puddles on the route.  There were also a couple of dodgy corners that were slippy that I cautiously jogged round.

Then comes the downhill.  I tried to push the pace a little, hoping to bring back the leader, but my legs weren't quite fully ticking over, with the wind and downhill obviously I was travelling quickly, but not making in-roads in the leaders advantage.  On the long downhill there are 2 sharp left turns that then go steeply uphill for about 100-150m, before the downhill continues, they were killers, but also a good chance to see how much lead I had over 3rd place.  I could see that 3rd was further behind me that I was behind 1st, so I had a fair lead.  Soon enough I got to Harxheim and turned left up the big hill of the day.  It was a really hard slog up there, I did have it in my head that I was overtaken on an uphill in my last hilly race, and that worry wasn't helped by the fact that the guy who passed me last time also had moved into 3rd place behind me this time!

I finally got to the top and was pretty confident of making it home without being caught as it is generally downhill until the last few hundred metres.  I got onto the home straight and gave the peace signals / 2nd place signs everyone as I crossed the line in 38:57.  I can't complain too much as that is all I could give, I guess I underestimated the toughness of the course.  The result, though not what
I wanted. 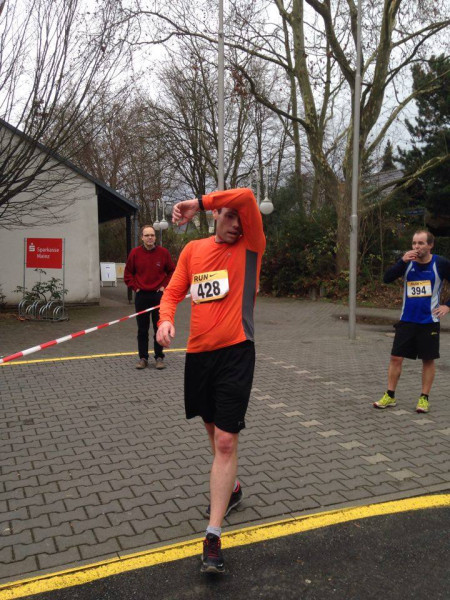 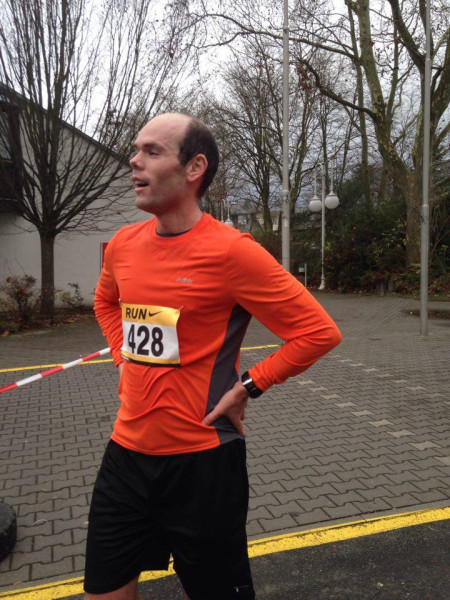 I waited to see Andre cross the line in 48minutes, a great time for him as he had been working with 50 mins as his dream time, then came Ronald who was pointing to his knee, and seemed happy to have got around the course in one piece.

I might do a silvesterlauf somewhere, depending on where we are and if they fit into our silvester (NYE) plans.  I do have a few goals left on my 2015 list that I can try to take down, for example an 18min 5km and getting to 2500km running in 2015.  I need 114km more to get to that mark, which in 2.5 weeks should be easily doable, even with Christmas in the meantime.  The 5km might be a bit more tricky.  Somehow I had thought that my goal was 18:30, so as I have done splits in 10km races at that pace, it was essentially done.  18mins is actually quite a tricky prospect, it is obviously doable but it is pretty much full race pace.  I think I will head down to the track some time soon when I am feeling good and give it a go.