Five weeks since my last race! Five weeks, that is a long time for me.  I would normally have raced at the end of February, but we were away in Cagliari, so I have just been getting stuck into training for the last 5 weeks.  2 weeks ago I did my best long run ever, a 36km run with 2x5km just faster than goal marathon pace, some hills and a final average speed of 4:30/km.  I was flying all that week, but then the following week I started to feel the fatigue. After a slow 30km run last weekend I was absolutely bushed, so took the week up to Frankfurt half marathon as a down week/ mini-taper to get ready for the race.

I only had 1 half marathon in my schedule before Rotterdam and there is only one goal for me in a half marathon, and that is to run sub1:20.  For some reason that has always been more of a dream for me that a sub3 marathon, maybe because it was always close enough to be a realistic long term goal, but was always far enough away that I knew it would be hard work to ever manage it.  Last year I surprised myself in Rheinzabern by running a 1:21:51 in a near perfect race for me.  That was great, but it was still 112 seconds shy of a sub1:20!  This year my best 10k was slightly short of being equivalent of a 1:20HM, so finally breaking through that barrier was not a given.

So to the race.  I got up and ate some plain white basmati rice and my normal omelette for breakfast, 3 1/2 hours before the race.  I got the train there and got signed in no problems.  The toilet situation is surprisingly bad at Frankfurt, especially when you consider that it starts and ends in a 50,000 person seater stadium!  I managed to get ready anyway and walked into the starting pen from the front, so I could start without having to pass lots of people.

I ran into 2 fast runners from my triathlon team in the corral, Stephan Jung and Heiko Braun.  They are both fast and told me that they were aiming for 1:20 too, so we could run together, excellent.  After about 2 seconds of pre-warning, the gun went off and we were underway.  There are a few sharp turns in the first 400m which aren’t ideal, but they were soon over.  The first km was slow in 3:55, the goal average was 3:45.  After the first km, we got into the right groove and started knocking out 3:4x after 3:4x kms.

It was pretty damn windy during the race, and between about km 3 and 7 we run next to the Main river, and directly into the wind.  There always seemed to be a group just ahead of us, but we were never in a group, or at least not leading a group, so we had to accept the wind in our faces.  After 5km there was a drinks stand on the outside of a 90 degree turn, I let that be.  After 10km there was another, but they had either water, sparkling apple juice or tea.  If you want sugar in this race, you will have to accept the carbon dioxide that comes with it! 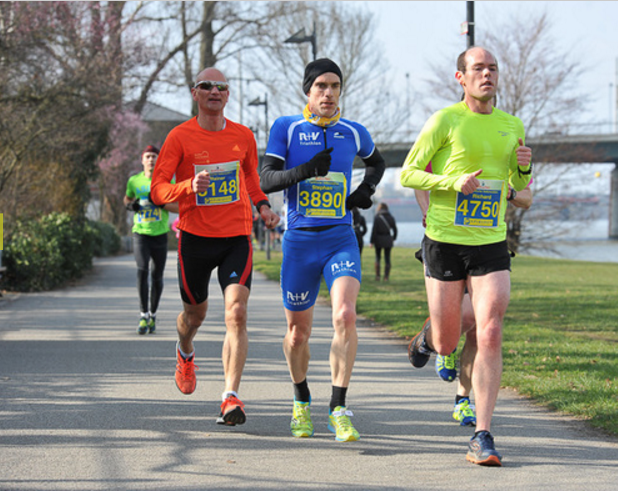 Just after the drinks we turned away from the wind, and I felt really strong.  We were 15 seconds or so behind schedule, but against the wind that was better than fine by me.  Unfortunately Stephan couldn’t keep pace anymore, so I carried on alone, with Heiko having dropped back a few km earlier.  I caught and overtook a lot of people and felt very relaxed.  I was trying not to push the pace too early, in case I blew up and lost my sub 1:20.  After 14km there is a slight incline, that came and went and after 16km I decided it was time to push on.  The stadium was soon in sight and my dodgy maths was telling me that sub1:20 was in the bag, then telling me it wasn’t, then that it was again!  It was only really after 20km I knew I had it, the last part seems to last an age as you run around the stadium for over a km.  I entered the stadium and sprinted in the last 80m and crossed the line in 1:18:56, unbelievable! 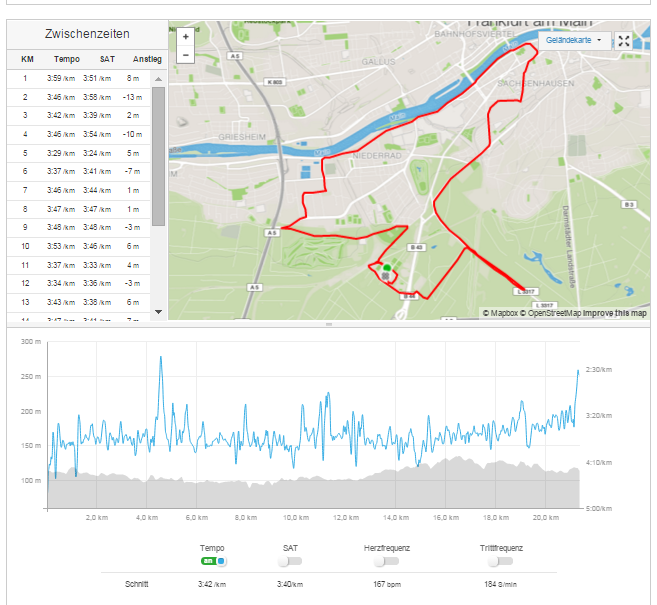 2 years ago I ran a 1:29:57 in Frankfurt to break 90mins for the first time, today I was over 11minutes faster!  I was, and still am, so happy with how it all went, my hard work in training has really paid off and my long term goal has been achieved already!

Next up will probably be Rotterdam Marathon on April 10th.  I have 4 weeks now and I plan to do 2 big weeks, then 1 medium week and a taper week before the race.  I am thinking of shooting for a 2:50 marathon, i.e. run the first half in 1:25.  I don’t want to start too fast and blow up, so, much like today, I think I will go conservative and speed up at the end (if everything goes well!).  See you then