We got to Holland on Thursday afternoon ready for my first sub3 and stayed in Rotterdam on Thursday night.  On Friday I signed in to the race and headed to Den Haag for 2 days. That was a good decision. Den Haag is a really nice town, and only 25 mins away by train. So even on race day I could travel over without problems. 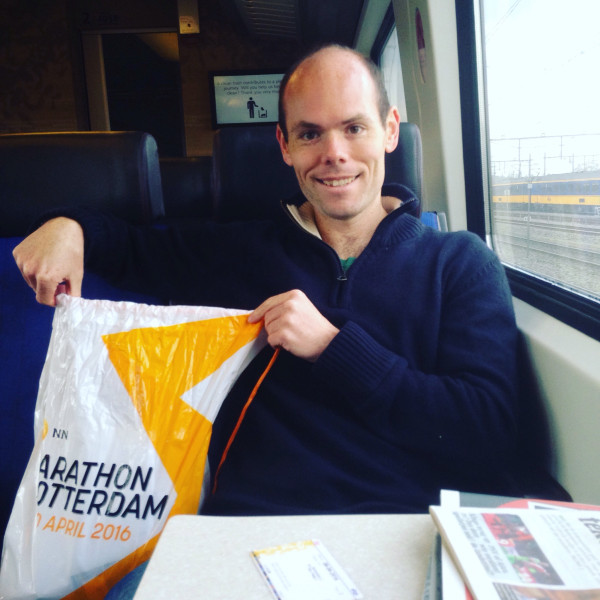 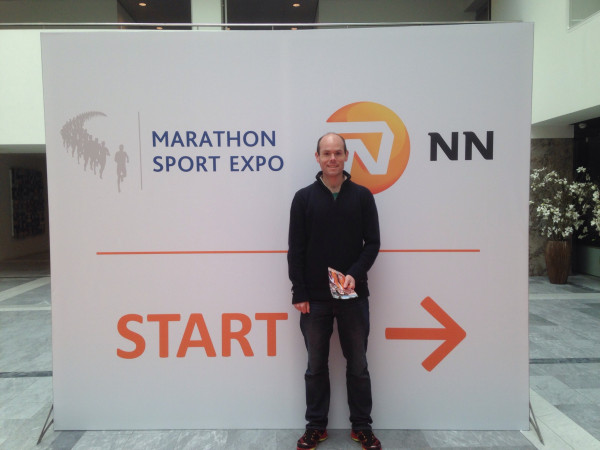 I tapered quite a lot.  On Thursday I didn’t run (but walked quite a lot), and on Friday and Saturday I ran with Katja in the park, doing a few strides on Saturday to be race ready.  Diet-wise it probably wasn’t ideal as we were away from home. We were eating out and enjoying the buffet breakfast in the hotel.  I tried to control myself and keep my fibre down. No spoilers so I won’t say now if that was successful or not!

So to the big race, the big day.  I have certainly put in more miles than ever before. I have smashed my 10k and HM PB, now I set myself a goal of sub 2:50 for the marathon (sub3 was an absolute minimum).
. 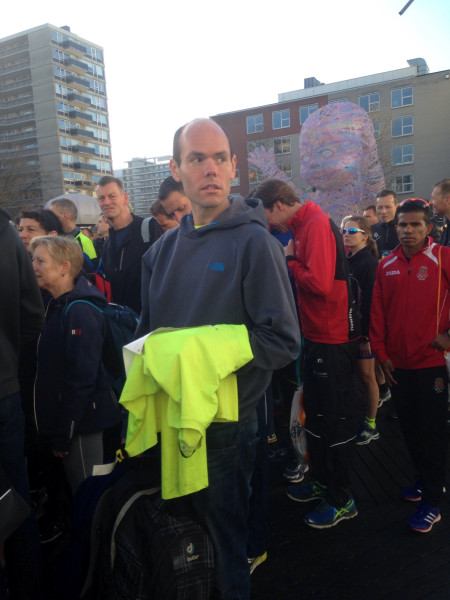 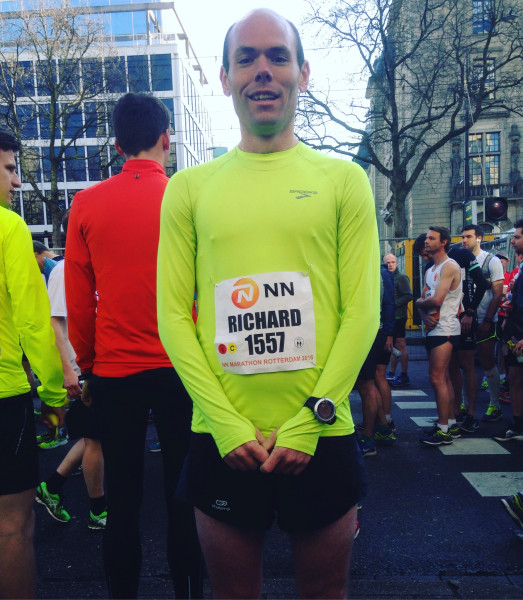 After struggling to get to the toilet before the race (there was one real toilet and 4 urinals in the whole corral!) I luckily managed my last pee 2 mins before the start!  Even though I was in a forward group, group C, we got out a little slow.  I soon managed to find a little space and I was happy enough to get my GPS pace down to 4:15 pretty quickly.  There was no KM marker in the first 4km. That made accurate pace keeping a bit difficult!  I was overtaking quite a few people though and I got over the bridge, which was a surprisingly long climb, in good order.

Fairly spontaneously I decided to start a lap on my watch after every 5km. That meant I could make sure that I wasn’t drifting from my goal pace without noticing it quickly.  Through the first 5km my time was about 20:40. That’s much slower than I had planned, but was the pace that felt right at the time.  It was a little disappointing to see that my HR was about 160, even though I wasn’t going at goal pace.

I settled in anyway and between 5km and 10km was pretty dull and seemed to take a long time.  Really I wouldn’t say that it wasn’t a very interesting race to be a part of.  I knew that I wasn’t feeling on top form, so I was managing my pace and just waited for the kms to tick away.  I got through 10km in 41mins, so about 30 seconds down on goal time, no biggy, but not ideal.

After about 16km, I noticed that I was going to need a portaloo break. In the first 2 drink stations I could only find water, I had taken my gel after 9km, then at 15km I found the energy drinks (they were right at the end in different cups).  I decided it was go time, so I ran until seeing a toilet, jumped in and was done in about 20 seconds. No real harm done.

I started to take the energy drinks at each station as there was nothing to eat, and I had only brought one gel with me.  They didn’t seem to agree with my stomach much though. Fortunately it wasn’t always leading to a toilet stop!  I got through the half way point still feeling comfortable in 1:27:15 or so..

I had already decided in my head that 2:50 would have to be for another day and today would be a comfortable sub3 run.  Going for a faster time could have ended badly.  After 27km or so we went over the big bridge again, I saw my heart rate make it’s first real move above 162-3, but I got it back under control.  I had hoped to see Katja sometime in the town, but it didn’t happen as the course didn’t go where we had thought it did.

There is a second, non-repeat, loop in Rotterdam.  After 29km I saw almost exactly 2h on my GPS, and after 30km we ran on the otherside of the road from the 40km sign, ‘oh to be there already’ I thought to myself!  I still felt like I was cruising. I was overtaking a lot of people at this point.  So much so that it was quite difficult to keep the correct pace. Everyone seemed to be going backwards!  After 32km I started with some negative maths in my head. I could run the last 10km in 47 minutes and still do a sub3. I should be able to do that!  As each km passed I could look and see that an even slower time per km would now give me a sub3. I pretty much knew that it was in the bag.

After 36km I felt some more movements going on and knew the portaloo was a calling.  I was feeling a bit uncomfortable running and was probably losing time, so as soon as I found one after 37km I was in and sorted out that problem.  With 5km to go I was happy that I could run problem free to the end. I’d also decided that I wouldn’t be sprinting it in as fast as possible!  The kms ticked down and there were ever more timing mats!

Soon enough I could look over and see the 30km marker on the other side ‘damn I’m pleased I’m not over there’ I thought to myself!  The last 2km were pretty much ok. I was constantly calculating and giving myself ever easier time goals, like 6 mins for the last 1.2km or 2 1/2 mins for the last 500m!  The finish was in sight and I was so happy it was nearly over.  I saw my Katja at the side of the road which really made me smile.  An effort was made to smile generally for the last few hundred metres so that any photos or videos look a bit better than normal.  I crossed the line in 2:55:32. 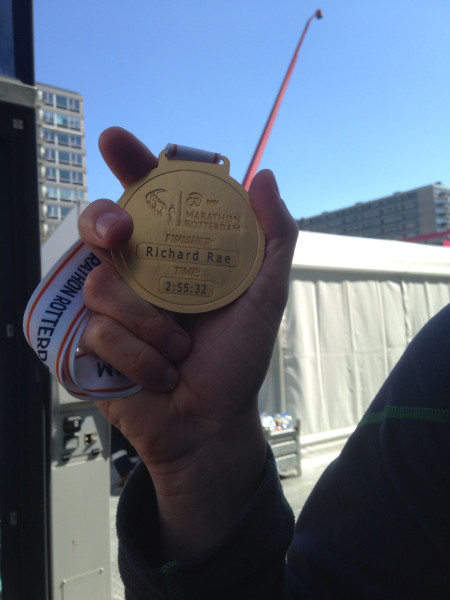 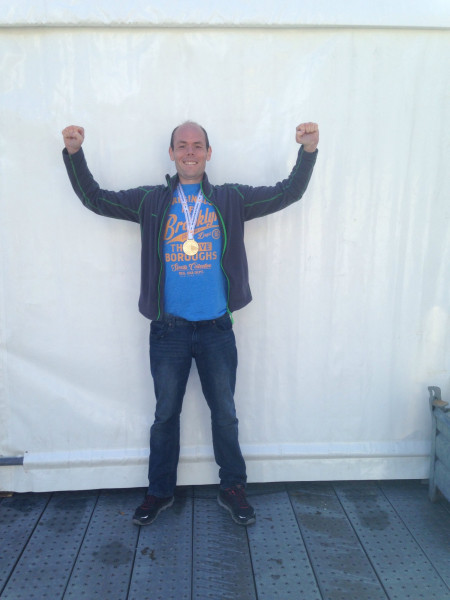 There’s quite a big area after the end of the race where there are no drinks or anything to eat, and you also can’t get out!  I got my medal and had a little cry.  It wasn’t a sad cry, I was just tired and happy to have done a good time, I know it is a good time, it might not have been my goal time or what I should have run, but it is still a damn good time!  I had a little chat with some of the other finishers. Some over the moon that they ran 2:55 when they were hoping for just sub3. Others gutted that they ran 2:53 when aiming for 2:40!  The weather was really good for running, but it was a cloudless day, meaning I found it pretty warm.  Others seemed to find that too.

I think for the future I have to work on my pre-race, and during race diet.  I have bowel problems when I run, I know that.  Last year for my long distance tri I ate italian the night before the race. It’s low fibre, easily digested and caused no problems.  This time I felt bloated and think it was too salty for me.  I will look for an airbnb for Berlin so that I can cook exactly what I want the night before and morning of the race.  I also got a packed meal from the hotel the morning of the race. It was nice of them given that I wanted to eat before breakfast started serving, but cheese and turkey sandwiches wouldn’t be what I would choose at home, an omelette and rice worked perfectly before Frankfurt Half for me.

Anyway, enough of the epilogue. My triathlon season starts (gently) on Tuesday.  I will run Berlin in late September so I plan to keep running more than I did last summer. Although the race itself today wasn’t too much fun, I feel much better than I did after Bonn or Frankfurt.  I expect a break through race sometime, so maybe Berlin will be the one. Sub3 is in the bag so sub 2:45 anyone???