I hadn’t raced in a while, not since Rotterdam actually.  I took 1 down week after Rotterdam and then got started on triathlon training.  I have been aiming for 70km per week of running, swim 3 times a week and do what I can on the bike.  Training seems to have been going well, my legs aren’t too happy about the cycling, but swimming is coming along nicely and I am running far more than I usually do post-marathon.

So to the race.  I did this race last year, it is a hilly 14.3km affair.  I cycled to the start in Framersheim, which is about 30km away.  It has been a fairly mild winter, it was rarely really cold, but it also hasn’t been warm at any point in spring, up until now!  There wasn’t a cloud in the sky and it was 25 degrees, a bit warm for my north of England blood.  Anyway before the start I had a good chat with all the regulars and lots of fast runners were there, and most on form as Mainz marathon is in 2 weeks time.

We got started after a little technical problem, and the really fast 3 guys were away in a front group almost immediately, there would be no podium for me today!  I was running with 4th place and feeling quite comfortable, we started to climb the hill and he started to move ahead slightly, no biggy, but not ideal.  I ran through the water station after about 4km, no time to drink in a short race I thought!  Soon enough I was regretting that decision as I started to really feel the heat, and accordingly slow down.

I got passed by Peter Mertel, he is aiming for a 2:50 marathon in 2 weeks time.  I held it together and on the decent he was still pretty close to me.  I really considered switching to the 8.6km race, instead of going back up the hill for the 2nd loop, but when it came to it, I couldn’t do it, so around I went again.  This climb was just bad, I had already stopped at the 2nd water station to drink and throw water on myself, but I stopped again at the 3rd to drink again.  Max Gasser passed me near the end of the climb, I wasn’t feeling good at all.  Eventually I got to the top of the climb, but I felt like I was laboring on the flat afterwards too!

I looked around and saw that no one was close behind me at the top, so I thought I could cruise the downhill to the end.  I stopped at the last water station and drank again, then could enjoy the last few downhill kms.  With about 2km to go, I noticed that someone was behind me now.  I had no fight left in me, so expected him to go by quite quickly.  I reached the last little steep uphill that is about 1.5km from the end, with my pursuer right behind me.  I waved him by in a sign of surrender, when suddenly something made me give a full sprint up the hill to try to break him.  I gave it a real go and looked back and saw that he wasn’t on my shoulder anymore.  There was then a flat few hundred metres to survive, then a downhill to the end.

On the downhill I was going quite well, but could hear and soon see that my pursuer was back.  I decided with maybe 600m to go that I would give it everything to sprint now while he was still behind me, in the hope that I could crack him.  I well full out, I could hear that he was sprinting too, but after maybe 400m I looked back and he was gone!  I was happy that I could cruise in the last 200m, as I was really burning up. 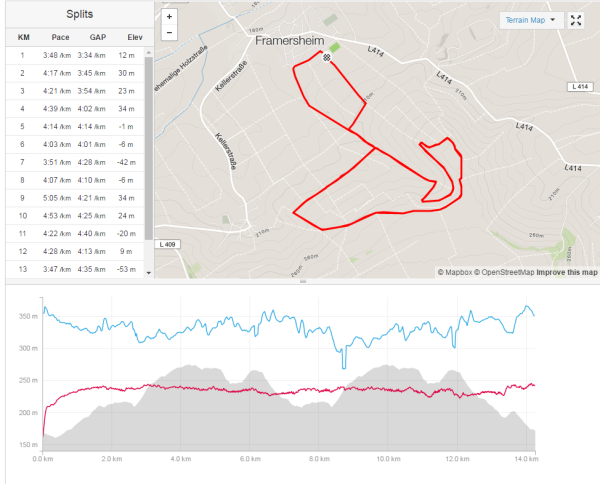 I finished in 1:00:40, which is a full 3 minutes slower than last year.  I felt dreadful and sat in the shade pouring water on myself for about 20 minutes before heading home!  I should have eaten something, as I was pretty close to bonking on the way back, but luckily I was home before it really got me.

So, what to say?  I worry a little about my performance as it was pretty poor and 3 minutes slower than last year.  I am at a good weight for me (78.0kg) and am running plenty.  I haven’t been taking iron so religiously, so maybe that is something.  I know that I am not a warm weather person too, I think I could have done a flat 10k at that temperature, but the uphill and extra distance just destroyed me on the day.

I think I will run Mainz half marathon in 2 weeks, if the weather is cool, and see how I am doing then.  Better not to read too much into one bad race….