I wasn’t certain about doing this, the race and/or the blog entry, but at the end of the day it looks like I am doing both! So whatever, lets do this!

I found a cheap start for the half marathon on Friday afternoon. It was from a 30 something guy too, so I decided that I wouldn’t pay to get my name in the results list.  My running has been reduced a bit since my marathon. Quality has pretty much been stopped, or at least not organized quality. I have been doing some quite fast Bricks after my bike rides.  I think I’ve put on 1-2kg too, which obviously isn’t ideal.  My allergies have been playing up too, so have been on loratidine which might explain some of the water weight. Anyway, I got my number on Saturday, ran into loads of people I know and talked down my race, especially given that it would be warm on Sunday, possible up to 27 degrees.

On Sunday I woke up and had a sore throat and a head ache, perfect.  I took an Ibuprofen and ate my omelette and rice 3.5 hours before the race, just like before Frankfurt half.  I got to the start at 9am for a 9:30am start and had a team photo with the TCEC guys.  Then I went to the meet up point to see Jochen, Judith, Katha and Chris. I only actually found Jochen und Judith as I was a bit late.  After checking in my bag, it was already 9:25 and I needed to get to the start.  I wasn’t too worried as I wasn’t going for a PB, so traffic wouldn’t be the end of the world for me.  Luck was on my side and I got a decent spot and was soon underway to the tune of Highway to Hell!

I started cutting through the crowd in front of me and saw lots of people I know.  I said hello to them all. Sometimes I even ran across the road to get to them!  After finding some TCEClers, I had a chat before heading on at my comfortable pace.  After about 2km I saw Jochen ahead. He wanted to run about 1:25 and seemed about on pace.  We ran together for a while and I wanted to see if I could hold that pace in the heat.  I think I might have been aggravating him a little. I was cruising with a 160HR, whereas he seemed to be nearer the limit.  After 5km I noticed that the pace, and my HR, was falling.  After 6km I decided to head on and leave Jochen to it. I doubt he wanted me to hang around if he was suffering. 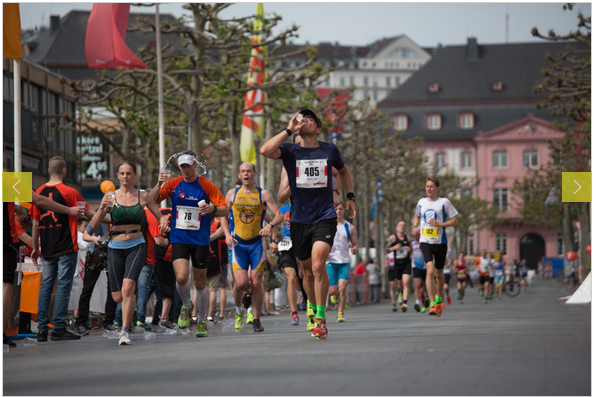 I passed loads of people and didn’t ever get passed.  My HR was in the 160s and felt fine. I mean it wasn’t easy and I was warm, but it was all under control.  Somewhere in the Neustadt I saw a college of Katja, who I recognised, I spoke to her but got pretty much ignored. That’s the first and last time I speak to her!  In town after about 12km I saw Katja, who was on her way to do the last part of a marathon relay, it’s always good to see her when I am running.  In town it started to get a bit more spread out. I overtook Max Gasser who was also going for a sub 1:25, revenge for Framersheim!

Soon enough I was in Weisenau on the incredibly tedious Wormserstrasse where I was a spectator last year.  It is about 2.5km out, then a 180 turn and 2.5km back.  I hate long turn around. You can see the faster people way ahead of you, and know that every step you take you have to do again in the other direction.  I got to the turn where some TCEC supporters were waiting and made my way back towards Mainz.  Though the temperature was rising, I never really felt bad.  After 20km I looked at my total time for the first time and saw that I was on a borderline 1:25.  I decided to speed up a little to guarantee that I would go under, without having to sprint at the end.

And over the line

I crossed the line in 1:24:50 feeling good.  Who knows how much faster I could have gone. I guess a couple of minutes and in cool weather a bit faster again.  It isn’t too important though. I enjoyed the run a lot.  I waited at the finish area to greet people as they finished.  Lots of people seemed to struggle in the heat, some even passed out of needed medical attention at the end, someone was sick right next to me! 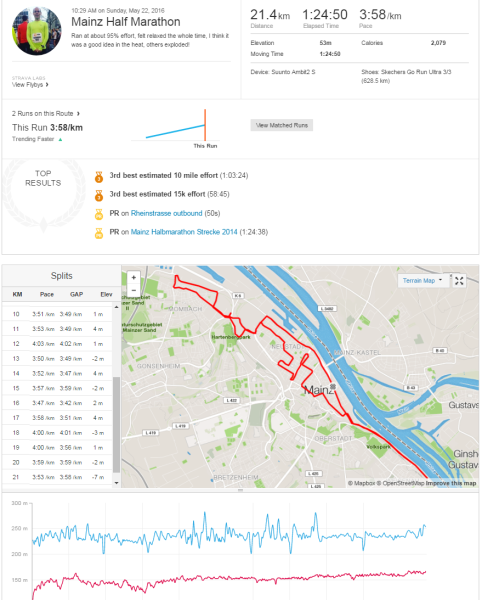 After a good hour or so, I got changed and walked to Schott ag to see Katja before she started her run.  It was a bit further away than I expected, but was still ok.  After she set off, I walked back to the finish area. I managed to get photos of her running on 4 occasions, not bad!  She seemed to really enjoy running without the pressure of going for a PB too.

I am considering putting together a relay for next year, or doing the full marathon, even though it seems very lonely for the faster runners on the 2nd loop.  I did notice though that the Mainzer Marathon Meister ran a 2:58, I know the weather was bad, but I could have a chance at that!  That would be pretty cool if you ask me, we will see, maybe I won’t live in Mainz in 1 years time!

Next up the bum-tingling Darmstadt Sprint Triathlon in 2 weeks.  It’s a draft legal, regionalliga sprint tri.  I could come last if I don’t have a good day. My fear is that I get out of the water last, then cycle alone, whereas others are in a group. Then the run will be irrelevant!  We will see what happens, but I am scared, oh so scared!