So, I set off at 8am to get to the train station for 8:33am.  I managed to leave my sun glasses on top of the cash machine and met up with Robert to get the train. We found it easily and were there 2h in advance.  We had time to watch some of the races start, check out the transition areas and warm up, before watching the 2nd Bundesliga swim and having a little warm up swim ourselves.  The 2nd Bundesliga guys were pretty amazing, they couldn’t wear wetsuits but the fastest swam 9 minutes and the slowest swam 12:20, crazy.

Anyway, my race started with the dive in, my goggles stayed in place and I tried to find a group to swim with. I could immediately see that almost everyone was swimming away from me. A guy next to me was swimming into me all the time, or I was swimming into him, or we were swimming into each other. It was pretty annoying, we hit each other with every stroke!  I saw that he had a yellow swimcap on, I had a feeling it was Robert, my TCEC team mate, it turns out that it was!  In ever clearer water I continued on, it didn’t feel like a nightmare swim, but everyone was ahead of me.  Swimming the last few metres, I decided to sprint it in as I wanted to overtake the guy next to me, in case it was a race for 2nd last out of the water!  As the start had surprised me, I hadn’t had a chance to start my watch, so when I finally got out of the water, I could just see that my time was between 13-14 minutes, not a nightmare, not a dream.

I ran to my bike and struggled to get my wetsuit off.  I could see that 1 TCEC bike was still in transition, so I wasn’t the last swimmer!  I got going, dropping my bike once, then ran up to the start line.  Flying starts aren’t something that I have practiced, and it showed! I eventually got my feet in and caught a guy in front of me, and sat in behind him.  I was quite happy with this situation, so I took the lead so we could work together, then when I waved him through, he said he was waiting for a friend.  I continued on alone, only for him and his friend to catch up a few minutes later.  I got on the back of the group, again pretty happy with the situation.  Then came a moment, the faster rider started to drop the slower rider, he asked if he should wait, and the slower guy said no.  He rode off, and I didn’t go with him, I stayed with the slower guy, who in all honesty was probably faster than me anyway! 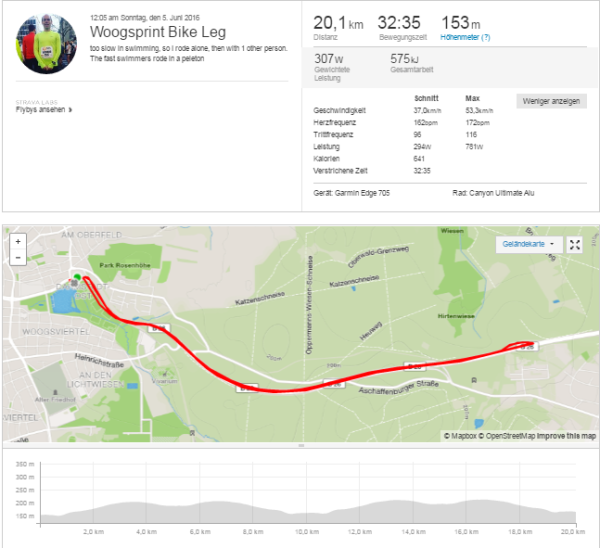 We rode together for the full ride, and we shared the work, maybe not 50:50, but we shared a good bit.  He kept on passing me like he was attacking though, it was pretty annoying, having to sprint to get back on every time!  He didn’t seem to get the idea of working together, but whatever.

I got off the bike after what my gps said was 32:30, but the official results say was 33:20.  I got my shoes on and set off on the run, I was feeling very flat, gps was pretty useless due to the trees, but it looked like I was running 20min pace, pretty crap.  After what seemed an age I passed the 1km marker, I actually checked it as I thought it must be wrong, but it was right, only 1km done.  On the 2nd loop I saw Sebastian Dahl who was a good bit ahead of me, and later Jonas, who was also ahead of me, but I seemed to be catching.  Robert was behind me, but by more than 1 minute, even though I was feeling flat, I didn’t think he would catch me.  The rest of the run was pretty uneventful, I started to feel ok when I was in the shade, but in the sun it was a bit warm for me.  I saw that I was going to be faster than 20 minutes anyway, maybe about 19, so that was something. 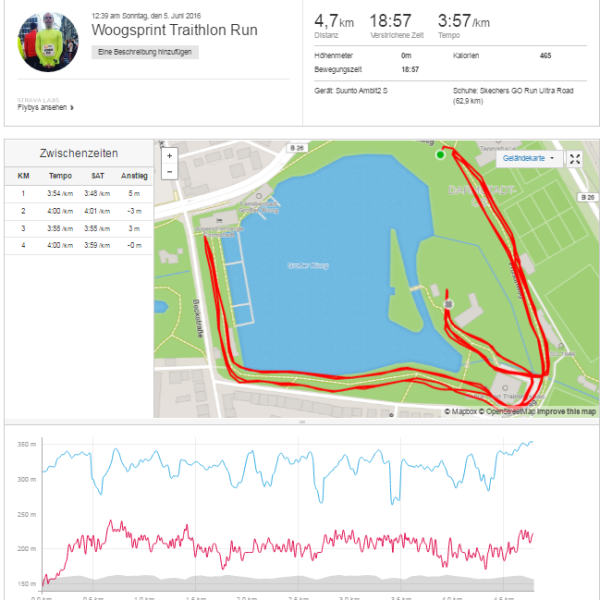 I knew it wasn’t a race for me, and it wasn’t, but I did finish 3rd from the 5 TCEC starters, so my being there did help the team.  One of the guys binned it on the bike, because he felt like he wasn’t having a good day. I wouldn’t pick him to do another TCEC league triathlon again, but that is just my opinion!

Anyway, I have messed up my planning for the next month pretty badly.  It looks like I won’t start in Worms, as I have Rudern gegen Krebs on that day.  Rudern is far less important to me, but without me they don’t have a team, whereas TCEC do have a team without me.  That means I won’t have another Tri until August, which is a shame, though I might find a local race that I can get a good placing in, so that I start to feel like less of a loser than I do now!

Though I have little cycling under my belt, I think the Maratona will be fine. If I could break 6:30 that would be nice, but that could be very traffic dependent.