So week 2 was a good one, so the plan won’t drastically change this week.

Run at least 4 times
Cycle: 2 times but I need to get a real longer ride done. I’m not talking 150km here, I’ll be taking baby steps, but 4 hours would be a decent start.
Swim: I might as well keep on with the 100m more each workout routine. so I expect 2 workouts of 1.9km and 2km.

I think I will try some TCEC things this week too. The ones that fit best are running on Tuesday and Swimming on Wednesday. Depending on what we do on Tuesday, I’ll either do my 7x1km or the hilly treadmill run on Thursday. Saturday long ride and Sunday long run seems fair enough. That leaves Monday and Friday, one will be a swim, the other an easy outdoor run. I might tag on an easy 5km run after the gym cycle again as that seemed to work.

These obviously aren’t set in stone, I could try to cycle on Wednesday, then go to swimming and take a day off! Let’s see how I feel and, nearly literally, where the wind takes me!

Right, where were we? I'd knocked out 4 workouts on Monday and Tuesday, Wednesday went as planned, 11.6km outside run in the cold and dark. It felt really easy, as evidenced by my HR average of 136, but the average pace was a decent 5:18 so that will do for my easy run.

On Thursday I was at the gym again. I did some strength work on the legs and the triceps, before getting on with my hilly treadmill run. I failed on this run last week, so I was happy to have fairly cruised through it this time. There was one very brief stop, but that was only because my shoelace came undone. It was still a hard effort, but I think and hope I can do this exact workout a few times more, before trying to increase the pace a little.

On Friday I went to Taubertsbergbad straight after work. I'm under no allusions about my swimming, it is pretty rubbish, but I am trying to build into it instead of knocking out 3k now and never wanting to swim again, I started with 1.6km last week, then 1.7 and this time 1.8km. I was experimenting with holding my breath for longer underwater, instead of immediately exhaling. Having the air in my lungs should keep me more buoyant, which in turn should improve my body position. I felt like there was something to this, but I wasn't feeling comfortable with it. I will keep trying. I did 100m sets, almost all around the 1:52 mark, the fastest was a 1:47. I turn like a boat, so I don't think I am faster in a 25m pool than a 50m one!

Yesterday should have been long cycle day, but it was blowing an absolute gale, so I ended up doing 90 minutes on the trainer whilst watching 'Remember the Titans'. It wasn't exciting, but a decent workout too. I am getting worried at the prospect of 250km early in April, I need to get some long outdoor rides in in the next few weeks.

Today I ran a bumpy 30km route. Pretty much everything that made last weeks long run bad, didn't happen this week! No toilet breaks and no chafing, I also didn't really fatigue too badly. It was really windy, and at times I wanted to head home and settle on 25km or so, but when it looked like my route was going to get me back after 28km, I decided to both go further and speed up! I plan to add something to my long runs, i.e. 1 fast km, 1 slow km and sustained efforts at marathon pace, but today's one was a good one, especially considering it wasn't flat at all! 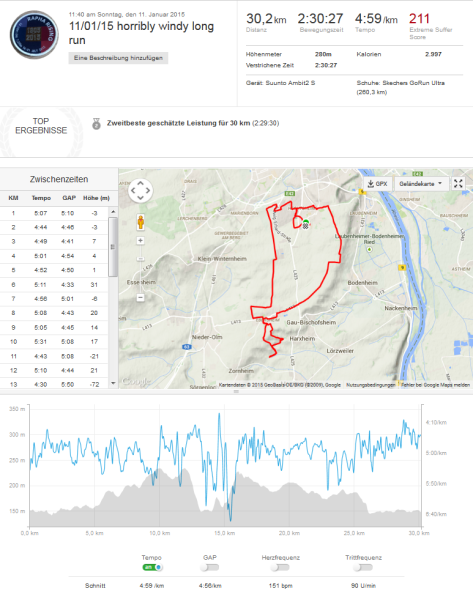 I’m bored at work, so here is a midweek update.

On Monday I wasn’t feeling it much, I was hungry after work, but as Quatchy was already at the gym, I kind of had to go in too! I was happy I did though, I did 1 hour on the spinning bike, it’s not the most exciting thing in the world, but I found the 25 minutes moderate difficulty followed by 5 minutes easy not too bad.
To keep the marathon training ticking over I did an easy 5km on the treadmill at 11kmh without any incline. I think that if I hit my 3 workouts (1km intervals, hilly intervals and long run) every week, I will only do really easy runs outside of those.

On Tuesday I was more motivated and went straight to the gym and went for the 7x1km intervals. It was done exactly as I planned, 15km/h for the 1km interval, 8km/h for 250m as a rest. The first few were easy, the last ones were quite tough, but manageable. I had to rush to get home, eat and leave the house to go swimming. Swimming was pretty good too. I tried to use my legs more consistently and really reach out with my hands. I was generally doing 50m sets with a short rest. I was seeing some 48 second 50m lengths in the middle, with one 47 seconds. It started fading off towards the end though, so I think the 1.7km was enough for the day.

Lets see how this week goes and maybe change things around for a better fit next week.

The diet is going well. On Monday I ate a few chocolates and a bit of cake at work, otherwise I haven’t eaten badly at all.

Well week one was a short one for the blog, as it was only 4 days, but for the stats I’ll use the whole 7 days.

Running wise it wasn’t great, my long run of 24km was interrupted for about 15 mins by looking for a toilet, that ruined my rhythm and I didn’t feel great for the 8km home. My hilly treadmill run on Thursday was also a bit of a failure, I couldn’t hold the 11km level 5 hills, hopefully it is just a post Christmas lull.

I didn’t get much chance to cycle, partially because it is damn cold outside and partially due to laziness, I should have cycled 2h yesterday 🙁

Swimming, well I am back in the pool at least! Jantastic means I will have to swim at least once a week, but I want to do 2 a week and some strength work on the other days. My GPS watch should be interesting as the year goes on, I could see my first 50m of a 100m interval was often 53s, but after 100m it was always 1:58 or slower! Am I really swimming 12 seconds slower on the second half? If I am then maybe muscle endurance is the main issue for me, not technique.

I also did strength training at the gym 3 times, mainly legs and core, but some tricep work too.

So the plan for the next week: Swim tomorrow, intervals or TCEC run on Tuesday, Cycle on Wednesday, hilly treadmill on Thursday, Cycle on Friday, Swim on Saturday, maybe with extra cycling, then long run on Sunday. I know there are no rest days there, but Monday and Saturday are swim only days, so they shouldn’t overly tax me. Now that I look at it, I see only 3 runs… I will have to tack on a run after one or both of the cycles, just easy runs, but 3 isn’t enough..

I weighed myself this morning, I didn’t do it yesterday because I though NYE would skew the results! So after a heavy Christmas of eating and drinking, I am 81.3KG. Goal 1 has to be to get to 77kg, definitely before Frankfurt half marathon at the start of March.

I ran outside in the snow last night, 15.6km nice and slow. I will do the running totals at the end of the week, but 60km+ running, 100km cycling and swimming twice would be a decent start to the year.

Well 2015 is upon us, and I want to chronicle my training year leading into my first long distance triathlon in Köln in September. I think it is too far away to really stress about now, so I plan to break this year into parts.

Part 1: Running season – Now to start of May – Run lots and do a few 10ks, half marathons and a marathon. There will be some cycling and swimming in this phase, but it is of secondary importance.

Part 2: Cycling season – Start of May until July – Cycle like I did for Marmotte training. i.e. 300km+ every week, possibly 2 long rides on the weekends and 2-3 50km rides during the week. Running will go down to 50km a week. Swimming will be increased in this phase in Freibäder.

Part 3: Bringing it all together – July to September – Now I can worry about Köln! Run more and cycle less, but keep volumes high. Lots of bricks, some high intensity. Increase swimming if possible.