Sorry, sorry, I a writing this late I know!

So last week was a good one, maybe not quite as good as I had ambitiously planned, but nonetheless good.
I had really tight calves for the first half of the week after my half marathon on Sunday. I didn't post it last week, but I picked up my TT bike last week. It's a Canyon Speedmax Al, ok I know it isn't the most expensive bike in the world, but it looks class and I am sure it will be fast when I finally get a chance to ride it! 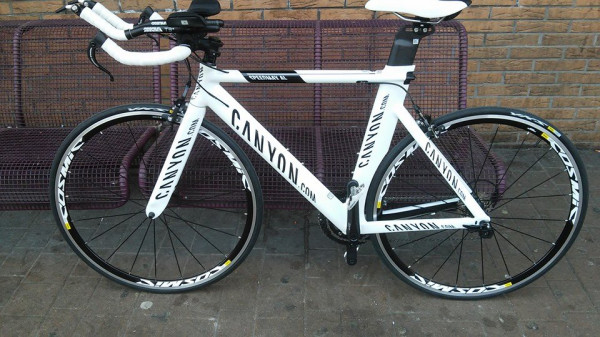 So onto actual training. Monday I cycled on my road bike for 38km in the evening. It still gets dark pretty early in the ride, but I really enjoyed it. On Tuesday I got up before work and did my 11.6km route at 4:51/km pace, quite decent, again I started a bit slower but soon got going and even had some at marathon pace or above at the end of the run. In the evening I cycled to mombach to swim… That was the low point of the training week for me, I was slow, I got leg cramps and to be honest with you, I just couldn't be bothered with swimming. I love the feeling of being outdoors when I run or ride, I get so bored swimming back and forth. Anyway, enough of my bitching, I swam 1.5km wuhoo!

Thursday I ran before work again, it was a bit slower, but just a nice easy 4:57/km pace. I was a bit tired on Thursday evening, so had the evening off.
Friday I tried out the after work long run. I will spare you the details, but my stomach was almost as bad as last time I did my long run after work 🙁 With a good few pauses I ran 30.7km with 10.7km at just faster than 3h marathon pace in the middle. It felt quite tough in the marathon pace part, but the route I run is far from flat. I recovered really quickly after the faster part so could easily jog it home at 5:00/km pace.

On Saturday I met up with Jochen and Dimi for a cycle. These rides are always a test as they are pretty aggressive riders! It soon became clear that Dimi had come through winter with the best legs, and that Jochen isn't quite on form yet, and I fell in the middle, but not far behind Dimi. The climb to Ebersheim after 100 cold km, was interesting, I had decided to give it some as had everyone else apparently! Dimi shot off as he does, but I started to gain back to him, unfortunately once the gap got to about 10m, it stabilized and I couldn't get on his wheel, like I said to Jochen in the ride, we'll get him later in the season! The ride ended with 111km at 28.1km/h for me, a nice ride just spoiled a bit by the cold and wind.

Sunday I ran a few km in the morning, but my stomach was still playing silly buggers, so I came home after 8.5km and called it a week. I decided that I need to look at my diet to solve this ever worsening stomach problem. 1st test is, no more sweeteners, no more multivitamin tablets, no more oranges, no more quark 🙁 and no milk in my coffee at work. Lets see what that brings.

I have a bit of muscle ache after yesterday’s half marathon, so that will effect my training plan for this week. It’d be nice if I could actually get all of my planned training done this week, instead of being ill, travelling or some other quasi excuse.

I think tonight I will go for a little cycle ride, maybe 50km or so, just to get the legs moving and hopefully loosen things up too. Tomorrow I want to run before work, then after work I will swim. Wednesday will be the first real run of the week, I’ll do my intervals, 7x1km as always, I’d like to do them outside if possible.
Thursday another before work run, and after work cycle would be ideal, then friday I will do a longer run with some at marathon tempo.

Saturday will be swimming and cycling, then Sunday maybe cycling and running. That would be a good week! Lets see what comes out in the wash!