As it was Easter, I had Monday off work.  I wanted to really utilise this extra free day, especially as the weather was great, but my legs weren't playing ball.  I ended up going for an evening spin of 57km, so it was better than nothing, but not really the best use of a bank holiday.  It was a fairly good example of going too hard the day before meaning I couldn't train the day after, I won't make the same mistake again in a hurry.

On Tuesday I was really tired, I went to the gym and did some strength work, then went onto the treadmill thinking I would do a hilly run, but it wasn't worth it with my legs feeling so heavy, so I ran about 3km easy and left it at that.
Wednesday was a lovely evening after work, so in shorts and t-shirt I went for an outdoor 11.6km loop.  It was really nice, and felt easy but ended up being 4:44 pace which was faster than expected.  I definitely sweat more than I have been, I'll have to be careful with nutrition in Bonn if it is warm for my marathon.
Thursday was a good one.  I worked until about 17:45, but instead of binning training as I may have felt like doing, I ate quickly then headed out for a cycle.  I did give a little bit more effort, but not 100%.  I was very happy to see that I had averaged 31.9km/h at the end of the 53km ride.  It was my first ride of the year in shorts and short arms, I really enjoyed it, even if I could have picked a better route.
Friday was another lovely evening, so I ran my extended 15.5km route at easy tempo.  I didn't push at any point but I ran a 4:48 pace with a 144bpm average (75% of max HR).  That is a pretty good pace for me whilst running easy and in the warm, so I was happy with that.  On Saturday I was a bit time crunched and wasn't too sure of what to do.  I decided on an intervals session at Willy Wacker running track.  I don't want to over do it and injure myself a week before Bonn, so I ran at 3:45/km for my km repeats.  That would have been crazy fast not too long ago, but the first 6 repeats all felt quite easy.  The last 2 were a bit tougher, but still fine, I ended with 8x1km all between 3:39 and 3:44, the run was 13km total in just under an hour, it's possibly my last intervals before Bonn, not sure yet though. 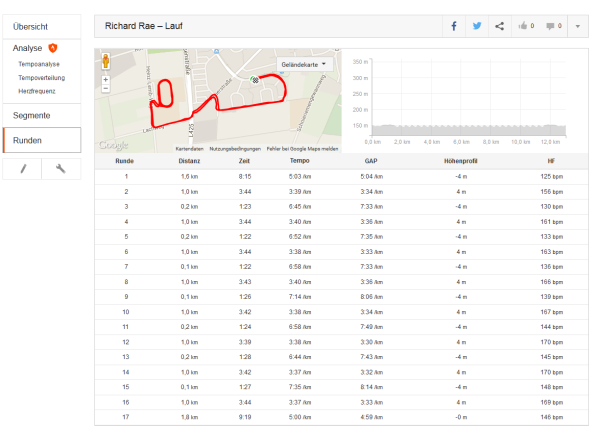 On Sunday I went for a solo bike ride.  I freestyled the route a bit, and it ended up being pretty flat, but it was 118km at 31.2km/h and 800m of climbing at the end of the day.  I am getting used to my TT bike a bit more now and feel like my position is pretty good.  My shoulders/neck do get quite tight though.  I have decided to try to power through and get used to the aero-position, hopefully it will pay dividends later in the season.  Last year in Wasserstadt I was out of aero-position a lot of the time due to my neck/shoulders, I don't want that to happen again.

And that was that, a good week of training no doubt, but again no swimming.  I was thinking about it yesterday on the bike, I will swim 2+ times a week after Bonn.  That is not a promise, but I will really try to do it.  Freibad season starts soon which will make it easier for me to get to a good swimming pool, I can also swim before work in Nieder-Olm if I ever feel obliged.  It is getting a bit ridiculous with my lack of swimming at the moment though, I will be happy with another 38m swim in Wasserstadt, but I don't want to convert that to a 90m swim in Köln like Jochen did.