On Monday I decided to go for a bit longer easy run, I want to keep the quantity up at reasonable levels, but with races every weekend at the moment, I don't want to do too much quality during the week.  So I ran 15.5km in the wind and rain at 5:18/km pace.  It felt like hard work, even if my heart rate didn't really agree with me (ave 129). Job done.

On Tuesday I went swimming, it went really well, I stuck with the longer 200m intervals, usually in about 3:40.  I wanted to swim at least 2k, but continued on to 2600m before deciding that was enough and heading home.  I used the pull board for quite a bit to practice my body position, it felt good, but made it very noticeable that my normal body position isn't great!  I was concentrating on my high elbows swimming still, I will keep that up from now on.

Wednesday was my midweek cycle.  I got a bit lost and ended up doing 71km, but it was pretty fast at 32.xkm/h.  I did try to keep the pace up, but I wasn't at 100%, so hopefully I'll be faster come wasserstadt in a month.

Thursday me and Katja went running together.  It was 9km in the wind and rain at about 5:40/km pace.  My HR was 120 average, which isn't much lower than when I run 5:00/km interestingly. I don't know if that means I need to runs slower more often of not, but it was a nice recovery run, even in awful weather!

Friday was the first day of my 1800KinMay challenge.  It was also a bank holiday so I had the day off.  As is customary, the weather was crappy so I aimed to hit a gap in the rain.  I got hit further south from mainz in the hills near Rockenhausen.  I started to get low on sugar on the way home too, so had to stop for a drink and a chocolate bar in Alzey, before doing the last hour home.  It was 130km with 1500m climbing at just under 30km/h.  It wasn't the most fun ride ever with crappy weather, cold and not eating enough, but as I like to say, it's in the bank now. 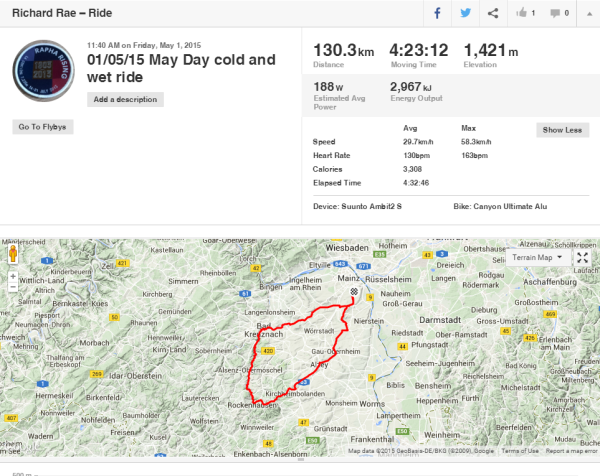 Saturday was Backeslauf day.  I cycled the 28km to and from Framersheim quite easy, but somehow it was over 30km/h each way.

Today it was raining all day and the wind is still a blowing.  (Un)accuweather said it would get better later on, so I waited until 2pm, then had to go.  It rained for about 95% of the ride, and it was windy too.  It was al least a bit warmer and I took some food with me to avoid Friday's 'situation' repeating itself.  I never really felt like cutting it short which is a good thing, but I didn't really go for it either, especially on the downhills or any corners, so my 28.5km/h wasn't too surprising.  My front derailleur somehow undid itself with about 15km to ride, so I was stuck in the 39 cog for the last part, but it was pretty much done by them, and I got home with 118km on the odometer, completing my 300km for the long weekend and leaving me only 1500km for May to ride!

So today was Backeslauf day, my first run in the Wingertscup this year.
It's a 14.3km run, with an advertised 274m of climbing, meaning it is hella hilly in my book!

Framersheim is 26km away from where I live, so I decided to cycle to and from the race. Katja kindly joined me as support, but had to take the bus there.

When I arrived I was bit bit taken aback. The first few km were supposed to be flat to slightly uphill, but I could see that from metre 1 it started climbing at about 2-3%. I quickly started to reassess my goal and decided that 1h would actually be a good achievement!

When the race was about to start, I realised that we started in the other direction, so in fact it was flat then slightly uphill, phew! I ran with about 7 people in front of me, but the leader was well ahead after not very long. I felt like it was going to be a hard day. After about 4km, it was going ok, but I knew the steep stuff was yet to come. I had passed a couple of people by the time we hit the hill, but although it wasn't easy, it wasn't too bad really. It was maybe 4% for 2km, then flattened out before descending, also not so steep to start with, then finally getting steeper near the end.

The route wasn't the smoothest in the world, with lots of gravel and dirt tracks, but that didn't seem to cost too much time, and no ankles were turned, not by me anyway! After the first loop, which didn't go right back to the start, rather about half way down the hill before re-climbing it, I was feeling in the zone. Knowing that the last 4km were pretty much downhill meant I was looking at the 8km marker thinking I was nearly finished! A guy had been less than 50m behind me on the decent of the first loop, but seemed to burn out on the 2nd climb. I went up it at my pace, then knew I could just roll down the hill to the end. There was one small shock, which was the steepest section of the day with about 1km to go, but it was only 100m at most. Then straight back to descending. 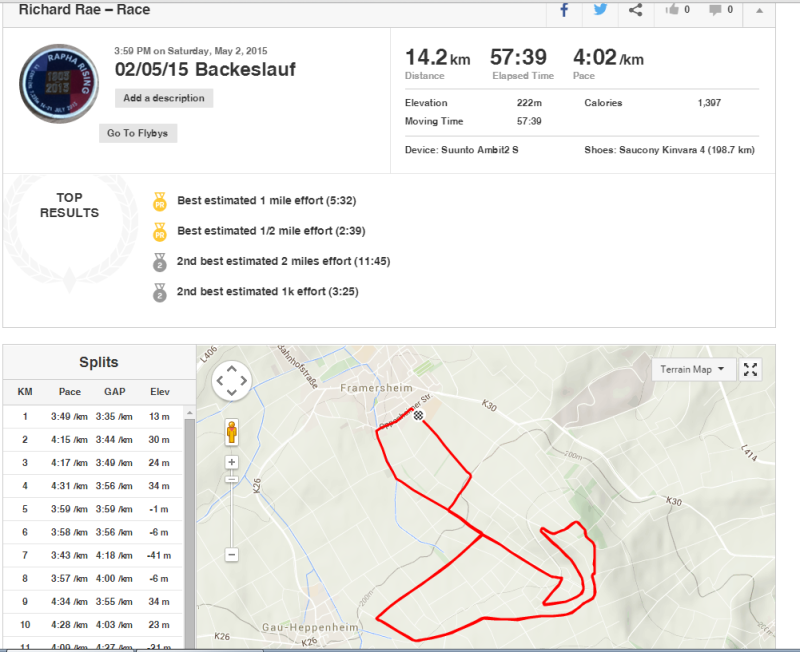 I thought I had counted 5 ahead of me, but as there was also a 1 loop race at the same time, I couldn't be too sure. Katja thought I was either 3rd or 4th. I waited an age to find out the results, but eventually found that I was 4th, so didn't win any bread and wine 🙁

I really enjoyed the race, a long downhill to end the race meant that I felt ok as I crossed the line, even if my heart rate was 184! My average HR was 176, which is a hard day at the office for me, so I think I paced it pretty well.

I happened to run into a colleague of mine Ronald just before the start who was running too, he also beat his goal time, so it was a successful day all-round!