With no midweek update this week, it'll be a bit more about the workouts this week.
Monday was a rest day, it was partially planned as this week was an easy week, but work went late and my MTB was at the train station, so I didn't get home until 7pm, so I just took a rest day.
Tuesday I did a 15.6km run outdoors. It was a base run, with my HR somewhere in the 130s and the pace at 5:20 per KM. It was nice though.
Wednesday I did some upper body work in the gym, followed by a boring 1h on the bikes in the gym. They are obviously better than nothing, but I can't say I look forward to them. I might start to do some midweek rides outside in the dark. I have bright lights, it should be ok.
Thursday was my one intervals session of the week. 7x1km on the treadmill (1% incline) at 15.6km with 250m rest at 8km/h. I was a little apprehensive as it was the 0.6km/h faster than normal, but it was pretty easy to be honest. The last one was a little more difficult, but there was always some left in the tank.

Friday I had Swim training session 3 with Max at Nieder-Olm swimming pool. Me and Jochen decided to get some private swim coaching as we are both a bit rubbish. We had the first 2 sessions in December, but due to illnesses and holidays we haven't managed to get the last 3 arranged until now. Max is still ill so sat on the edge of the pool to watch our techniques. Apparently my technique is quite good, I turn my head too much to breathe and my kick gets a bit wonky, but otherwise it's not bad. We had quite a lot of fast intervals in this session, the hardest part being 5x50m races between me and Jochen. I managed to win them all, but they were close for the first 25-35m then I moved clear. I think the gym upper body work might be helping out there. Anyway, it was a hard session but it gives me hope of doing a decent swim split in a half later this year, and surviving the full distance swim!

Yesterday was snowy, cold and windy, but it was long run day, so I did a long run. Running against the wind was horrible as the snow went in my eyes about every 0.3 seconds, but after the first few km it was almost always a cross wind or tail wind. I tried out a new route to Klein Wintersheim – Nieder-Olm – Zornheim – Ebersheim – Home. It was going to be too short, so I went for a loop in the industrial park in Hechtsheim to get it over 30km. It ended up being 31.4km at 4:57/km. A decent pace but my HR was only high 140s average. I was still feeling pretty tired at the end though.
Today was still cold, but dry and not too much wind, so I decided against dying of boredom in the gym doing a 2h session, and went out for a ride. It was surprisingly good! Only 63km in 2:20, but its a start. I felt like I could keep pushing a little even at the end. 250km is still a long ways away, but I have time on my side. 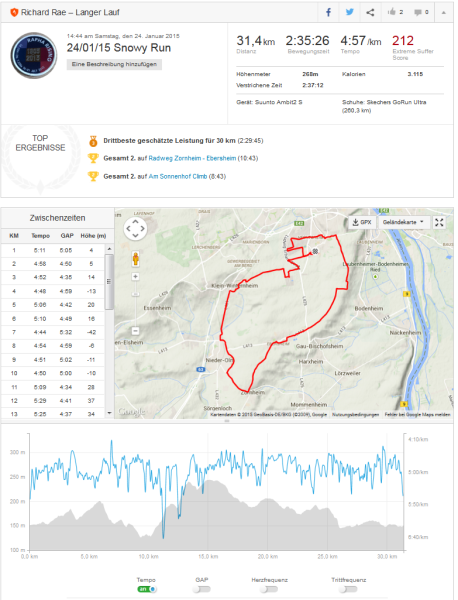 I am not surprised that my weight is up, it was a good week for my diet, it's just that last weeks weight seemed like a low blip. This weeks weight still puts me down 0.8kg in the last 2 week, so I am still pretty happy with how it's going.

I think I did too much quality in week 3, so I plan to run 1 interval session this week, instead of 2. I should get 2 swims in, especially with coached training being some time during the week. I need to keep plugging away with cycling, I expect my form will come at about the time as the weather improves, then it’ll be all good.
Regarding my weight, I was 79kg yesterday, but somehow 77.9kg today. I think I might be a bit dehydrated, so maybe my weight will go up in the next week, but hopefully not 😉

I have just noticed that this coming week is week 4, I will generally try to do 3 weeks harder followed by one week easy, so that is another reason to only do 1 set of intervals this week, and to cycle more! I need to get to bed nice and early from the get go this week, last week Monday-Wednesday were pretty much write offs because I was so tired.