I have been ill this week, my lungs haven't been happy and I have been getting muscle ache from normal work outs, on Thursday as I gave up on my intervals after 3 of the planned 7km repeats, I was not confident.

On race morning I was feeling much better and my PB seemed on again. My PB is 1:27:35 but my recent 10k races suggest that should be destroyed! I woke up at 6:15am ate my omelette and porridge and left the house at 7:20. Pre-race 'preparations' went well and I got to the start line a few mins early.  There was a 1:24 pace group which looked interesting to me, but after 2km in 7:50 I was still behind the 1:29 pace group!

I soon passed them and settled into a 3:55/km tempo which was fast for me, but felt comfortable and my HR was in a good zone.  After what I thought was 5km I checked the GPS and saw 7km were done, another good sign.  The ks ticked away and soon I was at 15km in 59:30, flying.  The one incline of the day followed, I had been just behind the 1:24 group almost all the way, but after the hill I decided to push on ahead of them. The overpass next to Commerzbank Arena was the last tough bit and the long run round the stadium was quickly done. 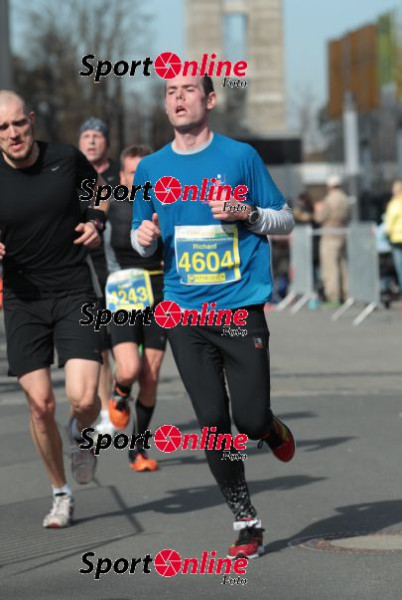 The last 50m are in the stadium I gave a little sprint and stopped my watch – 1:23:40 about a 4 minute PB and 6 minutes better than last year!

All in all, it went well. My average HR of 169 is lower than normal, and I think that fully fit I might have had a few more seconds off my time, but I'm not complaining! This run sets me up nicely for a sub3 attempt in Bonn in 6 weeks time, that would be awesome!

It is also my second goal of the season reached, I think the 5k time goal is a sitting duck now!

Week review to come, but this was easily the highlight!

The week that wasn't. So the good part was that on Monday I ran my intervals, 7x1km but the last one was actually 1.5km at 16km/h, I didn't feel great before doing them, but they went well. I did a bit of strength work beforehand, which was also a good bonus..

On Tuesday I swam in the evening. I hadn't planned anything specific but managed 2.5km with some fast hundreds in the middle. I mountain biked there and back for 23km extra.

Wednesday was the best day of the week, I got up and ran an easy 11.5km before work and cycled 1:15 on the road bike in the evening. My legs felt good, maybe not super fast, but they kept ploughing on up Col der Wahlheimer hof, the best local climb.

Thursday was to be long run day. I ran 10km easy, then 10 at race pace, and 12-15 out would have been ideal. My stomach was not playing ball, so there were some 'pauses' but after my 5th stop after 22km and a really bad stomach ache, I called it a day at 25km. The marathon pace parts were hard but manageable, I ended up doing 4:13/km on a hilly loop.

On Friday I worked late and had to fly to London in the evening, so had a planned rest day.  I noticed whilst travelling that I started feeling under the weather, on Saturday when I woke after 4h sleep, I felt like I had a cold, with a sore throat, running nose, sneezing and headache, bugger.
Exhausted and with a cold, Saturday became an unplanned rest day 🙁

Now my chest is almost always bad when I visit home, due to all the animal hair. That, on top of a cold, left me feeling like death. I still went out for a possibly unadvised 10k easy run, which ended up at 5:06/km which was faster than expected on a bumpy route.  And that was it. A poor few days of training, but I just hope everything clears up in time for Frankfurt half on the 8th.  I head home on wednesday and if I'm healthy again I'll pile in some training on Wednesday, Thursday and Friday, before the first big test of the year, Frankfurt half Marathon on Sunday

I wish I could say that this week will be a return to unbroken training, but I need to go back to England for my Nana’s funeral. I fly on Friday evening and come back a week on Wednesday.

I will try to front load the week to get everything in. Tomorrow run before work, Swim in the evening. Tuesday 7x1km, maybe outdoors, it’d be good to do them with others. Wednesday, run before work and cycle after work. Thursday I need to get my long run done, I put 35km for Jantastic, so I will do 35km! I will see on Friday how everything goes, I have lots of work to do, but might be able to get out for a rare lunch break run.

Saturday: if I manage anything I’ll be happy, a swim on Saturday or Sunday should be doable, with a run on the other day.

It won’t be impressive but I am ticking over. My running volume isn’t high enough, but the key workouts are all there. Frankfurt half is fast approaching and I’ll be amazed if I don’t PB, I expect sub 1:24 really.

I will try to get in a midweek update as most of my stuff will be in the first half of the week.

Have a good one!!