Yesterday was a bank holiday here in Germany, so I could finally go for a bit of a longer ride with the power meter on.  I have stopped putting it between the bars at the moment, so I am just wearing my Suunto Ambit 2 as a watch and recording my data, and occasionally checking what I am doing, rather than fixating on it all the time!

So I have been informed that my last FTP test was probably unrealistically high (325w FTP).  Lots of suggestions were made, and one that was worth testing was if the head unit being used affected the results. I did a ride with my Garmin 705 in my back pocket whilst wearing my Suunto Ambit 2.  I rode normally for a couple of hours or so, and uploaded both of the rides.  The result was that they were essentially exactly the same, with the Garmin showing 1w less. I saw that on one occasion the Garmin had lost the signal from the 4iiii Precision, whereas the Suunto hadn’t so that even explained that small difference.  My watts were just as high as before.

Next test.  I was told that I need to calibrate the 4iiii with the Garmin, rather than the Precision.  I did that and again went out for a shortish ride and when i got back the watts looked a little lower.  This time I had my Garmin in my back pocket on the drive side, and the power graph was full of drop outs, so that was something to take note of.  The power on the Suunto also seemed lower, though it wasn’t a huge difference, but I think there was a difference.  When I got home I thought I would check the numbers that are shown when I do the calibration on both the Suunto and the Garmin to compare. 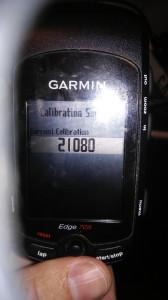 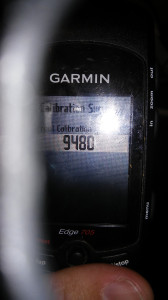 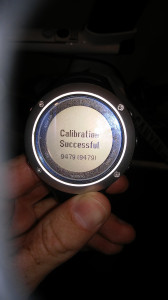 The Garmin calibrated the 2 sensors, whereas the Suunto only calibrated one.  I checked the post from 4iiii that they made on facebook a few weeks ago:
“When you successfully zero PRECISION, you should see two numbers alternating on the screen of your head unit or bike computer. Normal ranges for these numbers are between 8000 – 11000 and 18000 to 21 000.”

I see that a) my 21080 number is a bit high and that b) my Suunto isn’t fully calibrating the Precision.

I will write to 4iiii about the high reading, and Suunto about the not calibrating issue, but until then I will use my Garmin to calibrate the Precision and record with the Suunto (as I don’t have a holder for the Garmin in my Aero set-up at the moment.

So as I said, I went for a long ride yesterday, here is the strava data. 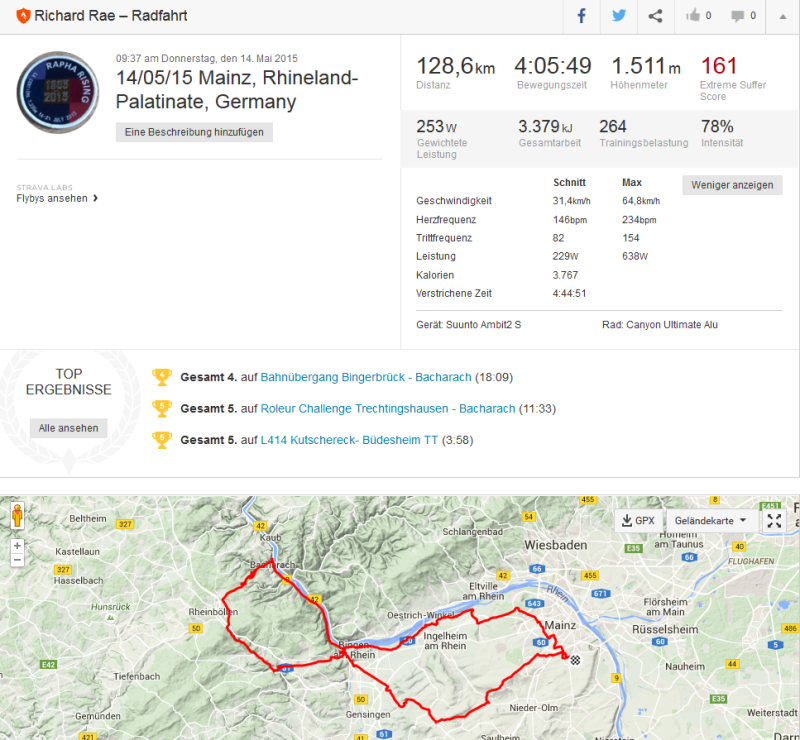 On the way to Bingen, then round to Bacharach, then back to Bingen we went quite fast.  On the way back from Bingen we went on the cycle path, which was a bit of a nightmare and hurt the average speed a lot, but it wasn’t a big issue.

In Bacharach there is a big hill.  It isn’t steep but it is quite long at 8.7km from bottom to top.  I didn’t give 100% all the way up, but I did do a pretty good effort.  I noticed afterwards that it took over 20 minutes to do, so I cut down the segment on Strava to the best 20 minute segment which gave me this: 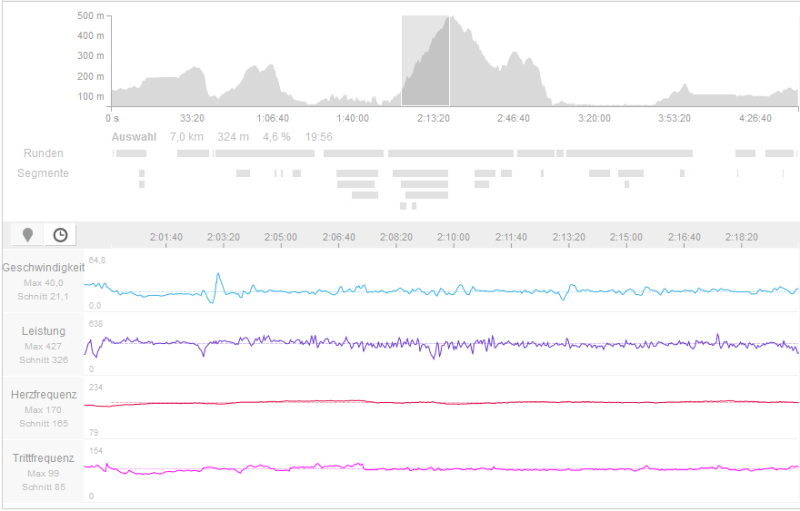 So an uninterrupted hard effort of 20 mins (ok 19:56!) with working HR data too!  Now this was after 2h of riding already, but the average power was 326w.  95% of that is 309.7w, so I think I can safely say that my FTP is more than 310w using this powermeter, when it is calibrated with my Garmin!  I know that my HR goes a bit higher than 165 for an average for 20 mins, so I expect that I could do a bit more, but not loads more. In the few mins where my HR was 170 or so, my average wattage was 350, so I am not 100% sure that the calibration with the Garmin would change my FTP read-out, but I will be conservative and use 310w for the time being.

I had not real issues with the power meter, it has been working well except for the problems with the head-units.  My bike developed a creak which i thought could be due to the cranks not being well enough oiled, but it thankfully stopped yesterday somewhere near the climb and didn’t come back!  I will write to 4iiii about the numbers now and see what they have to say.  Then I will report back here!

I will be doing another long ride tomorrow, I need/want to do another 210km this week, so 1 long ride and 2 short rides should do it pretty easily.