AM: I woke up early and could feel yesterday in my legs. I jogged an easy 5km into work but my legs still felt pretty crappy. I right glutes still hurts. If and when I sit on my massage ball in the right spot, it is agony!

PM: Still feeling flat, I ran 6.5km home and was done for the day. The homemade popcorn from last night wasn’t agreeing with me and my legs were tired.

I think I am a bit ill. I have been very hungry recently, which is ok, but I now have a bit of a head ache and a sore throat. Ain’t nobody got no time for dat!  I planned on doing an easy single run, but ended up sleeping instead, so today was a rest day.

I woke up feeling pretty under the weather, even though I slept for 9h again. I decided quite early on that it would be another rest day for me. I don’t think I’ll be ill for long, so I am not too worried.

I was feeling a bit better, though my guts were still fairly bad. I ran an easy 12.2km loop, it was nice weather, except for against the wind!  There is a cold front at the moment and it is below freezing all the time. Running into the easterly wind is painful, but fortunately doesn’t last too long!

I was up early and ran another easy 12.2km. It was very similar to yesterday, though it was the squatch loop this time. In the sun and with the wind on my back, it felt warm, against the wind it was bitter cold!

I went swimming later for the first time in a while. I felt quite good surprisingly. I did my tautness kicking and alignment stuff, followed by some fast 50s and a little cool down. As I only had 45 minutes, it was a good short workout before the TCEC JHV.

I ran the TCE 10km in Langen. See the race report here.

Well it wasn’t a good week was it!  I ran just about 56km with no workout, but I did have the 10k race. I am a bit disappointed with my time, but the ice wind must have cost a few seconds.

I’m feeling good now anyway, I have 4 big weeks of training left, then a taper. It is finally getting to the endspurt!  Next week I want to run 125km with a quality long run and a longer midweek run with some M pace work in there. The weather won’t be helpful, so I will have to do my man suit up tight!  I also want to cut back on my eating, I ate a lot in the last 9 days, that needs to stop so I can drop 1-2kg before Paris.

I have no photo for the snippet – so here is me in my new cycle kit that arrived this week – 31€ for bibshorts, top and a bidon! 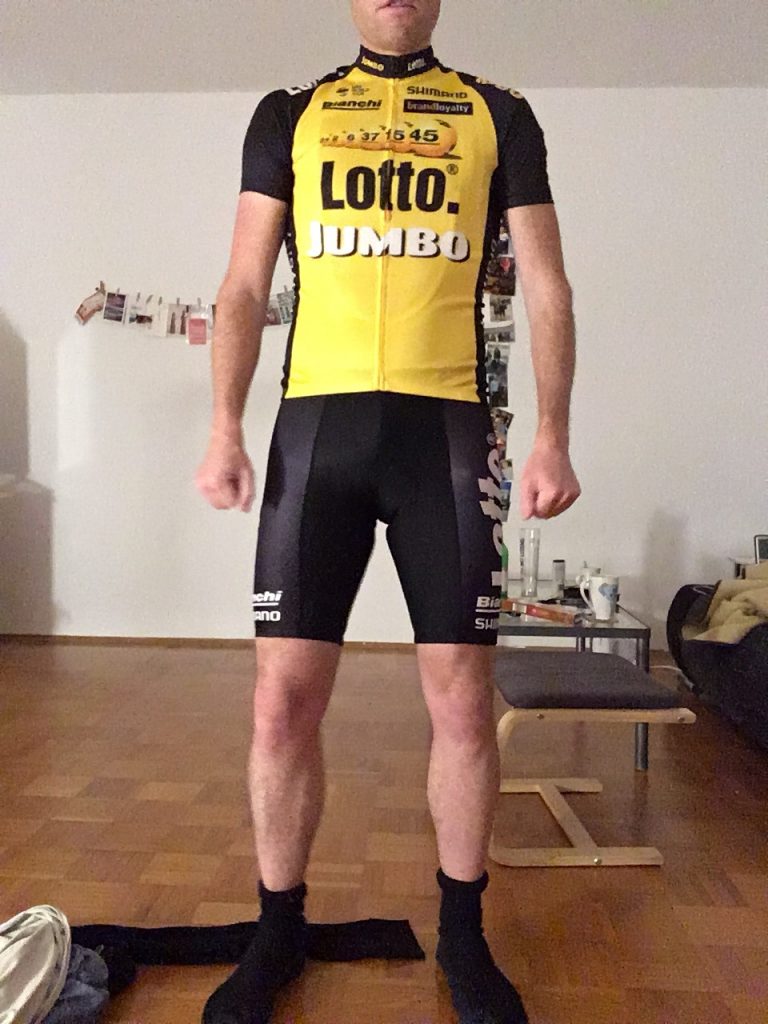