The last league race of the season is usually in Remagen. Last season they cancelled it, but it was back on this year. We could swim even though the Rhein is really shallow at the moment.  TCEC decided to meet at 6:30am on Sunday, which meant that I was up at 5:15 (before my alarm) and out of the house and cycling in the dark by 6:05.

I had ridden my new road bike on Saturday and was pretty fast for little effort. Later in the day though I had some pretty dreadful diahorrea. No worries though, it should sort itself out.  On race morning I had slpet really badly then ate my bog standard breakfast of cornflakes and an omelette. I really didn’t feel great and couldn’t stomach the whole omelette, so I threw it away.

After losing a few more fluids, I was on my way to Mombach. We set off and were there in good time. I messed up a few things, such as forgetting a new pair of shorts for after the race, forgetting my towel and not putting my wetsuit bag in T1, meaning I couldn’t store it away as you are supposed to.

Anyway, we got the bus to the swim start this year and then got on the ferry to the middle of the Rhein. I remembered that last time I swam near the coast and took ages, this time pretty much my only goal was to swim in the middle and pick up the stream of the river as much as is possible.  We started and I worked my way to the middle. I breathe to the right and could see the kayak on my right the whole time. I didn’t swim well, I felt pretty weak, but I got out of the water after about 22:40 which was minutes faster than last time, I even saw Basti in T1, meaning I had done well. 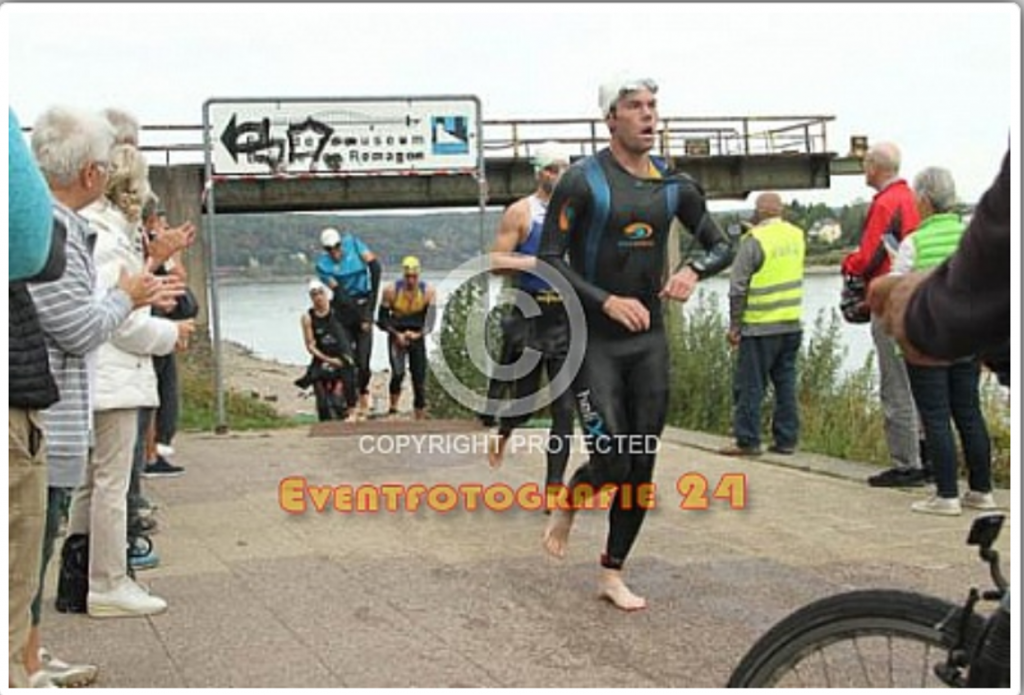 After putting on socks, and hiding my wetsuit out of the way, I got onto the bike. I wasn’t gaining on anyone and a quick look at my power showed about 230w, pathetic.  I really just couldn’t get going, it was a fight from the start and people passed me a lot, which isn’t usually what happens. Near the end of the first loop Robert passed me and was out of sight pretty quickly!

I couldn’t hold aero position for more than a few minutes as my shoulders were aching, after finally getting to the top of the climb for a 2nd time, I was happy to be able to roll back down to T2. My average speed was 32km/h, really bad.  Not only that though, I felt like death, I really didn’t know how I would run 10k after that ride.

But 10k is what I had to run, so after a decent T2 I set off. I saw Michael coming to lap me almost immediately, I worked out that he was about 13 minutes ahead of me. Running is usually my strength, but this time I had nothing. I was being overtaken all the time and was just hoping to make it to the end.

Slowly, and I mean slowly, I ticked off the loops. I was so happy to be finished, but so disappointed with my day. It was without doubt my worst triathlon ever.  I kind of finished in a daze, light headed and feeling weak.

The others were chatting so after I had a bit to drink, I went over to them. They looked at me and I felt like it was pure pity, I had to go to the side to have a few minutes by myself to get myself together, rather than cry in the group!

I felt like shit for at least the next 45 minutes, then after having a coffee and a shower I started to feel better.  The day after as I write, I still have diahorrea and feel weak, so it seems that I was ill going into the race.

So that is the end of my 2018 triathlon season. There was the Hachenberg team sprint where I struggled on the bike and ran badly, there was Mußbach where I cycled badly, then Worms were I cycled dreadfully. There was Neuwied where I was a drop out due to health stuff and now my worst triathlon ever in Remagen. It’s been a helluva season!

Over Winter and Spring I plan to keep traithlon training, rather than just running. Actually I’d rather cycle more and run less, whilst ticking over on the swimming. I just need toget myself right though, I guess they will be planning me for the 2nd team next year, I need to get myself back fit, healthy and on form to get some points for the 1st team.

I’m not going to whinge on too much about how I’m not fit and have low iron etc, so this will be an attempt at a more positive race review!

The annual Firmenlauf is early in September, last year I ran 17:08, 1 second slower than 2 years ago I believe. This year I had 18:25 in my head as a reasonable time for me, that would be about par.

We met up for the team photo as is customary, but we didn’t have any fans to look after our bags this time. We all trotted off to Thomas’s car to put them in there, but he had parked miles away! By the time we got there, it was 15 minutes before the race start, so I jogged back to the start area to go to the toilet and try to get a decent start place.

Last year I waled into the starting pen from the front and could run freely from the start. This year they wouldn’t allow that so I was stuck trying to find a way to the front. I saw a few TCEClers who invited me to jump the fence and start with them, but the steward wasn’t having it. I walked a bit further back and saw a gap, so asked the person next to the gap if I could jump over there – it was Karin from TCEC too – a weird coincidence.

So I started and got stuck in a fair amount of traffic this year, but after the first 400m it wasn’t too bad. There were some pretty aggressive girls from the Uni who were happy to push people out of their way, so I ran behind them for a while 🙂

I felt alright really, after 3km I had 11mins on the clock, so 3:40/km. I could see Jochen ahead of me (Schott were taking part for the first time), and I very slowly pulled him in. When I caught him I gave him a shout and he answered something strange about recognising my footsteps… He seemed to speed up for a while, but I soon passed him.  Near the 4km marker I passed the first woman, it was pretty obvious as all I could hear was from people on the course was – oh here comes the 1st woman – all the time!

So after the last few turns I knew I was almost done and without much of a sprint, I crossed the line in 18:05, about a minute slower than last year, but 20 seconds faster than I had predicted.

So that was that for another year. I was still very comfortably the fastest in TRON and Biontech, especially as their fast girl didn’t run this year.  Next year sub17 – hopefully. 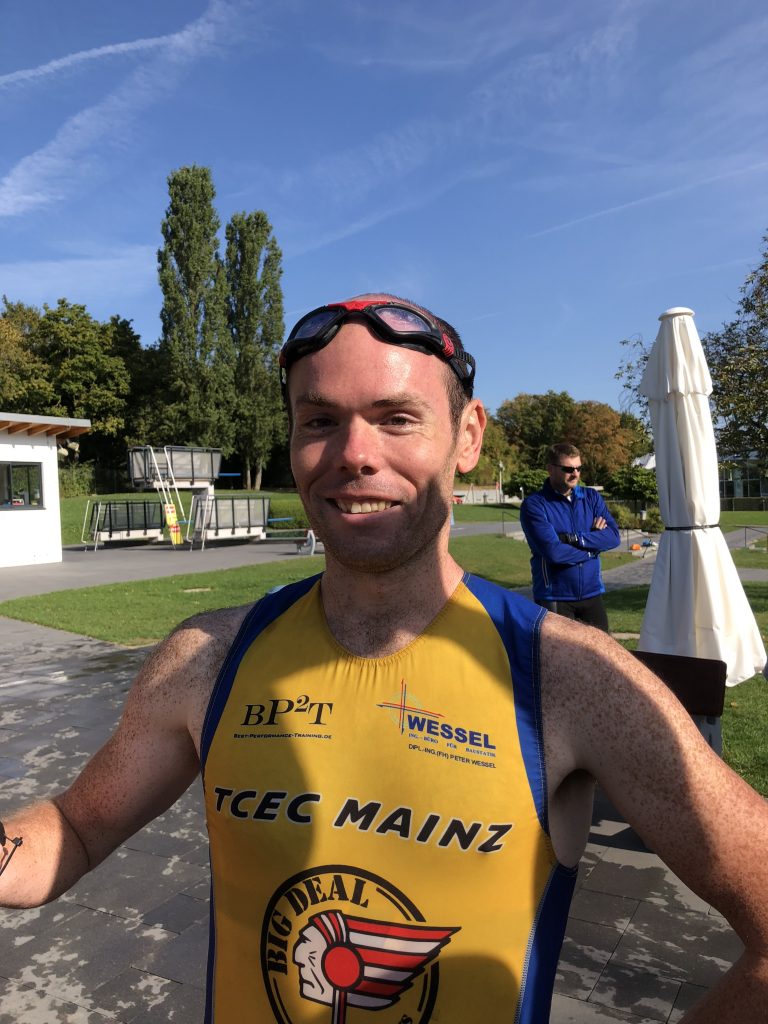 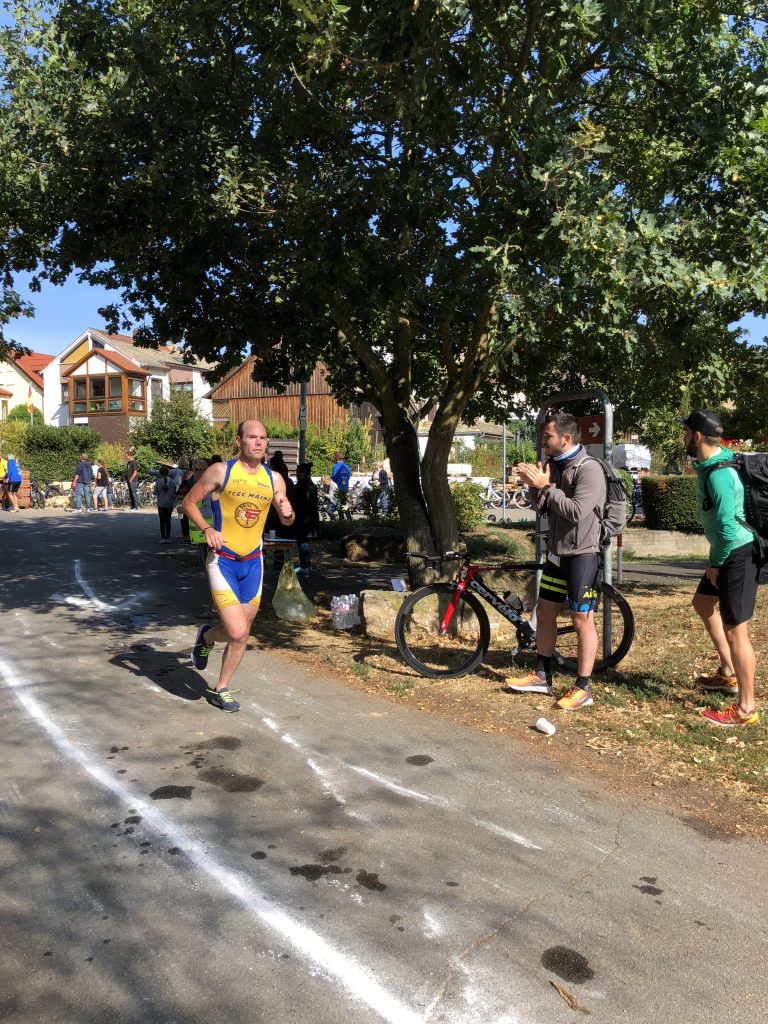 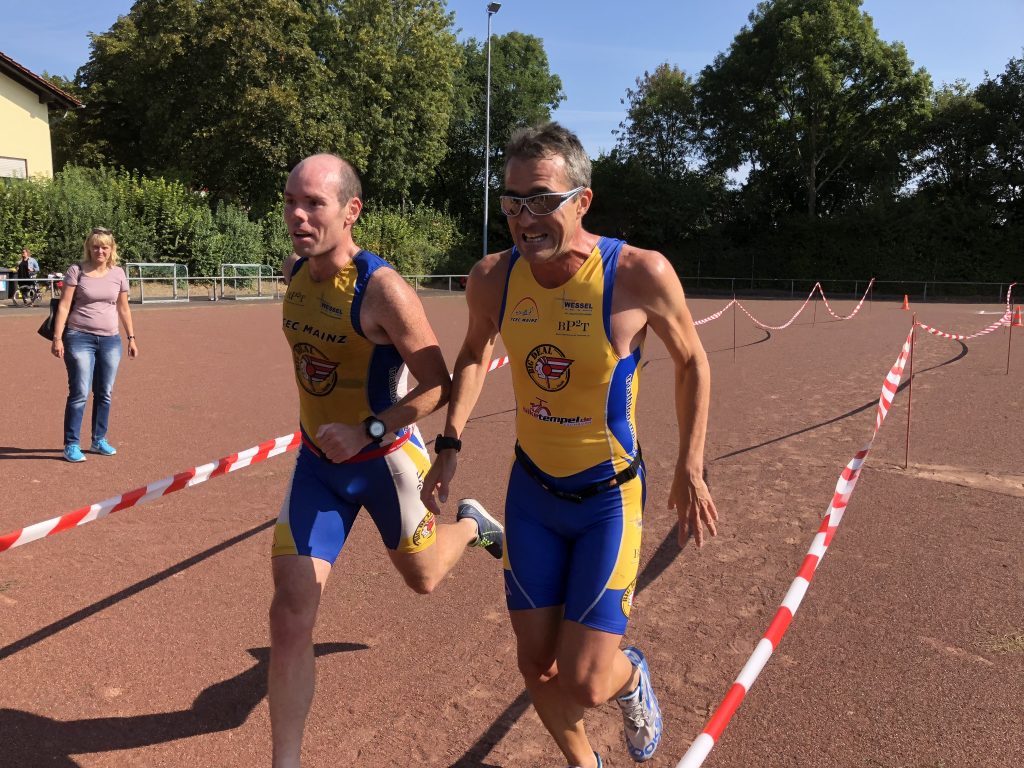