One week after the first league race of the season, came the second league race of the reason! This time it was an individual triathlon, so it would be balls to the wall from start to finish, though it was last week for me anyway!

I decided to travel to Neustadt on Saturday so that I could see the course and sleep a bit later on Sunday, we would have to be there by 7am.  Neustadt isn’t a very interesting town and I also couldn’t sleep very well due to a hot hotel room without air conditioning.  At least seeing the course worked out well.  It is quite hilly, with 1 big climb from km4-7, then a steep short downhill followed by a 160° turn. A few km later in the valley, the road is badly broken up and shaky as hell, then we would be back onto open roads to battle to the end of the route through traffic.

So I was awake at 5:30am after a few fire engines went past, luckily they had their sirens on full, otherwise drivers on the empty roads wouldn’t know to move out of the way… I ate and checked out of my hotel and picked up our 17 starter bags for the 1st, 2nd, masters and women’s teams.  Soon enough everyone else arrived and we chatted about how the bike would go. 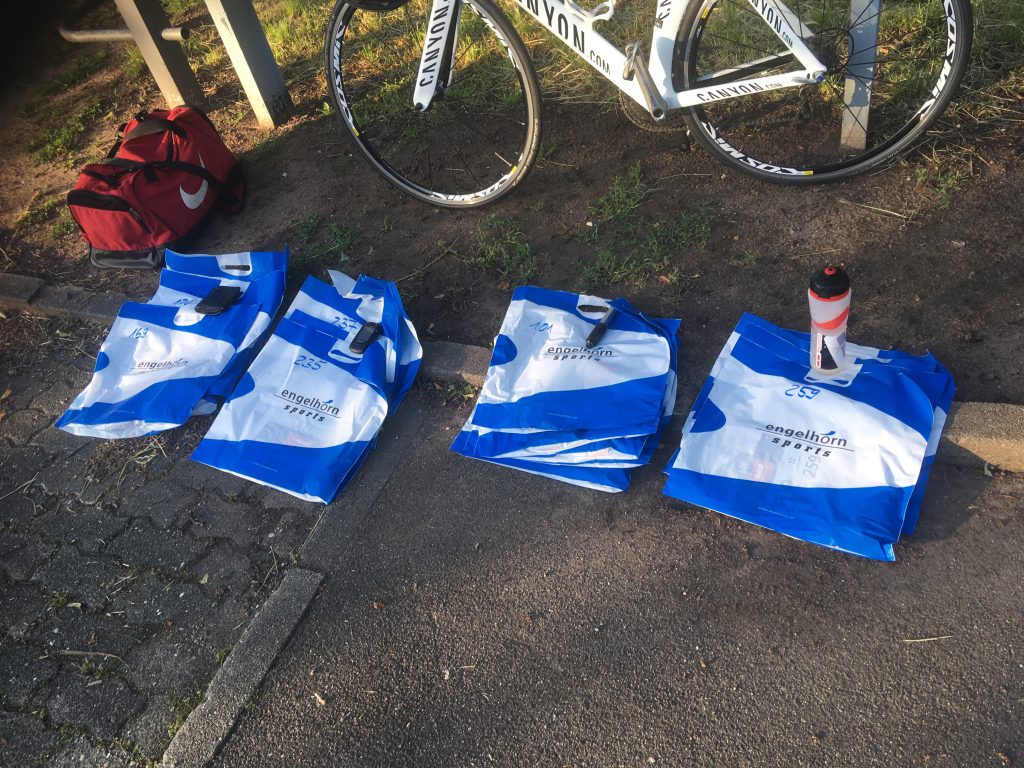 Swim training not paying off!

It was a 500m pool swim with 7 starters per lane. The masters and women started about an hour before us, then the 2nd team started 20 minutes before us and finally it was our turn at 9:35am.  I have been swimming lots recently so had hoped to stay on Christoph’s feet, but I didn’t manage it.  I was soon in 7th and last place in the lane, but could swim with 6th place.  I overtook him after about 300m and got out of the water after 8:20, so basically exactly the pace I would expect if I wasn’t doing a swim block…

I ran to my bike and saw that everyone else was gone, I knew that already though. They were pretty much all together after the swim, about 50m ahead of me (45s). I got on the bike and set off, I passed more often than I was passed and on the big climb could see a TCEC rider ahead of me. I knew it wouldn’t be Basti or Michael and probably not Christoph, so would have to be Peter. It was Peter and I caught him right at the top of the climb and moved ahead.

The valley wasn’t so bad at speed, the bad road surface also felt better than it had the day before.  The traffic was very annoying though, cars were trundling along and blocking the road, then stopping at roundabouts just in front of me, it was annoying.

Anyway I got into T2 and was told to park my bike the other way around. I had parked as I always do, with the aerobars pointing in, but I had to swap it around costing me a few seconds. Peter arrived in T2 and was next to me, he isn’t a bad runner so I was slightly worried that he’d catch me.

The course goes straight uphill after 400m then rolls until the turn around, then it is largely downhill on the way back. I saw that Basti was 1km ahead of me, then Michael behind him, and Christoph was also well clear of me, I wouldn’t be catching him today. I could also see that Peter was falling behind, so I would at least not be our Streichergebnis (the person who doesn’t count in the results).

The downhill was fun, especially the steep last part. I bounded down at full speed, even though it was hurting my feet. I passed one last person, but couldn’t get the guy just ahead of me in the stadium.

I finished, it was a better effort than last week from me, but to be so far behind Christoph and Michael having been with them last season is obviously not ideal.  I saw in the results that I lost almost all of my time on the bike, that was slightly surprising to me, but I guess shows that I need to ride my TT bike much more from now on.

Overall it was a decent day for TCEC. Basti was 4th in the league and Michael 12th. I think we were 3rd in the team results, so better than last week. It’s not going to be easy this year, lots of teams are starting with better athletes, for example Boris Stein who is a top Ironman pro started in our league. That’s just crazy, he was 10 minutes faster than me!

So now there is 3 weeks until Worms. I hope my swimming training pays off by then and my TT bike riding should be better too. If I’m not going to be the Streichergebnis, I will have to beat most probably one of Jonas or Christoph. That isn’t looking like being an easy task at the moment!

With no races planned until then, that will probably be my next post, I’ll try to get some better photos next time!  See you then!