I had heard that this is a fast road 10k race from a few people, so I actually moved around my plans to fit it in! After being ill midweek and failing my intervals badly on Wednesday, my confidence wasn’t sky high, but who knows what will happen and I had signed up, so I was running for the first time in Langen.

I managed to get a lift to the start with Sebi and Lukas, we set off at 8:30 for a 10am start, except that the race started at 11am!  So we had a long while to linger before the start, but as it was part of the triathlon convention, it wasn’t too bad.

Lukas ummd and ahhhd about signing up for the race. It was freezing cold, windy and cost 20€ if you sign up on the day. He eventually decided that he would run, he is fast so would have a chance to win.

Blowing in the wind

The race started with the wind and thus the start was fast. I felt pretty good and settled into a decent pace. After the first turn around, we started running into the wind. I tried to tuck in for a while but I felt like I was in the wind more than I wanted to be. After maybe 4km a few people including Sebi passed me, I should have tried to stay with them but I didn’t. 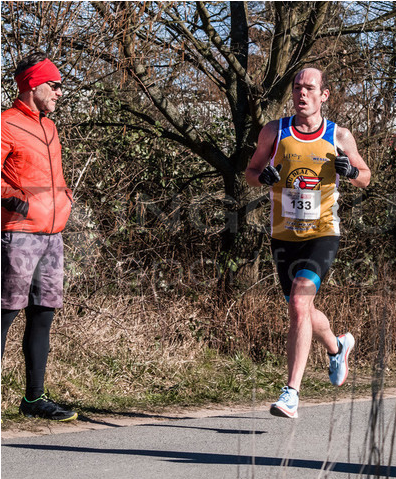 Head down and grind it out

I didn’t feel great and I had no idea what my pace was, but after 6km I saw 21mins on the clock, that is 35minute pace!  Ok I had more to do against the wind, but I was shocked (Strava disagrees with either the km marker or the time, I wasn’t on 35min pace!)  The 7.5-9km part was the worst, but Sebi wasn’t far ahead of me and I was still going ok. I thought that a PB could be on if I held it together.  The last switchback was with 700m to go, then it was a few 100m with the wind, then a sprint to the line.

I crossed the line in 35:51, 7 seconds slower than 2 weeks ago in Groß Gerau.  I felt disappointed as  wanted a sub 35:30 time, but it also wasn’t a nightmare.  Sebi ran a massive PB 10 seconds ahead of me and Lukas won the race in 33:16, I guess coming last from us 3 probably made it feel like a worse result than it was.

Just to make things worse, I was 4th in my age group, so went home empty handed, not that that is too important, it is always nice to win something!

So that was that. My 10k season is probably over now. I have a half marathon in 2 weeks, until then I need to get some good mileage in and stop eating so much!  I can still dream of a 1:17 half marathon, even if a 1:19 seems more likely at the moment.