I have been a bit worried about Liege Bastogne Liege. 272km is a very long way to ride in a day.  The weather forecast started off decent, but got gradually worse and worse until rain, wind and cold was forecast for the first 6h, perfect!

We signed in on Friday, it was a low key affair, much smaller than the Maratona last year.  Then we hung around a bit until Dimi arrived and we were ready for the ride.

At 5am the alarm clocks went off, the apartment was cold enough, I was pretty worried. I wore everything I had and we set off at 6am to the start.  Now I say the start, I mean the start area. Although it says that we can start between 6:30 and 7:30, there was no official start, or even start line!  We cycled the first 800m, then asked around, then went back to the start where we learned that there is no start, so we set off.

Apparently Dimi had told Jochen that he would call Steffi and we should wait for him, Jochen started cycling, so I followed.  We didn’t see Dimi again until he finished!

The first few km are in Liege, it wasn’t beautiful, but it was ok.  The first 100km are all in a southerly direction towards Bastogne.  I was actually a bit warm on this section.  Groups formed and were broken apart, but usually there were people to ride with.

The first food stop was at 43km. There were toilets, sports drinks and lots of cold sweet stuff, like fruit, cereal bars and waffles.  I rammed a few waffles down my neck and set off on the next leg.  The turn off to the 155km ride was soon after the 1st food stop, but almost no one turned off.

After 75km was the first climb of the day. It was actually about the 10th climb of the day, but for some reason this one counted as a climb. It was nothing special and soon done with. We were soon in Bastogne and feeling quite good.  I had drunk enough and was eating enough too.  The weather wasn’t great, it had started to rain, but it wasn’t too bad.

Straight after the 2nd stop there was traffic waiting at a roundabout. Jochen rode right, someone else rode left, I waited for the traffic which I thought was moving. It didn’t move so I stopped, except I didn’t fully click out of my pedal, so fell to the ground in slow motion… TIMBER! It was a bit embarrassing, but no real harm was done.

The next section was mainly in a group, but it was getting cold and shortly before the 3rd food stop, I was leading a small group whilst feeling weak and slow.  The short stop didn’t help, I was starting to freeze.  It was now pouring down and my gloves and shoes were drenched.  We set off on the next part but I was shivering violently.  I let Jochen and a group go and would have quit on the spot there if I could have, but there isn’t really any other way back to Liege!

I decided that I had to ride a bit harder to warm up, so I picked up the pace on the hills a little.  It worked and I stopped shivering, but I had lost all dexterity and couldn’t drink or eat until the next stop.  At this low point of the day came our best bit of luck.  The groups of riders up until then had all be poorly organised and thus short lived.  We somehow ended up in a 30+ man group that was led by a cycling club – CQRF cycling.  It was great, they rode tempo and everyone filed in behind them.  The next 40km or so were the best of the race, it wasn’t always easy, but a good long ride pace and effort.

Some of the climbs started to get a bit tasty after Bastogne, I think the 2nd climb averaged over 10% with parts at 20%.  Others were a bit longer but not as steep. At the 4th stop I had decided to wait for the group, more specifically the CQRF riders, but they stopped before the food stop, so the group broke up.

It had now stopped raining and was a little warmer, I remember after 2 climbs in a row that I was actually feeling warm for the first time in hours. After 200km I was feeling fine and felt like we were counting down to the finish for the first time.  The Redoute is the only climb that I have heard of before on the course, so when we got there I expected a lot.  There were caravans at the side of the road with fans already getting the best spots to watch the pro race the day after.  The climb itself wasn’t too bad. It had steep parts and was quite long, but not many were getting off to push, and by now the 3 routes were all together, so some of the riders were ‘less accomplished’. 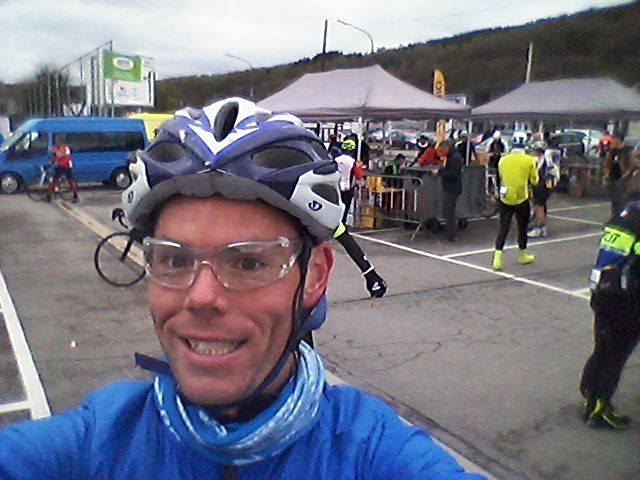 The last food stop was with 39km to go. I had lost Jochen somewhere on a longer climb, so I stopped, ate and headed off alone.  I didn’t find a good group to ride with, but Jochen apparently did and caught me on a downhill a while later.  It felt like we went from 39km to 30km to go in about 5 minutes, I was now very confident of getting to the end in one piece.

The last 30km are the worst part of the course, not that hardest, just a dreadful parcour.  You ride around the outskirts of Liege in traffic, stop at lots of traffic lights, there is a section on a duel carriageway and then the cobbles start.  I knew that the pro finish line was coming up soon, but thought it was in about 3km. The street looked familiar though, it is a long straight boring 5-8% gradient street, and I though I knew it from TV.  It was the pro finish and when we got to the top there were signs saying ‘you made it!’ and other rubbish.

I say rubbish because we hadn’t made it, we had 8km more of traffic and the side streets of Liege to get through.  My personal highlight was the final downhill of the day, which was quite long and fun, until the cobbles started. Downhill cobbles aren’t fun. They went on for maybe 1km or so, then there was just a bit more traffic and a few traffic lights before we made it to the end.

The finish line was actually a line, but without any chip timing obviously.  I finished with a total time of 10:35, or 10:14 if you don’t count the food stops (but do count the traffic stops)

In the finish area there wasn’t much going on, except beer to drink and sausages to eat. We waited inside for Dimi, who came 1h later.  We were all tired but happy with our efforts.

So, in conclusion, Liege Bastogne Liege is a tough day in the saddle. As a unique challenge I can recommend it, as a course it is dull and as an event it is poorly organised. The weather was crappy too. Liege isn’t a great town to stay in either.  The climbs are tough, but nothing special. Lets put it this way, I won’t be going back!  I am happy to have done it though, now when I watch the race I will recognise the course and relate to how hard it is much better. 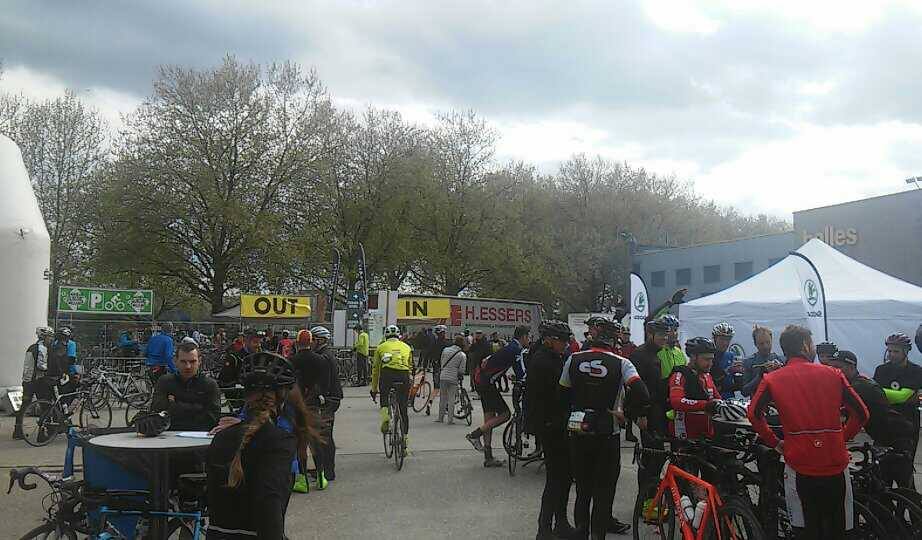