This week has kind of felt like a bridging week. Last week was a good one and next week is a training block, so I have been keen not to injure myself or overload myself in advance.  That said I wanted to ride 300km+ and do my biggest week of swimming ever, I think last week holds the record, so anything more than 7.2km would do it.

On Monday I did a little cycling loop, just 36km. It was incredibly windy and I decided to target a Strava segment near me.  I looked at what my best 5m power was – 376w, and went off at about that power for the 5 min climb.  Even up a 4-7% gradient it felt easy with the wind on my back, I really flew up the climb.  I was amazed to see later that I had taken the steepest segment in the middle, but not the whole climb segment, someone was a bit faster still!  I knocked out a short brick after the cycle, just 5km but at a decent clip.

On Wednesday I got up before work to run, as I should have run on Tuesday evening but was too lazy.  As I was alone I thought I could push the pace a bit so ran my 11.7km loop at 4:30/km pace.  It didn't feel too hard, but I didn't wear my HR belt either, so I don't know my HR.  After work I cycled a 62km loop. It was a standard loop to Alsheim and back around.  I averaged 32km/h and 264w it was quite good, but nothing special.

Thursday was another swim day.  Again at TBB freibad.  This time the water temperature was only 20.5 degrees, which is a bit chilly for my liking.  The lifeguard at the pool decided to give me a coaching session, which I really appreciated.  Essentially he said that when I breathe I move my head too much.  He also said that I should pull straighter and that I possibly breathe too early.  I am trying to work on them but changing my breathing is hard! I did 2700m with longer pauses than normal to talk to the lifeguard. I had planned on doing 3km+, but it was still better to get tips.

On Friday I went for another 60km ride.  I had moved my bars down 2cm by slamming the stem, which doesn't sound like much, but it feels like a lot! 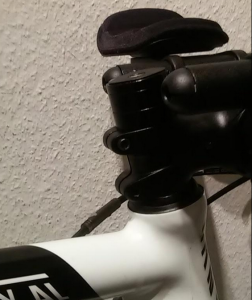 I did a Alzey and back loop, through Gau-Odersheim then back over Elsheim.  I was happy with my 33.4km/h average speed, and my power was down too as I wasn't really hammering it (248w NP). It was another good ride, I like the 2h rides, they are short enough that I don't need to plan much, but long enough to tick off a good few KM. 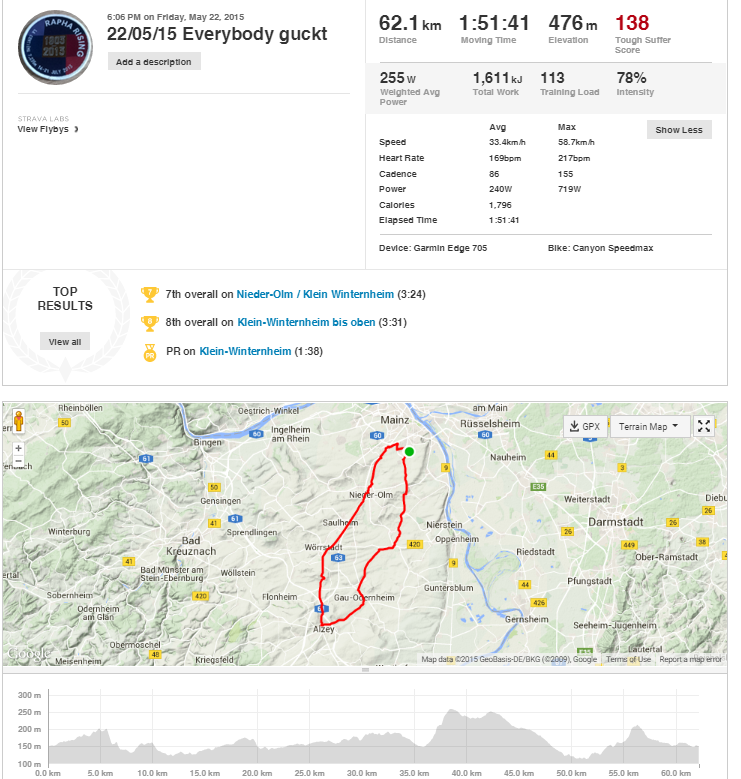 On Saturday I got up and ran quite early with Katja, just the normal 11.4km loop.  It was quite slow but fine.  After watching Stuttgart fluke staying in the Bundesliga I went for another shortish ride. It was very similar to Wednesday's ride, but in the other direction. It was fast again though at 33.6km/h. I was averaging 35km/h or so until I got to Laubenheim hill, it makes me think that in Wasserstadt I should be god for a fast time.

Finally, yesterday on Sunday I finished my 300km cycling for the week with a 75km ride in Hessen.  I remembered Hessen's flat roads with nice cycle lanes. I had apparently forgotten that they have traffic lights every 500m instead of roundabouts.  I must have caught every red light all day, I was getting really pissed off after a while!  I wanted to ride between 70 and 90km, so when I got back home with 75km on the clock, I was happy enough.  I still wanted to go swimming, so I cycled to Nieder-Olm pool.  The biggest mistake of the week, I decided to cycle through the fields not knowing the fly ladened hell I was about to go through.  I cycled head down, but could feel my head being peppered as I rode.  My arms and legs were quickly becoming covered in little black flecks, it was just dreadful.  after a few km it was over and I got to the pool.  The water temperature is always higher at Nieder-Olm, 25.5degrees yesterday.  I did my routine again and after 2500m decided another 500m couldn't hurt.  I got to 3000m but still felt really good. I decided to leave it at that for now, but it looks good for being able to go 3km+ in the near future.