I had this week off work and wanted to get some big training in.  To finish my 1800k in May challenge, I needed to ride 500km+, I had also thought 10km swimming and 60km of running would be nice too.

The week started off slowly on Monday with a 13km steady run, increasing to near marathon pace at the end.  I have been running slowly a lot recently but soon got my stride back and started to knock out sub 4:30 kms without too much distress.  I cycled a loop to Bingen and back, getting lost in some industrial area in bingen where all of the roads were for cars only and I couldn't find a way out!  Anyway, I cycled 88km at an easy 30km/h NP 230.

On Tuesday I cycled to nieder olm for a swim in the morning.  I did 2.5km in the nice warm pool, I thought I would be there 4-5 times this week so I didn't want to do too much. I could still feel my 3km swim from Sunday in my arms.  In the afternoon I went for another shortish ride, this time 50km also at 30km/h NP 243w.  It was windy (as always) so I gave it some up Schwabsburg südtisch, but I was a little disappointed to see I couldn't beat my 2013 time (yet). 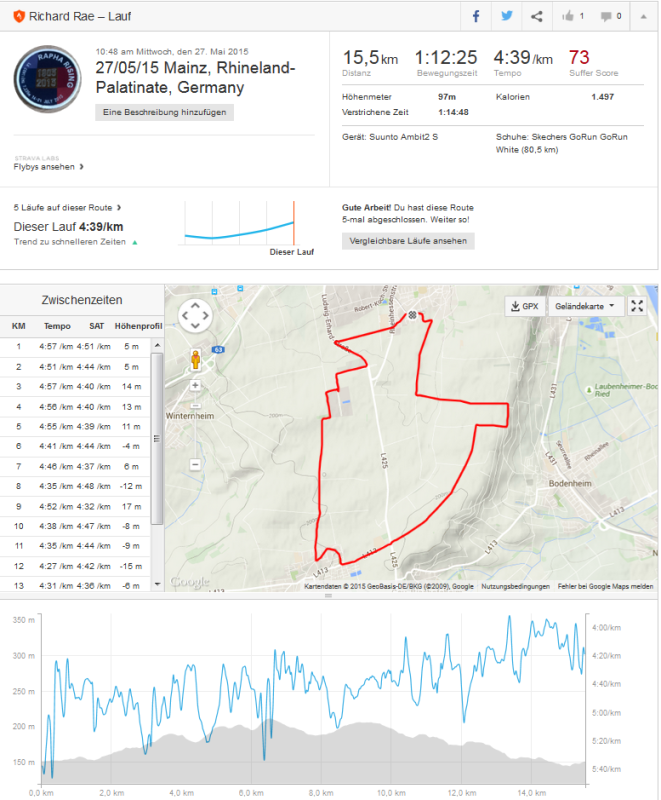 Wednesday I went for a bit longer bit faster run.  It was only my 15.5km loop through Ebersheim but the average of 4:39/km was decent especially when my HR was only 140bpm average.  To keep chipping away at my 500km week goal, I cycled 58km at 32.3km/h.  My 4iiii battery seemed to be dead, so I didn't have any power data for the ride.  I swapped over the battery after the ride and it seemed like it would be fine.  I was however getting a bit of neck ache , so I decided that I wanted to ride my road bike on Thursday.  I swapped over the left crank arm ready for a longer ride without destroying my neck!

So on my road bike I went for a loop south to worms, then back north in Hessen to Mainz.  I knew it would be about 115km, the wind was pretty strong from the south west, so the first half of the ride was hard.  For some reason my 4iiii wasn't being read by my garmin. It might have just been a simple – turn it off and back on – problem, but I rode without power again :(.  I felt good all day, I rode easy and ended with a 118.8km ride at 29km/h. My HR was only 123bpm average, so it was pretty chilled! 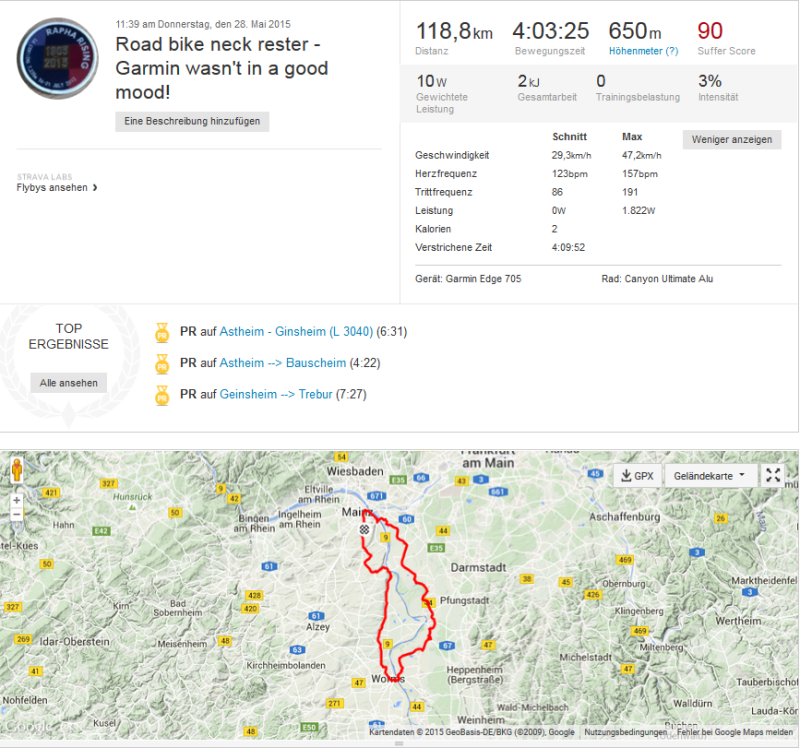 On Friday I belatedly got back to the pool. My swimming week wasn't quite working out as planned!  I did another 2.5km, felt good, but called it a day there.  The pool was actually quite busy for the first time this year. I was lucky that someone left the far left lane just as I arrived though, so I got my own lane and swam uninterrupted.  I ran with Katja, and found that I was having pretty severe stomach problems!  After having to stop after about 4km, I ran to just under 10km and decided I would just walk home as my stomach was cramping and things wanted to leave my body in a hurry!  I took the day off cycling as a rest before my TT on Sunday.  I still had to ride about 140km to reach my 1800k in May goal, but I knew that I wanted to do a little test ride on Saturday and that Sunday would be 100km with the ride to and from the start line.

So on Saturday I put on my Dyma aerodisc cover and went for a test ride.  The cover didn't feel very tight and whenever I hit a bump of any kind it would make a horrible clank and start to click.  I decided to go for the Caravan wobble tactic of accelerating to stop the clicking, which worked all the time until I was nearly home.  I hit a bump in the road and the clicking was really loud and didn't immediately stop.  I pulled to the side of the road to see that the cover had jumped the brake caliper and was stuck outside of it.  The joining area of the disc was also pretty cut up, I guess from previous bumps.  I put the disc back on and cycled carefully home.  A quick read of slowtwitch showed that lots of people tape the covers to their spokes, so I did that and it felt much more secure.
I went for another easy run with Katja in the evening, taking me to 50km for the week.

I will write a quite race report for my TT, but my disc held firm and the ride to and from the start were about 47km total.  That with the 44km TT and 12km to and from the pool in the evening took me over my 1800k in May goal.  As I say, I swam in the afternoon, but made the mistake of going to Taubertsbergbad.  It was blood freezing!  I swam 2km but at that point I was shivering in the water and my hands and feet were cold, so I called it a day, and a week!

So my 1800k in May self made challenge was completed.  I think the point of the challenge was to get me to do a lot of base miles before getting into harder riding later in the season.  In that sense it has been very successful.  I have found it quite stressful to get in the long rides and follow them up with other shorter rides, that's why I have been doing more 50-80km rides day after day, chipping away at the target.  The one exception was obviously my 200km ride, which was a real confidence boost, as I know that I can ride all day in aero and control my effort, sounds like an iron distance race to me!  Following on from this challenge, I want to increase the quality of my rides, getting in intervals at least once a week to get my FTP up.  I still want to aim for 300km a week or so, but without stress!  If I set my self a challenge again in the near future, I am sure it will be a swimming one, maybe something like 50km in a month.