I have never done a bike race of any kind before. I have ridden sportives, but they aren't races!  I wanted to try some sort of cycling race, so when I got an email about doing a TT, I signed up straight away!  The course is not flat, but not exactly a mountain course either.  There are about 330m of climbing over 43.4km, the route goes downhill almost constantly for the first 15km, then turns back to climb half the way back.  There is then a bumpy split off route that re-joins the main road at about 35km and climbs constantly until the end.

My start time was 8:25, riders were starting every minute from 8am onwards.  My main fear was that I would be serially passed, but not catch anyone, but I would be riding to power, so would be looking to hold around my FTP (or what my 4iiii says my FTP is) of 325w for just over an hour.  I had planned to ride just in my trisuit, but it was still really cold at 8:25am so I wore my long sleeve jersey too, I feel guilty about that now, I should have HTFU!

I got to the start line and was calm. I started, missed my clip in pedal as always but was soon off and running.  After a few minutes I questioned whether I had started my GPS or not, I had not, so I started it then.  On the fast downhill to Nierstein, I felt good, I was pushing my watts and trying to keep low and aero.  Soon enough I could see riders ahead of me, phew!  Before reaching the turning point I had passed 4 riders, that means two things: 1) I wasn't last! 2) some riders weren't very good! I wasn't too sure of which roundabout was the turning point, but after a little slow down and look around, I saw riders in the other direction, so knew I had to go to the next roundabout.

Although the uphill out of Nierstein is quite steep at times, riding to power meant that it didn't make too much difference.  I continued on, looking out to see who was behind me.  I knew that Max Michelberger started 9 minutes after me, but he is a very good TTer. I didn't want him to catch me, but when I saw him he was still a good bit back.  There were a few turns in Hahnheim that weren't too much fun as there is traffic and parked cars, but I obviously didn't want to slow down too much either.  Soon enough I was in Sörgenloch and on my way back to the main road for the final uphill push.  It was only near the end when it started to feel hard, my HR wasn't crazy high but I was starting to feel the burn a bit.  I finally passed the start point and had a few hundred metres downhill to the finish line.  I didn't know exactly where I was going, but found it no problems.  I stopped my Garmin at 1:04:20 but had missed the first 3km, so I don't know my finish time, (or place!) as I write this on Monday afternoon. I guess about 1:08:30 giving me a 38km/h average speed.  I wonder what my flat 40km TT would be? Could I go sub1h on a real flat course? 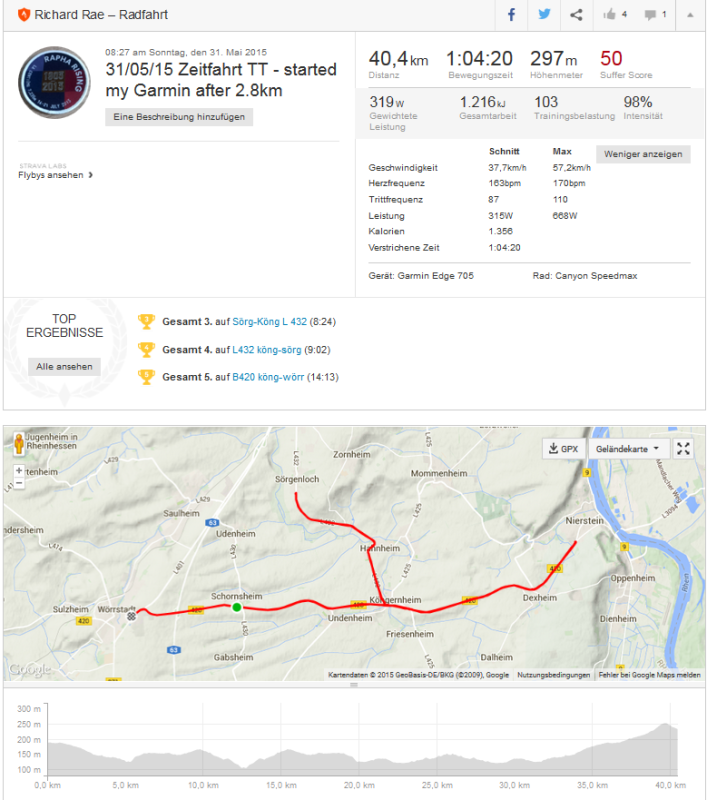 I heard that the other TCEC riders were pretty much all faster than me.  1:05:xx seemed to be the time they all managed, probably 3-4min faster than me.  I did hear that they all manage or would manage sub5 IM bike splits though, so it isn't too bad news for me!  Looking on Athlinks, Marcus Jores did a 4:54 split in IM Melbourne a couple of months ago, but was only 2.5 mins faster than me here, so maybe I could go about 5h in Köln if my training goes well.  I also didn't get passed, I think they sent the fastest people off near the end, so I was pretty safe, but it was still a little goal achieved.

I was having some serious comfort issues on the bike, so I will rest for a few days in the hope it heals a bit.  Plugging my data into best bike split shows that my power meter is correct if my CdA is about 0.32.  Using that as a basis, it predicts that I can ride 2:29 next week in Wasserstadt, without ruining my run.  That would be great!

I hate it when I can't find results online, so for people in the future who want to find them, here they are!