In Autumn last year, I thought it’d be cool to make a TCEC staffel team for the Mainz Marathon.  I saw that the winning time in 2017 was 2:45, with some decent runners, we should be able to better that!  I asked around and got good answers. Heiko, Stephan and Michael would run with me. That would be a 2:3x team.

A little later Michael had to drop out as he would be away, but Sebi took his place so we didn’t lose any time.  A couple of weeks before the race, Sebi dropped out, but Basti stepped in, another good substitution.  The day before the race Heiko dropped out and I had used up my pool of sub 38min 10k runners, but luckily Uli would run for us. He is nearer to a 40min runner, but would help us out in a jam.

I have been having my troubles recently, as were well documented in my Paris Marathon blog. I was diagnosed with low ferritin (21 – much higher than expected) so I have been on iron and am feeling better but still not good. Unfortunately I got upgraded from the 3rd staffel leg that was 8km route, to the 10k route, as Uli would take the 8km.

So having signed on on Saturday, we were good to go on Sunday. We met for the TCEC team photo and Stephan took to the start line.  For some reason Basti didn’t have his TCEC gear on. He has been in TCEC for ages and we were a TCEC team, an odd decision.

I rented a bike and rode to my staffel change area area. The toilets were surprisingly full considering the race was already underway!  I watched the leaders come through, then Raoul shortly afterwards, then some guys I recognise from races, but Stephan wasn’t there yet.  A couple of minutes later than expected, he came into sight and I got ready for the change over.

I set off a bit worried, but didn’t know if I could run fast!  I settled into a 3:45 pace which I was happy about, and I supposed that as I was overtaking people, I must be running faster than Stephan had been.  It was fun with the crowd there and I slapped some hands and waved Helau so the kids.  I was soon through the old town and feeling good.  Then I saw the 16km sign, I had only run 3km! 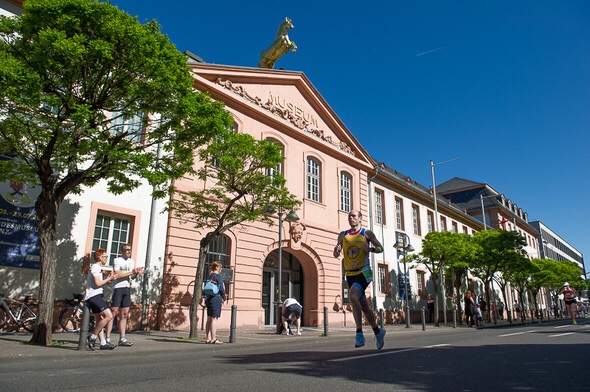 Wormserstrasse (the out and back) isn’t so bad when you are fairly fresh. I saw lots of familiar faces. The TCEC family that cheer at the turn are there every year, I don’t know who they are, but they are perfectly positioned and make me smile every year.  I kept on overtaking people who were struggling near the end of the half marathon, but at least they were nearly finished after 20km. I had to pass the finish line and go 2km further, over the bridge to the staffel change point in Kastel.

It got a bit quiet after the half marathoners were done.  I passed the half marathon line in 1:22:xx, slower than my time alone last year.  I saw Stephan on the bridge and asked what position we were in. 5th, bugger.  Over the bridge against the wind was tough, but it is short so done with fairly quickly. Soon enough I was over and found Uli at the change point. I had run 10.3km with an average of 3:51/km, not good, but not dreadful either.

I walked back to Stephan and Carola (his wife) to get my bag and watch Uli run by, before getting another bike and heading off to the 3rd staffel change area.  I only just caught up with Uli as he tagged Basti in.  We made our way back to the finish area.

Everything got a bit muddled, so we didn’t have a staffel team finish, but we did meet at the finish line.  I enjoyed my cake and alcohol free shandy and we sat around and enjoyed the sun.  Raoul won the Hochschulemeisterschaft again (this time for the marathon) and was the first German finisher, so we had to wait a while for his prize giving.

All in it was a fun day. I enjoy Mainz marathon weekend, even if I don’t run too well. I hope some time to run a good race there, 2019 would be ideal, though I don’t think I’ll ever do the full marathon in Mainz, it looks pretty lonely out there after km 21.