That all being said, it was time for Merzig City Triathlon, a proper Olympic distance triathlon, 1.5km swimming in the River Saar, 40km of flat cycling, and 10km running.  I have been a bit worried about the swim, it goes 750m upstream, then 750m back downstream.  The riverflow is very slow, but it still makes a small difference swimming upstream.

With the race starting at 10:30am, I set my Sunday morning alarm for 5:30am.  I had to get to Mombach for 6:50am where I met the team of the day – Michael, Marco, Tim and Robert.  We set off and were there in good time.  We got signed in and were ready in time to run a 2.5km loop before the race as a warm up.  The weather was warm and sunny, but the water was 19.8 degrees, so it was wetsuit legal (phew!!).  At exactly 10:30am we started.  It was quite physical at the start, but it soon spread out, i.e. everyone started swimming away of me.  I felt ok, but I was obviously quite a long way back in the field.  After what felt like a long time, I made the turn and could finally make my way back to the water exit.  I had the feeling that I had swum dreadfully, so when I got out of the water and saw 29:30 on the clock, I was actually pretty happy, it’s a bad time, but I had feared a 33+min time given how far back I was.

In transition I saw Marco was still there, but I was the slowest TCEC swimmer.  I got started on the bike and started overtaking people.  I wasn’t flying, but I was doing ok, my average speed was 38km/h and pretty much stayed there throughout.  As it is a 4 lap, 8 U-turn course, there are plenty of chances to see if you are catching someone or they are faster than you.  I caught Marco pretty quickly, and saw that Michael was a good few km ahead of me.  Robert and Tim were probably 800m ahead of me and seemed to have found a little group, no accusations here, but the 10+ people or so in the group didn’t seem to cover 100m total. 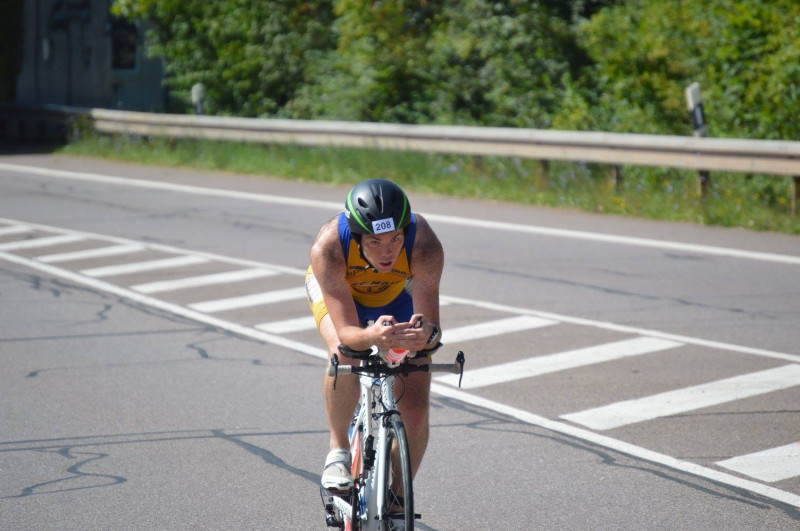 After 2 laps I didn’t seem to be catching Tim or Robert, but after 3 laps I was definitely catching Tim.  At the very end of the 4th lap I passed him, probably getting into transition about 5 seconds before him.  I had a great T2, largely because I had new triathlon laces on my shoes, and I decided not to put on my socks I had brought with me. 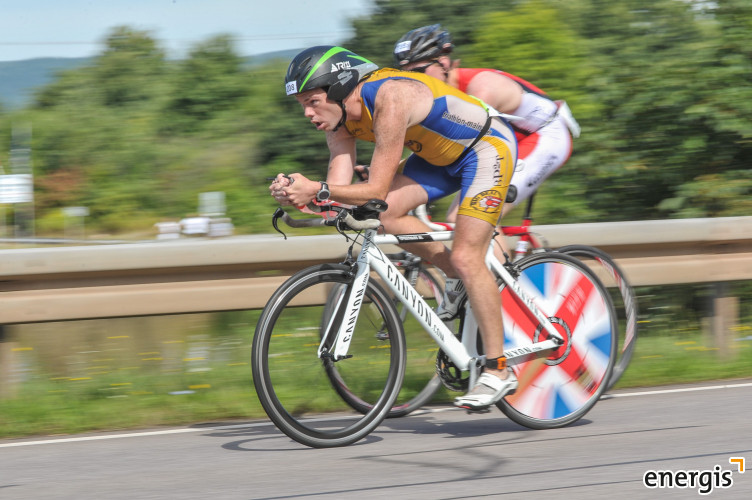 I started off on the run hoping to catch Robert, I ran the first lap in 9:20, that would give me a 37:20 run, but on the 2nd lap I thought I was going to have to stop for a comfort break.  If I had found a dixie, I would have stopped, but I didn’t so I ran on!  It weirdly went away, allowing me to run on until the end.  What was getting progressively worse though was my foot, which was rubbing in my shoe and had blistered.  It was quite painful, but the race was nearly over.  I passed a few more people, happily re-passing someone who had overtaken me earlier on.  I ran in a 38:20 time, I didn’t see Robert at any time in the run, so he had beaten me. 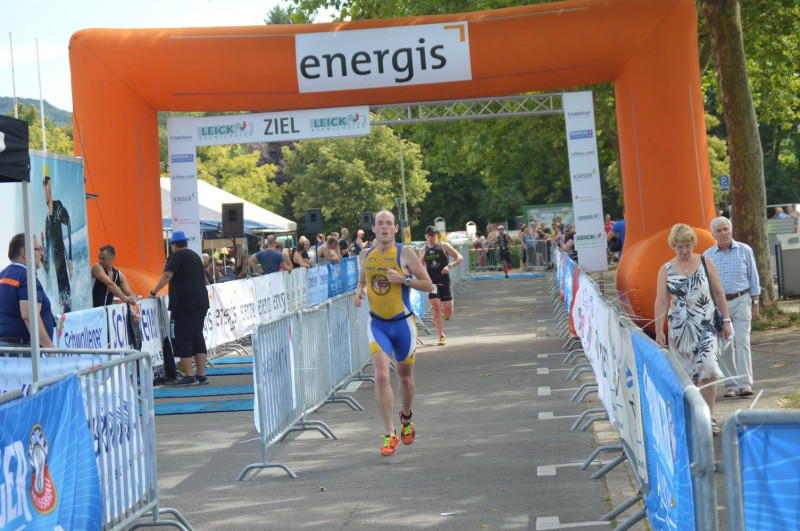 I was content with my performance, my swim was crap, my bike was ok and my run was decent.  My placing for each was 39th, 12th and 8th respectively.  For some reason I can’t push so hard whilst running in a tri, my heart rate was only 160 average at the end, it should be 170+ really.  On the bike I also couldn’t put out the watts that I usually do.  I think I need to move my saddle back a bit, I had moved it forward recently but it seems worse now.  One good thing from the ride was that I held aero position well all the way.  I found that if I clasp my hands together, then my triceps don’t get as stressed.  Also I can hold the bars between my middle and ring fingers, that also seems to help too.  I don’t know why, but it does!

So overall in the league, I was 15th and TCEC was 3rd, it definitely could have been worse! I also got another/replacement beer glass like last year that I broke a while ago, that makes it well worth the journey!

Next up is the Vereinsmeisterschaft in 2 weeks, then Remagen Olympic 1 week later, then 3 weeks later is Berlin. For all my whinging about not swimming enough, I won’t swim much before Remagen, or ride much either.  Berlin Marathon is my goal so I will be training fully towards that, especially if the weather gets cooler, then I might knock out some big weeks.