After a few nice days in Paris in 2 nice hotels (1 with the worst carpet in the world!) I had arranged to meet Has to sign up to the marathon at 14:30 on the Friday before the race. I handed in my ‘medical certificate’ and got my start number. I wasn’t ready for the race, but I would be running it anyway!

As you can read, the last month before the Paris marathon has been a nightmare, a constant mix of being overtrained, ill, allergic and injured. That’s not ideal for getting ready for a marathon. My heart rate has been constantly high for a while now, at rest and while running. My hope was that after enough rest, my body would somehow digest the training that I’d done, recover and spit out my fitness returns. Well if it was going to do that, it was waiting until the last minute to do it! I was still feeling like crap 6 days before the race, when my last real run before the marathon.

I knew that 2h50 was possible if everything came together, but if not then I would be miles off with my recent form/health. I would go out at 2h50 pace anyway and see what happens. Who knows, maybe I’d feel ok!

So on the day of the race the alarm went off at 5am and I ate my Pain aux Chocolat and pita bread and waited. At 6am Katja was awake and we went to down to breakfast in the hotel at 6:30. It was a bit annoying to see this great breakfast spread, but knowing that I couldn’t eat it!  Katja enjoyed it anyway.

We met up with Has and Audrey at 07:30. Katja would spectate with Audrey whilst Has and I ran. I felt a bit odd about the race, nervous of course but sometimes I feel nervous, but ready. This time I was nervous and not ready, I felt badly unprepared. 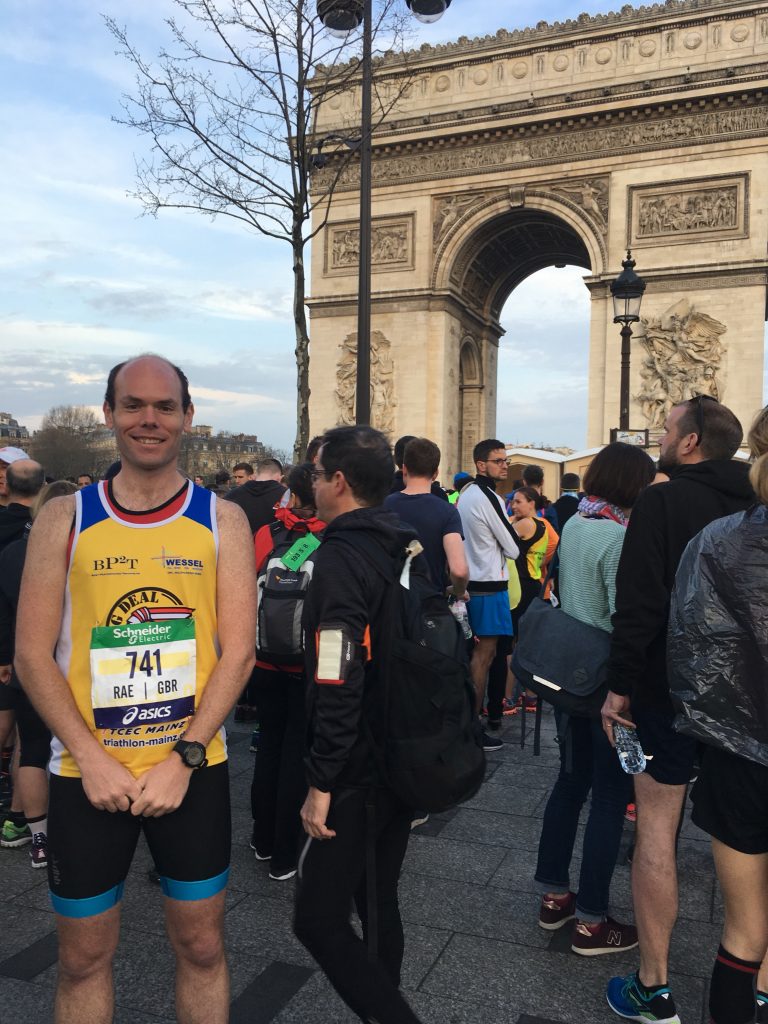 In the start pen

After saying goodbye to the others, I went into the start pen. I had heard that there wouldn’t be enough toilets, but 1 toilet seemed a bit over the top. There were also 4 urinals, which I used. Funnily 2 minutes before the start the toilet was free, that might be a pro-tip for next time, be brave and do your business at the last moment!

The first km is downhill on cobbles, I found my tempo of 4:00/km and felt ok. It was a bit warm even at the start of the race for me, but it wasn’t too bad. My heart rate belt was playing up and showed variable numbers for a while. With a 170 heart rate after 2km I was/would be in major trouble, but it then went to 160, which would be ok. It soon settled down a bit, and showed that I was going too fast, and my heart rate was too high.

I kept on anyway, seeing Katja after 6km and giving a shaky thumb to indicate that it wasn’t going great. After 10km 41 minutes had passed, I was a little slow for a 2h50 marathon, but on PB pace. That was pretty much irrelevant though, it wasn’t going to happen, I knew that already.

After 13km I made the decision to pull the plug on my race, I would run on to the end, but I couldn’t race it anymore and hope to get to the finish line. I started to slow and my heart rate fell a little, but I didn’t really slow too much for a little while. I passed 14km after 58:30, I wasn’t on PB pace anymore.

That was the kick I needed, I gave it up for real and decided to run/walk it in, like I did for Roth last year. So after a 45 second walk I ran for 9:15  every 10 minutes until the end of the race! For the first 4 intervals I was still running at 4:15 pace, but then that started to fade too.

Just get to the end

I wasn’t bothered about my time anymore, I just wanted to get to the end. There was a long tunnel after maybe 25km which they called ‘Hell’ it was a bit weird, it was actually nice and cool compared to the sunny 18-20 degrees outside, so it wasn’t too hell-like for me. (I’ve since heard that is where Diana died, it seems in poor taste now!)  In the next tunnel they played Funky Town, a Roland Cake favorite! I couldn’t help but laugh.

Mentally I always felt like it was always going to be okay. Even after 25km I was thinking, only 8-9 more run/walks. My quads were getting pretty sore, so restarting after the walk breaks was starting to get pretty painful. My 9:15 runs we’re getting slower and slower too, but as I say, time was not relevant anymore, but my legs were so dead.

After about 36km Has overtook me. He had started 2 minutes after me and was having a decent race. I didn’t try to go with him. I doubt I could have anyway, but it didn’t make sense if I was run/walking. Finally after 40km the walk breaks were over and I would run to the end. Those last 2.2km dragged like a mo-fo. I felt like they would never end! I got to see Katja again just before the end then clapped some hands on the run in before crossing the line in 3:17:32. 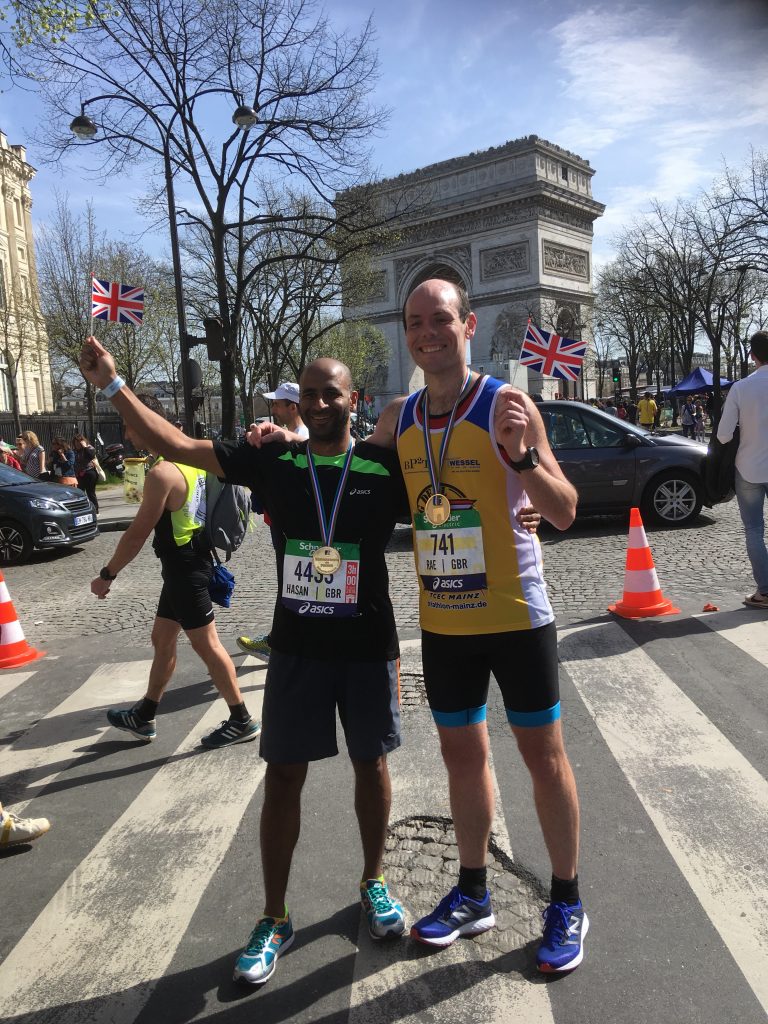 It was a nightmare day, too warm, my legs weren’t there and my fitness is just gone too. I think it is just a bit of overtraining that has led to this nightmare, I will take it easy for a good while now, I need to lay a cycling and swimming base anyway.

I think I am done with marathons now, I might try one off triathlon training some time, but that won’t be until at least Autumn 2019.  Paris Marathon has been a dreadful experience for me, I hope the rest of the season is much, much better!