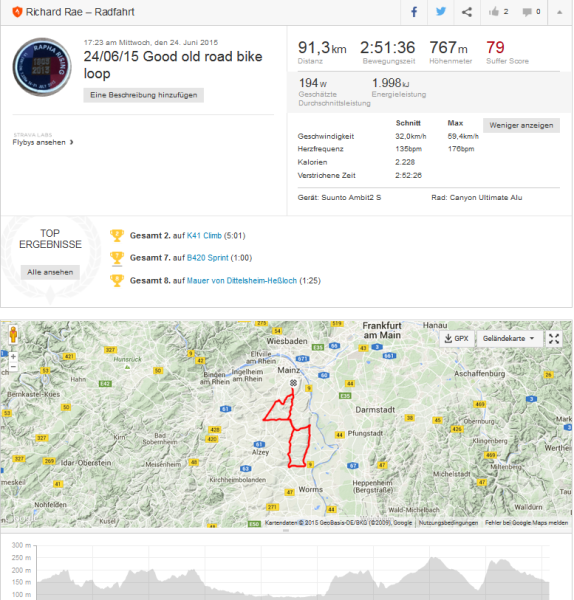 I made my debut for TCEC yesterday in the 2. Landesliga.  The event was the Nibelungen sprint triathlon in Worms, 750m swimming, 22km cycling and 5km running.  It had been cold most of the week and stormy, so I had expected that it would be wetsuit legal.

Troubles even getting there

Jochen picked my up at 8am, he was going to Lampertheim sprint triathlon, which is quite close to Worms, so I joined him and would cycle the last part.  Obviously the roads were closed between Lampertheim and Worms, so my 10k cycle became an 18k cycle, but no harm done, my start time wasn’t until midday anyway.  I found the TCEC tent and the organisers had no idea who I was, I guess that’s what happens when you never go to team swim or run training!  Karl-Heinz seemed to be in charge and was a really nice and friendly guy, he gave me a TCEC polo shirt, told me where to put my transition stuff and explained a bit about how it will all work (there are 2 separate transition zones and they take your bike in T2, you don’t have to park your bike).

I rolled over to the swim start area with the masters team as they were starting at 11am, even though it was barely 10am.  I got my bike checked in, but ended up sitting doing nothing for nearly 2h, except for watching the Masters start and finish their swim.  They had worn wetsuits… Christian Hafner was in the masters team, another nice guy, I spent most of my time before and after the race talking with him.  He had done a 1:26 last year and was hoping to get below 1:20 this year with a bit more experience and training behind him.  About half an hour before the start we were told that it was not wetsuit legal, some rubbish about the youth teams swimming with us and that means we can’t wear wetsuits…  It was cold, so that wasn’t ideal.

We started on the dot at midday.  I settled into my swim pretty quickly.  I gave up a few places in the manic start, but soon started catching people and overtaking.  It was a one loop swim and it was over pretty quickly.  I saw 12:13:59 as I stepped out of the water, so a 14min swim, ok not not spectacular.  I got to my bike and a team mate was already there, another – Christoph, arrived immediately after me.  My transition wasn’t great but ok and I left just behind Christoph and a bit behind Tim (the guy who was already there).

On the cycle I found pretty quickly that I was about the same pace as Christoph, so I tucked in 10m behind him. We passed quite a few people, including Tim.  The course was quite technical with lots of right angle or more turns.  Otherwise it was flat and fast and there were always people around me.  I wanted to pass Christoph for a while, but as the route was narrow, I couldn’t.  Eventually I managed it, apparently annoying him in doing so, he came back past me a few seconds later.  The cycle ended pretty quickly and I was soon in T2.

Although we had been told that they would take our bikes from us, they didn’t, and apparently we should have just known that we should hang them on the rack at the side…  After a few seconds lost there, I ran to my shoes.  I was number 231 but couldn’t find where my place was.  It is obviously mainly my fault for not making a mental note earlier, but as I ran back and forth along the rows, I was getting frustrated.  It must have lost a minute there.  I hadn’t got my watch set to run, but looked and saw it was just after 12:48, so I could expect a 1:08 end time with an ok run. It was hot and there wasn’t a cloud in the sky for the run.  I set off and soon saw that I wasn’t the slowest!  Only one overtook me near the start, whereas I passed a few.  It was 2×2.5km, but the first loop seemed to last for ages!  There was a TCECer was behind me and that the 2 ahead of me (Christoph and Max) were long gone.  I ran ok, but seem to be lacking my top gear, same as all of my other races recently.  I got overtaken by the TCECer behind me (Stephan Jung), and ran in to finish in 1:07:37.  It was  pretty decent overall, though my transitions were rubbish and my run could and should be better.
. 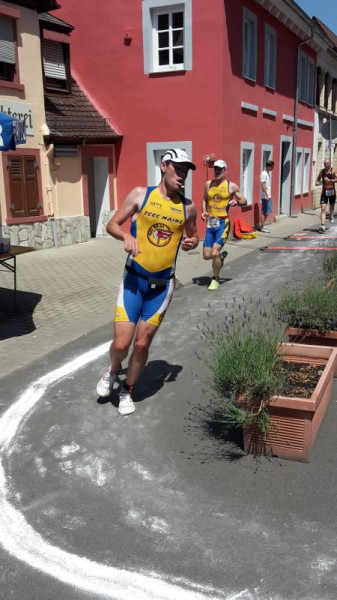 So that’s the end of the Nibelungen Triathlon and my 5 weekends in a row of racing. I am glad that it is over to be honest, now I can get back to training!  I still plan to do Merzig Sprint on August 15th and the club championship 1 week before Köln.  A Taunusstein Olympic distance is also my list on the 26th of July too, though the 550m of climbing over 40km cycle route seems tough!