I have wanted to ride the Maratona for a few years now. In 2014 and 2015 I didn’t get picked in the draw.  Last year I got together a few people and made a team application, which apparently increases the chance of getting a place.  Sure enough I got in! I could look forward to what is said to be one of the best organized and prettiest sportives in the world.

I have ridden 2 major European sportives before. In 2012 it was a nightmare in the Marco Pantani Gran Fondo. I went too hard on the Gavia, nearly died on the Mortirolo and cut short my planned long route to the medium route.  In 2013 I had decided to was time to get serious. I rode La Marmotte.  With 5200m of climbing over 176km, it is a bit of a beast, especially when the weather is hot, which it was at about 38 degrees!  I was very happy with my training and performance though. I snuck in a Gold Medal time and surpassing all of my goals I had made earlier in the year.

I still felt like I would be fine for the Maratona, despite my lack of training.  My goal time was 6:30 and I had decided to try to climb at between 260 and 280w, never going above 300w if possible.  I had done something like that before last year, and even after 200km and 2700m of climbing, I felt fine.  So, we got to Italy on Friday and found our apartment at the top of a 4km long steep hill!  We decided to race up it for fun. Jochen set off fast, but I soon caught up and even got ahead of him. Unfortunately he then punctured and had to push the rest of the way up. My confidence was further improved!

After lots of formalities and food, it was time for the ride on Sunday morning. We had to be at the start before 6:10am and it was 13km away with 250m of climbing.  Germany played against Italy the night before, only winning on penalties, so the 4:30am alarm hit pretty hard!  Although the weather was good, it was damp, cold and still a bit dark when we set off to the start.

At 6:30 the good riders started. A few minutes later we moved too. I thought it was the start, so started my GPS, but after 500m we stopped again. About 20 minutes later is was actually time to go, so we set off.  I had decided to ride with Jochen, as we are pretty comparable riders.  Dimi had brought a brick of a bike, so was riding really slowly. Sam and Stephanie seemed like they were there to enjoy the course, so also would be a bit slower.

The start was pretty busy, but the climb of the Campalongo starts after only a few km, so it spread things out a little. I couldn’t put out much power due to the traffic, but it was probably a good thing in the long run.  We passed people literally left and right for the entire climb, before getting to the top and starting the first decent. 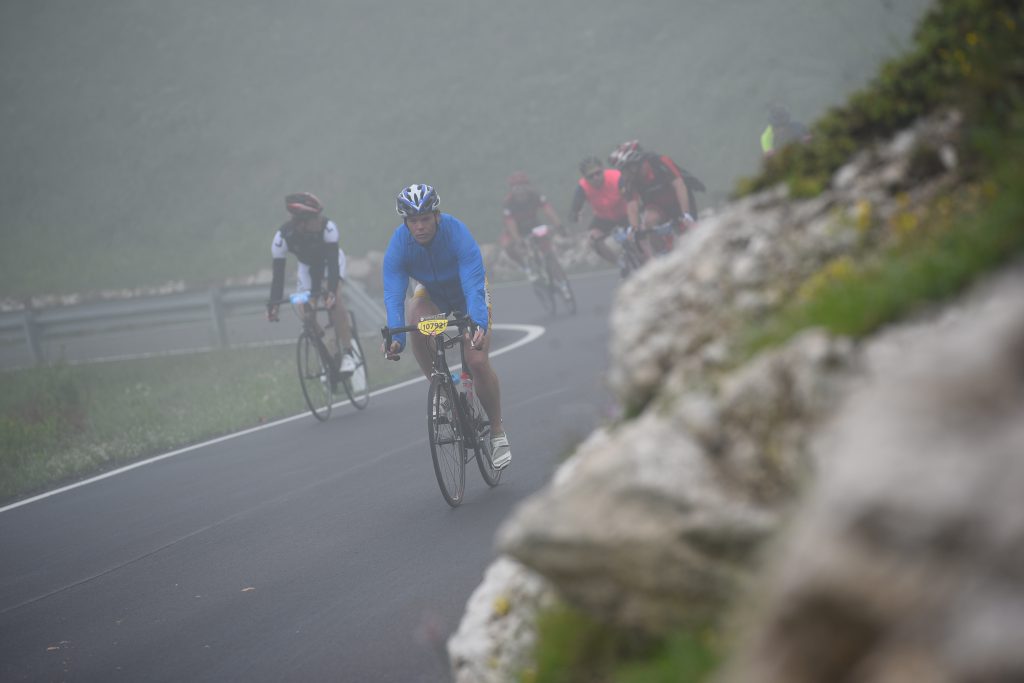 I know that I am not a great descender, and Jochen is a bit better, so I was happy to keep him in sight all the way down the short decent.  After about 4km the 2nd of 7 climbs started, another pretty easy one to be honest, and another where we just constantly passed people.  On the descent I was going pretty well, even getting ahead of Jochen, but then I skidded my back wheel out a little, and then saw someone injured on the road a little later, my fast descending was done for the day! 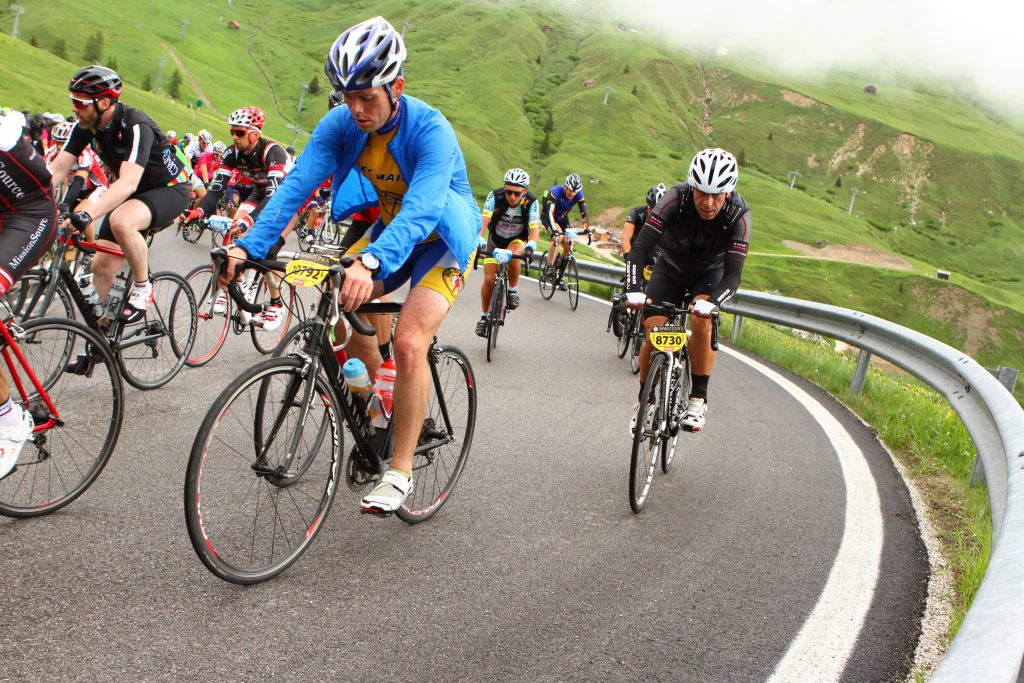 I remember that on Passo Sella I finally managed to get my power output right.  It is a bit steeper and the traffic was starting to thin a little.  It still seemed pretty easy though.  I can’t remember the 4th climb, but the 5th climb is the Campalongo again, and this time it was much clearer, as we were faster than most and hadn’t stopped for refreshments yet.  We had decided that on the flatter part at about the halfway point we could stop for a refill.  That happened to coincide with me running out of drinks too, so was pretty much perfect. 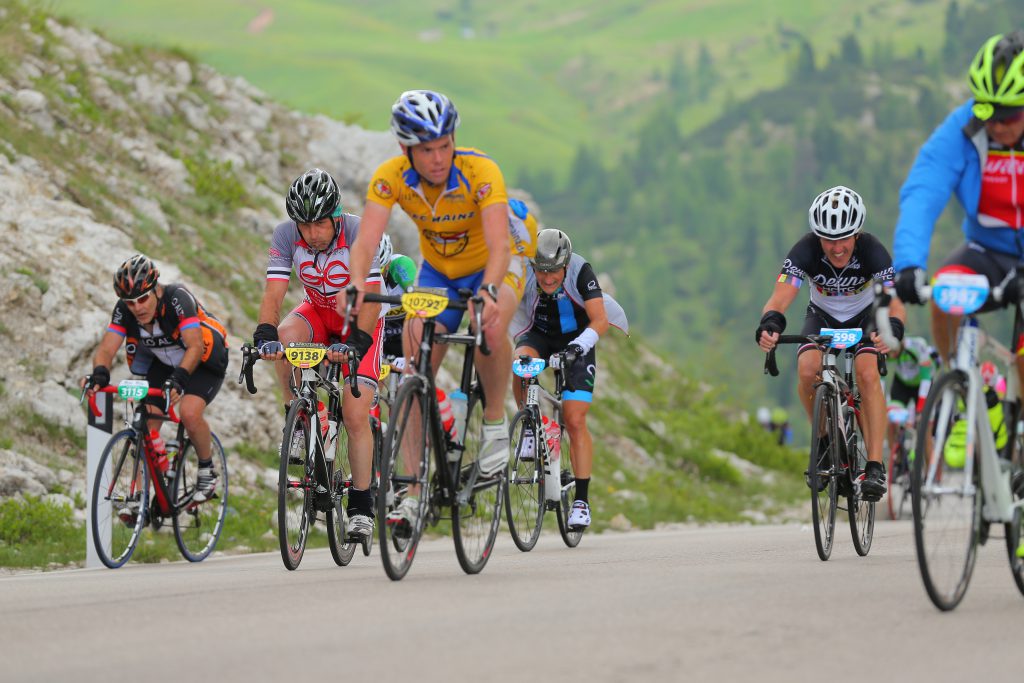 I had been wearing my wind jacket all day as it was a bit chilly, but it was starting to get too warm for me.  I decided to change before Passo Giau, the hardest climb of the day.  On the 30km flatter part in the middle of the ride I had decided that I would try to find a group and ride easy.  Jochen decided to get on the front of a group and do about 95% of the work, not a brilliant idea!  There were 2 pretty significant climbs on the ‘flat’ part, but it wasn’t too tough. 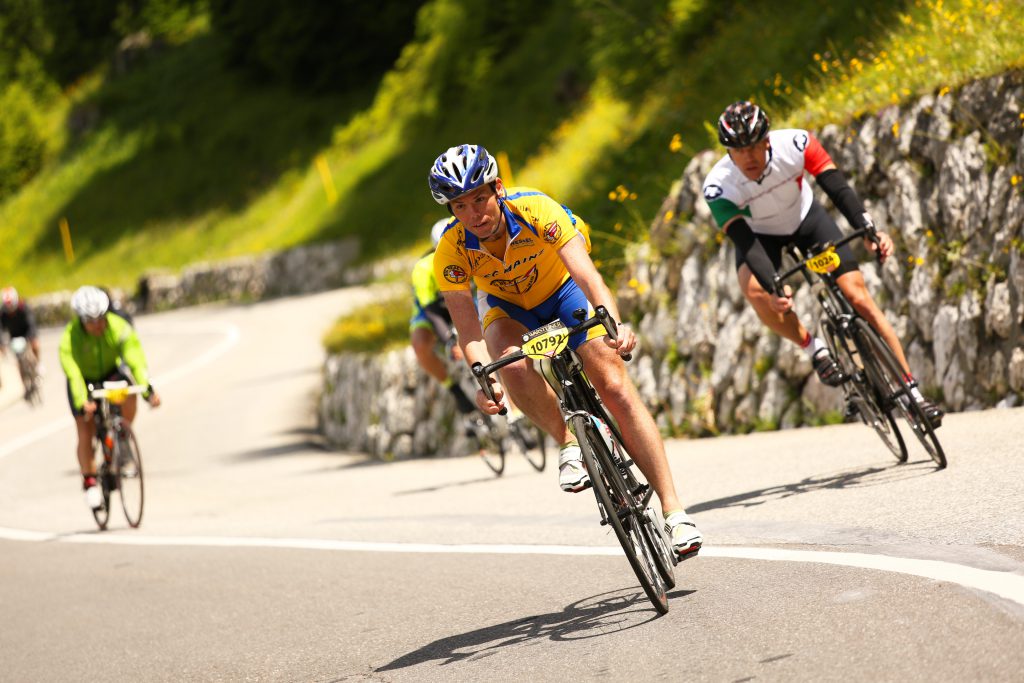 The 2nd half – Passo Giau

At the bottom of Giau I was still feeling good. My legs were getting a little tired, but nothing too bad. As soon as the climb started I knew this climb was a different kettle of fish. It was steep!  It’s the main climb of the Maratona. Jochen had got away from me on the last descent as I had stopped to take off my jacket, so he was ahead.  I caught up to him after 1-2km and he was in trouble.  He told me to leave him behind, which I did, and he seemed to disappear pretty quickly, considering I was spinning at 60rpm in my lowest gear (34×27)!

Giau did seem to take a while, but I was always sure that I would make it to the top.  It felt more like the low RPM was killing my legs, instead of the steepness if required power output.  After about 56 minutes I reached the top and had a 90 second break to refill my bottles, drink coke, orange juice and sports drink one after another and get going asap.  Only the long Maratona route goes up Passo Giau, and the people who I was climbing with were pretty good riders.  Pretty good riders can descend pretty well, I cannot.  I did not pass 1 person on the decent. Lots of people passed me, and rode out of sight in a matter of seconds!  I was happy to be down when we started the last climb of the day, an 11,5km climb, but only 5.9% average gradient.

Just one more to go

It was a fairly easy climb again, but I was getting tired.  There was a long false flat in the middle, but I enjoyed the fact that the top is at exactly 2200m and there were signs to show the altitude at each 100m increment.  After 3800m of climbing, knowing there are only 200m more to the top really is a nice feeling.  The metres clicked away quite comfortably. I wasn’t passing quite as many people now and I was behind 2 guys called Stig and Cornelius (awesome names!) for quite a while.  At the top there was a drink station, but knowing that the last big climb was over, I skipped it.  I saw I had 5:55 on the clock and 20km to ride, 6:30 should be possible. 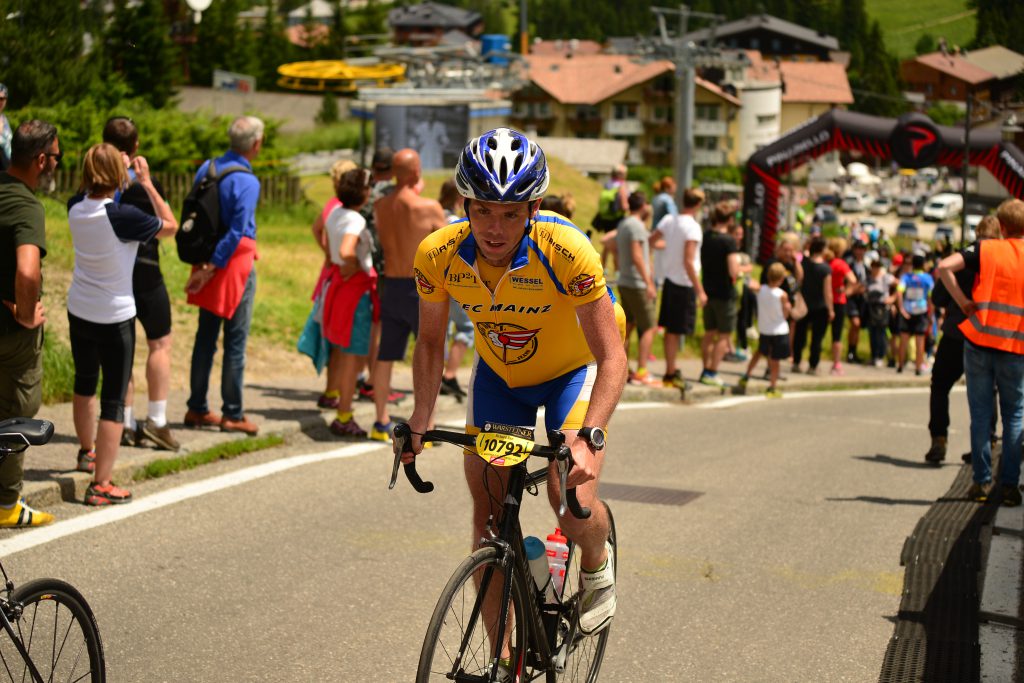 The race to the finish line

I descended quite well, and the Maratona medium route people were on this descent too, so I could even overtake some people!  Every now and then I looked around to see how much was left to ride, and how much time I had in hand.  By the time I had got to the bottom in La Villa, I could average less than 20km/h to the end, and still go sub 6:30.  I had heard that there was a sting in the Maratona tail. Then I saw it, the Giat or Cat.  It is only about 250m long, but it was about 20% all the way.  I just stayed out of the saddle and ground it out to the top.  Then I set off on the last 3km, all slightly uphill.

I thought I was leading a big group and was asking for help, but no one was coming through to help me.  It turned out that only 1 guy was behind me. It didn’t matter, I was still annoyed!  With 1km to go, I had 6 minutes in hand, the race was run.  I zipped up my top, tried to make some room for myself and celebrated my last few metres, hoping for a good photo or video (neither worked out!).  My final time was 6:26. I am pretty happy with that.

In the finish area I head that ‘Big’ Miguel Indurain was there.  I shook his hand, told him he is a hero, and took a selfie with him. Lots of others were doing the same, so it doesn’t really look like he is having a photo with me!

25 minutes later Jochen finished too. Then another 1h35 later Dimi finished.  It turned out that Stephanie and Sam got DQ’d for missing the cut off. They were already back at the apartment, even though we waited for them for ages at the finish line, poor communication all round. After eating and drinking, we just had the little matter of the 13km home. That includes the 4km 9% climb to the apartment.  It wasn’t as bad as I expected really, we took it easy. We still dropping Dimi, but got to the top in the end.

All round, I really enjoyed the Maratona.  Next year I will do Roth, so I doubt I will go any big sportives. If I can be bothered to train, I would love to ride the Ötztaler Radmarathon. To be honest that and the Alpine Brevet are the only ones that really scare me enough to inspire me now.  I do think I have unfinished business with the Mortirolo, and I need to climb Ventoux some time, but the Ötztaler seems like it should be next on the list.

Next up, Merzig Olympic Distance in 6 weeks. I will be marathon training from now on in too. Berlin is only 12 weeks away.