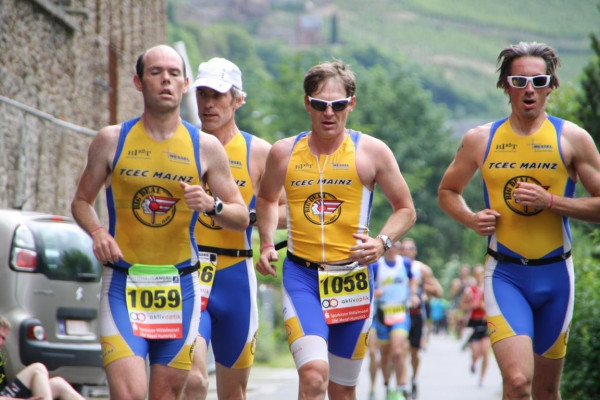 We got into transition together and start of the bike was hectic.  We were trying to get into a line, but other teams were doing the same right and left of us.  We eventually got going and I took the front.  I didn’t feel like I was pushing too hard, but after 30s I pulled off the front, and no one came through. I continued on, but no one passed me, then I heard the shouts, we weren’t together anymore, Marco was off the back.  The rest of the ride was really easy, Stephan was on the front, I was 2nd and trying to pace Marco as best I could, and Volker was at the back making sure we stayed together.  I was surprised that our average speed was 37.5km/h after 8km, the ride was really flat and only 14km long, but it felt like we were doing about 32km/h!  Soon enough we were back in transition, we had actually passed a few teams and only been passed by a few, so again, it wasn’t too bad. 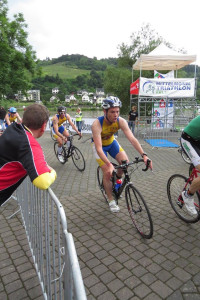 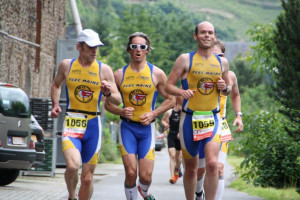 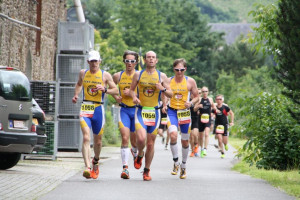 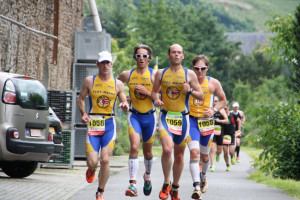 We had a quick change of shoes and set off on the 5.2km run.  It actually went better than I had feared, we started at 4:30/km pace, but slowly accelerated ending at 4:00/km pace for an average of 4:15/km. The run was still very easy for me, and for Stephan too. I couldn’t see Volker too often but I think he was cruising too.  Marco was at 100% all the way and really fought for the team like a trooper.  I have been in that situation in our Bike and Run in Cologne in 2014, and it isn’t easy or fun when the others are jogging but you can’t keep up!  He gave everything though and we came away with a pretty respectable 6th from 13 teams in the 2. Landesliga.

It was mentioned by a few people and I can’t help but wonder about what would have happened had we had 1 more fast runner.  I personally think I could have comfortably run 9:45 and 19:30 for the 2 runs, already 4 minutes faster than we actually did, add in a faster bike, say 1 minute faster and we would have been under 50 minutes, quite easily winning the 2. Landesliga. Obviously that isn’t the point of the race, but it does show that we aren’t far away from being a good team for that league. The first team isn’t strong though, so I think we will lose our best people pretty consistently in the future.  We will see though, maybe we will find some new people who can step in and do well.

I found out that my next league race in Merzig is actually an Olympic distance, not a sprint.  I will have to do some swimming in prep for that. The bike and run courses are good though, both flat, even if the run is a little technical.  I have until the middle of August to get ready for that, so I don’t have to worry yet!  Something else I am contemplating, Rudern gegen Krebs might well be cancelled due to the high water level of the Rhine.  If it is I might sign up for Lampertheim sprint, which is 500m-20km-5km.  Last year Jochen was 3rd, I reckon I could win it if all goes well.  It’s a pain to get to, but if I can’t row, then it is an option, we will see later in the week.