On Saturday morning Jochen wrote again, he wouldn’t run, he drank too much on Friday night, so I thought I would just cycle, I got ready to ride, then saw another message, Jochen would run after all, but he would drive to the start, so I put my running stuff in my bag, and cycled to Wallertheim.

Last year it was very hot and humid for this race, I remember it being quite hard, not hilly, but not 100% flat and it has lots of turns.  This year it was dry, not so humid and cool at about 20 degrees, near perfect running weather.  I cycled the 30k to the start and was there in good time.  I saw that Christian Bock was there, so I wouldn’t be winning today!  At 3pm I pushed to the start line and started the race completely free of traffic. Quite a bit group of people were ahead of me, but I looked at my gps after maybe 400m and saw that my pace was sub 3:30/km, too fast.  I immediately eased off the pace and let the group go, and pretty soon afterwards the over-ambitious runner of the group started to fade.

After about 2km I found my way up to Peter Merkel, a good runner who beat me in Framersheim.  We ran together for the rest of the first lap taking turns on the front, I don’t know if that was on purpose or is just what happened, but it worked out well.  At the end of the first lap I saw the leader going in the opposite direction, but no one else, it turns out that about 4-5 of the fastest group were running the 5km, so I was in a fight for 2nd place.  I was feeling pretty strong, but as we went back out on the 2nd loop, Peter was just ahead of me and I started to have some negative thoughts of letting him go and cruising in for 3rd.  That was until on a long straight slight downhill I could hear that I had a step or 2 advantage on him.  I looked around, then accelerated to try to break him.  At the turn around I had about 20m advantage on him, but I know that I am generally faster on the flat/downhills, but he is better uphill.

Something a bit weird happened at the turn around, a guy asked if he could pace me, I said ok, but that I would be running my own pace, so he ran in front of me for the next 1km on the slight uphill.  As soon as we hit the flat I passed him and he peeled off. I knew then that I had 2nd place in the bag, as it was all flat or slightly downhill to the finish line. It didn’t sit very well with me that this random pacer guy got involved in the race for no reason, I guess if it happened in the other direction i.e. he helped someone who was 1 place ahead of me, I would have been pissed off!  Anyway, I got onto the final straight and ran pretty hard for the last few hundred metres.  I saw my time was 37:13, which was faster than I had expected given that I am carrying a little extra weight, and I haven’t done any intervals in a long time!  I reckon on a fast course I would have been sub-36:45, so basically near my 10k PB time. 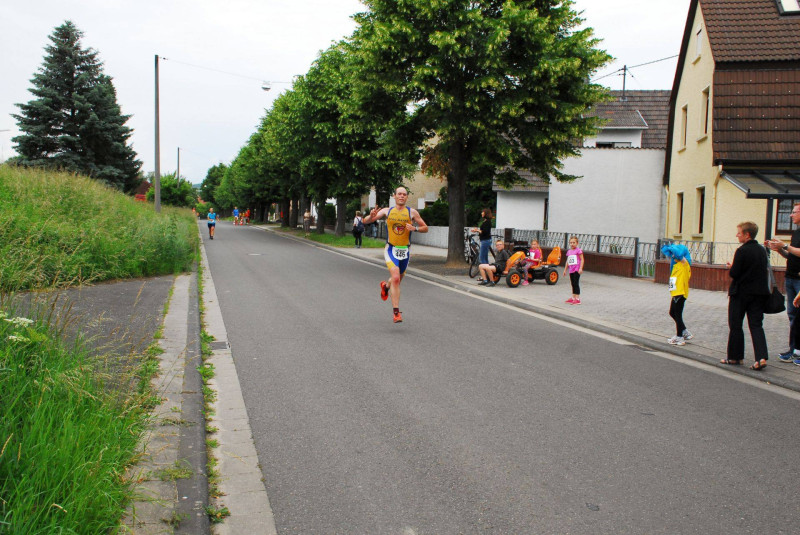 Jochen, who amazingly didn’t start too fast, came in a strong 4th place in just over 39mins.  I think it was a pretty successful day.  I decided that I would wait to collect my prize, most probably a bottle of wine. The race started at 3pm, I was done at 3:37, most were finished by 4pm, the prize ceremony started at 5:15pm for the 5km race, and they decided to call out every participant’s name so they could go to the front and collect their certificate.  I left when they started with 40th place in the 5km race, as I knew there were about 80 runners in the 10km and they planned to do a tombola, so I reckoned that they wouldn’t be done until at least 6pm. That was the only really annoying part of the day, the rest of the race is really good, but waiting more than 2h after a 40min race is stupid.

The race has really helped my confidence, and I feel like my next marathon campaign will be starting at a good base level.  I don’t have any races planned for a long time now, as I messed up my planning for Worms Triathlon, so had to drop out. That means I might not race until August in Merzig.