After Wasserstadt on Sunday, I decided to have Monday off, so no training.  I have felt like that was a good choice, but that I wanted to get my full week of training into 6 days hasn't been such good thinking, especially with a race on Saturday meaning more intensity and less long stuff.

Thursday was a longer post work cycle.  I went out to do my 72km loop that I have done a couple of times, but somehow I managed to get lost in Alzey.  After getting back on track I got through the ride pretty comfortably and with a nice 33km/h final speed 236w AP 255w NP.  It was 74km too, which is a long evening ride for me!

On Friday I got up early and ran.  There were 2 reasons for that, I am starting to fall behind on my running, I am fitting in 3 runs a week but with little to no intensity and nothing long.  That means that I am ticking through 30-45km per week, which isn't a nightmare, but it isn't ideal either.  I might have to do more pre-breakfast runs to get some extra km in.  It was also going to be HOT on friday, so I didn't want to run in 30+ degree heat in the evening.  I did the run anyway, 10.7km at 4:56/km, felt easy but already quite warm, crazy.  I went for a swim on Friday straight after work, even though I knew that the pool would be rammed.  It wasn't as full as last week, but still pretty damn full.  I had decided to swim 1500m, but ended up doing 2000m.  I actually had planned to go further, but a few idiots were blocking the lane, and as I passed someone I accidentally hit a swimmer going in the other direction.  As that was after 1990m or so, I just called it a day.

Saturday was Wallertheim 10k race day.  That is covered in the race report, but I cycled on my road bike to the race.  It was just over 27km.  I cleverly avoided getting on the podium so I could leave early and do an extended loop to Mainz.  I did about 45k back to Mainz, feeling pretty dreadful.  I had bet with myself that my average speed was 23km/h or so, but checked it and saw it was 30km/h, so I guess I was just feeling down.  I cycled straight to the charity event 'Run for Children'.  This team event is held at a running track, loads of company teams run laps for 10 hours, with each lap completed resulting in a 1€ donation to charity.  Me and Katja were running for a Schott team as Jochen had invited us.  I knew that running 400m intervals probably wasn't the best idea after a fairly long day, but I did it anyway!  I pushed the pace for the first few, but soon decided to settle into a comfortable pace for the rest.  I would guess I was running 1:30/400m, so not crazy fast with long breaks between runs.  I think I did about 14 loops, but it could be more or less.  Our team did our 2 hour stint and I was finally done for the day at 9pm. 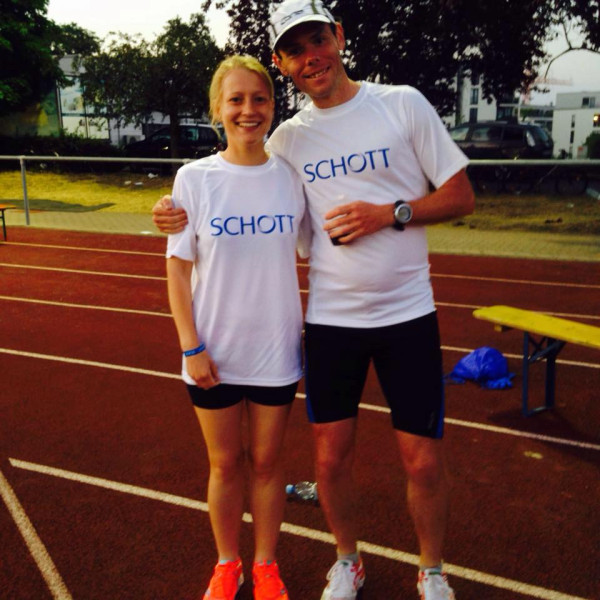 Today I could feel yesterday's exploits, but it wasn't as bad as I had feared.  i wanted to ride the Kloppenheim duathlon cycling route to see what to expect next week.  To get to 300km for the week I would need to cycle 125km today, which seemed doable.  Jochen messaged me early to ask about riding together, so I met him to ride the loop.  I wasn't really up for a fast ride, so did lots more sat up riding instead of in aero.  We arrived at the start and went for the loop.  It is quite hilly, but not crazy really.  I didn't time it as I wasn't pushing the pace, but apparently we did 47 mins or so.  I reckon there is plenty to come off that time, but we will see next week.  We cycled 94km at a slow 27.6km/h average 188w AP 221 NP.  With the weather being so warm again, I decided about 30 mins ago to bin cycling to the pool for a swim.  That means I won't have met any of my goals for the week, but I am feeling pretty flat at the moment, so I don't think it is worth pushing through to hit some made up goals, better to recover and start afresh tomorrow.