This was part 2 of the Wingertscup for me, it wasn't a big goal for me, but I did fancy trying to get a decent time and hopefully gauge my running fitness, which I expect to have tailed off quite a bit since Bonn marathon.

I cycled over to Wallertheim against a fairly unfriendly head-wind, it was about 27.5km to Wallertheim, and I arrived in good time.  I didn't warm up much, but was ready with 100 or so others at the start line at 3pm.  It was quite warm, but I hadn't thought it was too bad.  The race started and as always everyone sprinted off like idiots!  I looked at my GPS after 30 seconds or so and saw 3:20/km, far far too fast.  I settled into my pace and fell into a group with a few people ahead of us.  Soon enough the group slowed down and after about 2.5km I had left them behind.  The route was 'flat' but wasn't pan flat, more like always slightly up or slightly down.  It went in a small loop through the town around lots of tight turns, before going on a long out and back on the way back to the start line.  Each loop was 5km, so we would do it all twice. 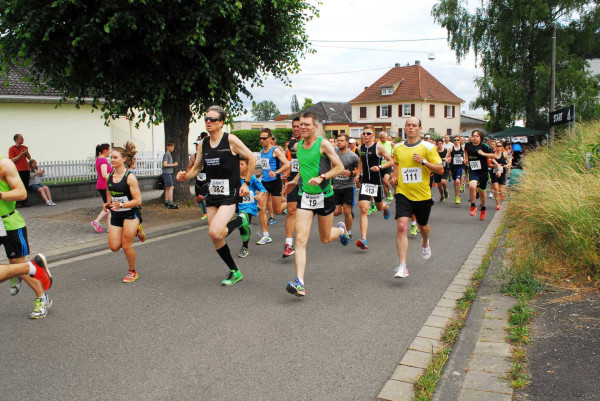 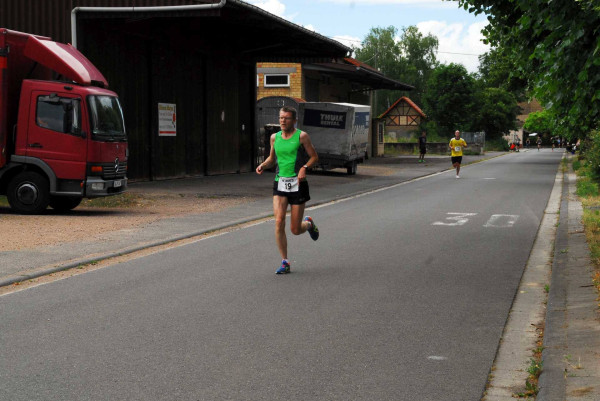 As I approached the turn around I counted about 4 ahead of me.  I could also see that lots of people who had been in the group with me were falling way back.  Running back into town was directly with the wind, and it was absolutely boiling hot, very uncomfortable.  I could see that only 3 were ahead of me who were doing the 10k after the first 5k loop was finished.  I was only a few metres behind 3rd place too (see above photo), so I thought I had a good chance of the podium if I didn't fall apart.

The 2nd loop was just hot.  I think the humidity was the main problem.  I had looked at my heart rate after about 2km and had seen that it was 180, even though I felt very comfortable at the pace.  I wasn't really able to get my heart rate down, so I would guess it was from the heat.  I ran just behind third place for the next few km, at the turnaround I had caught him, but as we turned with the wind again, I was starting to boil again and he moved a bit ahead.  I had counted that it was 20 seconds after the turn before I passed the next runner, so that meant I had a 40 second gap, I should be ok unless I almost stop!  The gap stretched to 3rd place and I kind of gave up the ghost.  At the time I felt like a bit of a loser, as I felt like I should run faster, but I just couldn't in the heat.

The last 500m or so were the home straight, I started to pick up the pace and got close to 3rd, but couldn't do enough to pass him, so finished 4th place in 39:49.  I was very disappointed with the time, but I really do think that in a cold race I would have been a lot faster.  4th place isn't bad though, the same as last time!  So my 2 results are done and dusted, I need to do 2 more from the next 3.  I am not sure if I will do Oppenheim as it is 1 week after my Ironman, we will see. 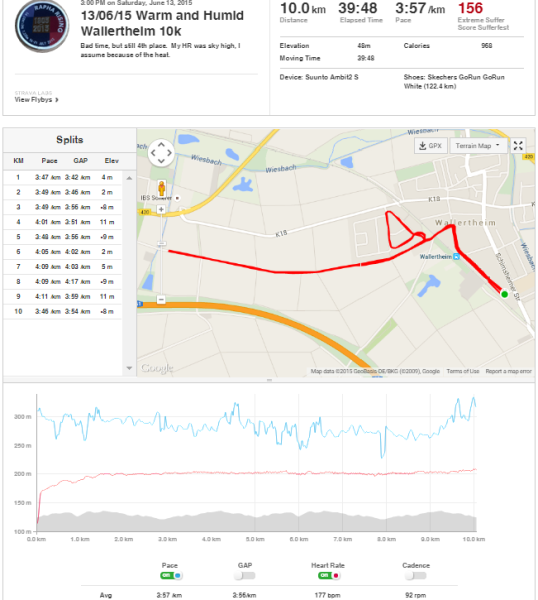