I had decided that I would do a 12 week build to the race, starting straight after the Maratona.  It would be 3×4 weeks with an easier week every 4th week.  I was aiming to run 100km on my up weeks and obviously less on my down weeks.  My routine for Rotterdam worked well and I wanted to do that again. That means running 8 times a week, with intervals on Wednesday, a ML run on Thursday, an easy double on Friday, and a long run on the weekend.

Some of that plan worked out. I did run 100km per week pretty much in my up weeks, but looking at my training log I see 3 proper interval sessions over the 12 weeks, along with 4 that are borderline, so not on a track, or not organised intervals, or were cut short due to the heat. Even being friendly and saying that all 7 count, it is 2 fewer than I should have done. In reality I did 6 sessions too few during the week.

Summer running – not having a blast

So why did I not train as well for Berlin? Well it was too hot for me to train properly this summer!  It has been almost constantly sunny, and over 28 degrees for the last 12 weeks.  In those conditions I cannot run an over 30km long run with quality. I just cannot do it.  Intervals are also more difficult in those conditions, but the fact that the running tracks were closed in July also hurt my interval sessions early on in training.  I guess laziness also has to be included as a reason. I like running, but when conditions are hot/humid, I prefer a nice E paced run for an hour or so, not a 2h run and not hard running either. Having achieved my main 2 running goals in spring, it was also a little more difficult to get motivated knowing that 2:45 was unlikely. 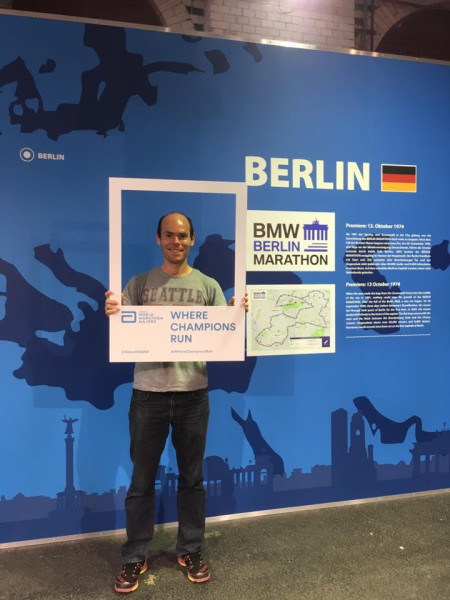 So to the race: Katja and I got to Berlin on Thursday and I checked into the race as soon as possible. I did a little running analysis, which showed that I am a very efficient runner. Nice to know!  On Thursday and Friday we did a good amount of walking around and seeing the city, before taking it much easier on Saturday.  I felt ready on Sunday and got to the start area just over 1h before the 9:15 start time.

The toilet queues were crazy and I ended up waiting 40 mins or so to go, so I was in a hurry by the time that was done and dusted. (Note: the long queue where I waited is the stupid person queue, there are lots of other shorter queues around, but they are a little harder to find).  I changed into my TCEC trisuit and checked my bag and went to the start.  The start is further away from the start area that I expected. So much so that I started to worry and even jogged part of the way to the C block.  I got there with 8 minutes to spare and pushed my way into the middle of the block, ahead of the 3h pacers. 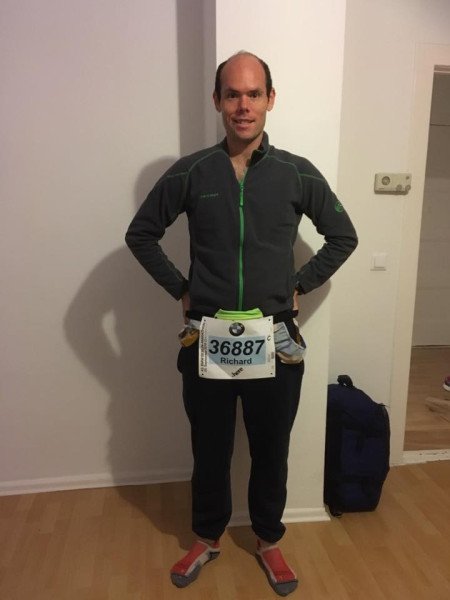 The countdown started and it all seemed quite surreal, but within a few seconds it became real and the Berlin Marathon 2016 started.  I have never had such a clean start to a race before, let alone a big race!  Apart from a small woman who seemed to be walking, I didn’t have to slow at all really, and I was at 4:10 pace within metres.  The course in Berlin is wide and flat, and the roads are long and straight.  I was running at just faster than 4:00 per km pace at the start according to me GPS, though the 5km marker showed I was actually just over at 4:01/km pace.

The next 5km also went ok with my pace staying about the same, but I really wasn’t sure about holing it for the whole race.  The 10km-15km split was a few seconds slower and by the half way point I knew it was going to be tough.  My heart rate was always around 163-165. That’s just a little high for my liking, 160-162 would have been fine.  My pace was slowly falling though, and I went through the half in 1:25:18.

I said to myself that even a 1:30 second half would get my a PB, so if I could just keep up a good pace for a while longer, I could cruise in a decent time.  My sub2:50 dreams were already gone. There was a zero percent chance of me running a negative split!

The kilometres kept ticking away, even if it was starting to hurt more and more, at 30km I had to have a quick toilet stop but I was happy that there were only 12km to go. I think that would have fazed me in the past, but now it just meant there wasn’t too much more to run!  I hadn’t seen Katja after 7km as I had hoped, and I also hadn’t seen Has anywhere, so when I saw Heiko Braun at 32km I was really happy to see a familiar face.  The kilometres kept ticking by and I kept running into a headwind. It wasn’t strong, but it was still noticeable.

I had seen the 39km sign a few times over the last few days, and knew that it was close to the final turns towards the Brandenburger Tor.  I was looking for the 39km sign for what felt like an age, and when I finally saw it I knew it was nearly done.  There was some weird stuff going on between km39 and 40. It looked like an Ekiden hand over point (though it would be too late for that) and someone had a baton to pass to someone, but it was a firework which made a bang, then fired sparks everywhere, it was a bit crazy!

Soon enough I was at km40 and a look at my watch showed that I wasn’t going to break my PB.  I gave myself 10 minutes I think, but that wasn’t going to be enough, not when you think it takes 2mins for the bit after the 42km mark.  I ran on a bit disappointed, then realised, hang on, it’s like 200m after the 42km mark, that is max 1 minute of running, so I should actually PB, if I kept up a solid pace.  The final long straight was with the wind and you could see the Brandenburger Tor and the park where it all ends.  Just before Brandenburg I saw Katja, which was a good little boost.

Strangely I don’t remember running through Brandenburg. I think I may have been looking at my GPS!  I saw I had 90 seconds to break my PB, so I pushed the pace without sprinting and 30 seconds later knew that I had it.  When I crossed the line 2:55:16 had passed- a 20 second PB. 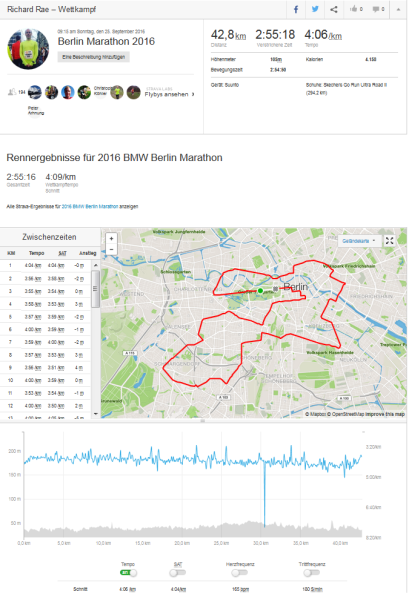 The aftermath – everything hurts

I was very tired. My feet really hurt, my hips ached, but I was done!  There is a pretty long walk after the finish line, where I got my medal and after a while got something to drink.  I had to be careful not to drink too much, otherwise I would have been throwing it back up soon enough, like someone else I saw. 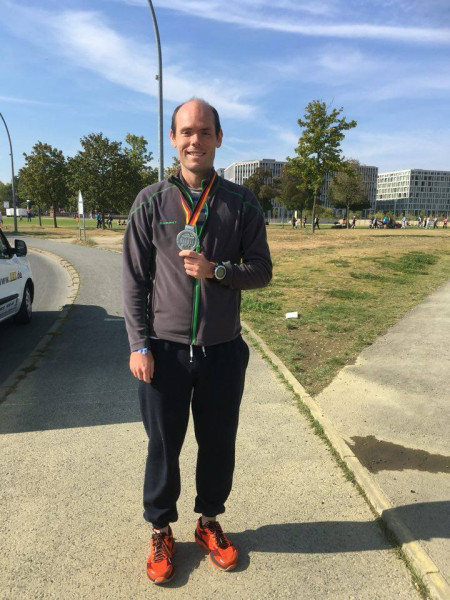 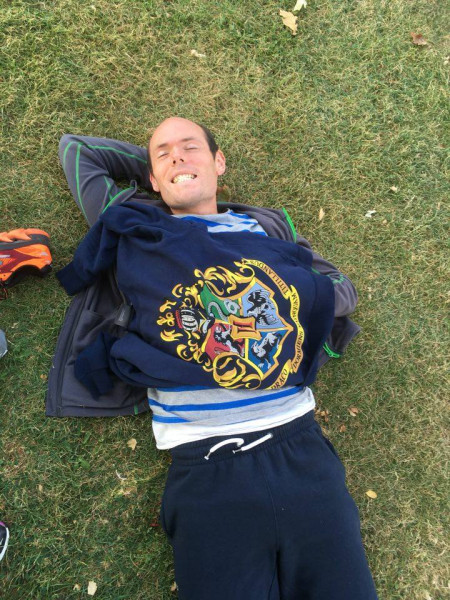 So at the end of the day what I can I say?  My training was worse than for Rotterdam, I most probably weigh more (I was just over 79km for the race) but I ran pretty much the same time.  That says to me that I should run faster given better training and more consistent training over the coming years.  I could also weigh less, but it really doesn’t seem to come off as easily as I would like.  I hope one day to run a good marathon, i.e. one that matches up with my half marathon time, which at the moment would be a 2:45, but hopefully will be faster in the future.

If I get a place in London, I will definitely run it in spring, otherwise I might not run a marathon in Spring 2017. I could run a few HMs and 10ks along with my triathlon training for Roth.

The plan now is 1 week of complete rest, then some cycling, swimming and maybe an easy 5-8km run or two. Then I can slowly start to run again.  I think I need the rest so that I can start fresh again for next year. I shouldn’t cut it short due to boredom.  The shorter races in winter should be fun, a 35min 10k is my next big goal time, so I hope I can manage it.

Anyway, see you at the next race 🙂