I found it a little strange, but the Gimbsheim Sprint Triathlon, that only has a 500m swim in a outdoor 50m pool, lets you swim in a wetsuit!  I only found that out the night before the race, so washed my wetsuit and was ready.

I got up at 6am and ate my normal breakfast. That is 3 weeks in a row that I have had a 6am Sunday morning alarm!  I had to meet Michael at 7:30 in Gau-Bischofsheim to ride to Gimbsheim, so there wasn’t much dilly dallying time.

After finding the start area, we only had 50 mins before the race started. I signed in and saw the race briefing, but time was tight so I only ran for 4 minutes before heading to the toilet.  After getting my wetsuit on, I swam 100m in 1:28 and was good to start. The start took me by surprise and as happens in every triathlon I do, everyone swam away from me.

Christoph, Ludwig, Michael and me had a lane to ourselves, and they are all good swimmers.  After 200m I started to catch Christoph and after 400m we were neck and neck. His flip turns kept him with me, so we finished right next to each other, me less than one second ahead of him in 7:35.  Michael was faster than us and Ludwig was even faster still.

Luck on the Bike

A guy overtook me after about 10km.  It was like a lovely dream, I could legally, or borderline legally draft him and take a rest.  After I while I passed him and put out some power.  He passed me again soon after and we caught Michael with about 1.5km to ride.  I decided to try to steal a few seconds and went to the front, but after getting my feet out of my shoes, I was back behind the guy that had passed me earlier.

I had a dreadful T2 and lost probably 15 seconds at least.  Michael is a very good runner, so I knew it would be hard to catch him. The other guy turned out not to be a great runner and I passed him after 600m or so.  Michael wasn’t getting away from me and I seemed to be bringing him back very very slowly.  At the turn-around he was less than 5 metres ahead of me, so we ran together for a while.

After 4km, Michael asked if we should race, or run in together. The easier thing to do would be to jog it in, but it is a race and we should respect that, so I said we should race it.  I made a couple of surges but didn’t feel like I could sprint.  With 200m to go Michael edged clear and finished maybe 2-3 seconds before me.

The funniest point of the day for me was when Christoph finished the race. The finish line wasn’t very clear and Michael shouted that he should push on to the end, so he sprinted through the finish line, and on for another 80m or so to the amusement of all onlookers who were shouting for him to stop 🙂 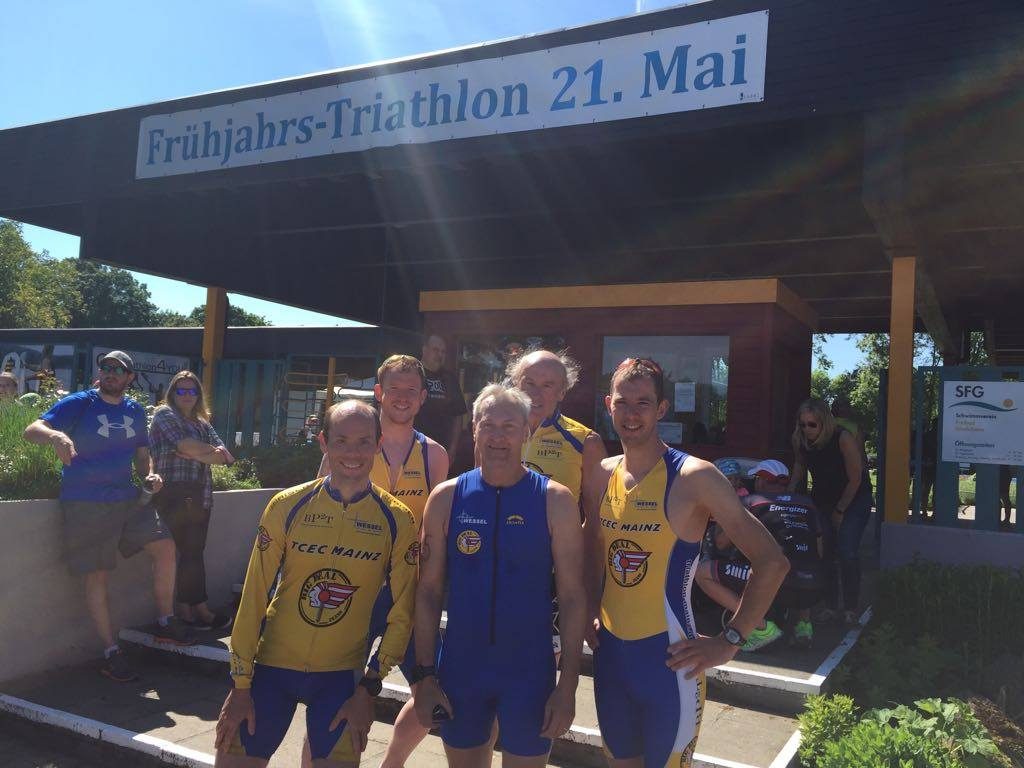 My official splits of 7:43- (1:14) – 30:33 –  18:39 are pretty good for me, the bike could be improved though.  My transitions were poor, I lost over 10 seconds to Michael, which could have been the difference between us. For triathlon though, I am happy with how my 3 sports are coming together now. Officially I came joint 3rd overall and won my age group.  1st place was more than 2 minutes ahead though.

Thinking about it, I think that my improved swimming set me up for my good luck on the bike. Last year I would have been 90 seconds further back, and would probably not been passed on the bike, or seen Michael at any point, but I would have been much slower overall.  I hope it is similar in the league races this year.

So there is no triathlon until Zell Team Sprint in 4 weeks now.  I will be sleeping later than 6am on Sundays, but piling in the training from now until then. See you then!