Not alot to say about this week going into it. I am feeling a bit tired, but all good.  Thursday is a bank holiday so I will be splitting my long run and long ride to Thursday and Saturday/Sunday.  I might ride the Undenheim RTF on Sunday, if anyone else fancies doing it too.

Normal – cycled to the pool, swam 1h10, cycled home.  We did some 200m repeats at different tempos, I felt quite good, except for having to get out of the pool to poop after the first 3 repeats!  I was getting told off that my head is too far down too, I need to work on that.

After work I ran. I picked out a relatively hilly route, so that I would have some accidental quality in the run.  I ran 1h15 with a low HR, even though it was quite warm

Having been too lazy to run before work, I ran in my lunch break. It was just for 30 mins, but a bit faster than normal at 4:30/km.

After work I was feeling tired, but I knew that once I was on my way on the bike that I would feel better.  I wanted to ride 15mins at or near FTP (Sprint race effort), so rode to the TT course from last week. On an uphill it is much easier to control your effort, so a long drag against the wind means I can keep my watts where they should be.  I stupidly started too late, so got to the top after 13.5minutes.  It was ok anyway though.  I only managed 307w, I still can’t quite get my power out.  All in it was 46.5km in 1h27 with a 240w NP.

Thursday was a bank holiday (76kg) so I decided to do my long run to separate it from my long ride at the weekend.  It was 2h15 of run walking in the heat. It was probably only 25degrees, but in the sun it was pretty warm.  I felt fine all the way round and ran 27.6km with a low HR of only 135bpm average.  I was pretty dehydrated at the end, I will probably need water when I run either longer or in even warmer weather.

Later on after a break in town (more ice cream!) I cycled to swimming. It was only 15 minute from the town centre to the pool.  Training was only 1h15 as it was a holiday, we swam 3k with quite a lot of backstroke.  I would have like to do more, but time didn’t allow it. I might swim long on Saturday…

It was hot and I had time in the bag, so I only ran for 1h on Friday after work. My pace was pretty good (4:37/km) and it was quite enjoyable.

It was another hot and sunny day. I really wanted to swim but I couldn’t get 3 together to swim in the 50m Mombach pool.  After cycling to Mombach anyway to try my luck, I found that no one was there. I couldn’t even check the sign in book as it was locked and the freibad (outdoor pool) entrance was being used. 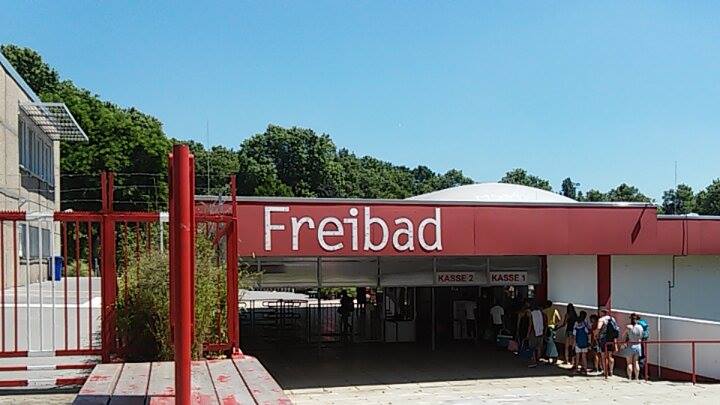 I got up at 7am and wanted to get out by 8am (I was a bit late). To ride the Undenheim RTF, it’s just a route set out with some control points, far from a race. I had to be signed in by 9:30 and it is 16km away.  My main reason for riding the RTF was to get some nutrition on course, it was a hot and sunny day again.

I set off and found the .gps route tough to follow, but I mainly kept on track. After the first control after 22km, someone decided to shadow me for a long time. I dropped him shortly before the 2nd control after 57km on a very steep climb.

The control points all had food and drinks, but were very sparse. I almost felt bad taking refills as they were almost empty (I still did though). Just before the 3rd and last control, the gps route on my garmin stopped working and just showed a straight line back to the start.  Control 3 had lots to drink, so I filled up and set off.  I pretty much immediately was lost so set off towards Alzey.  It was the wrong way, so I just planned a route back to Undenheim that would get my my kilometres. 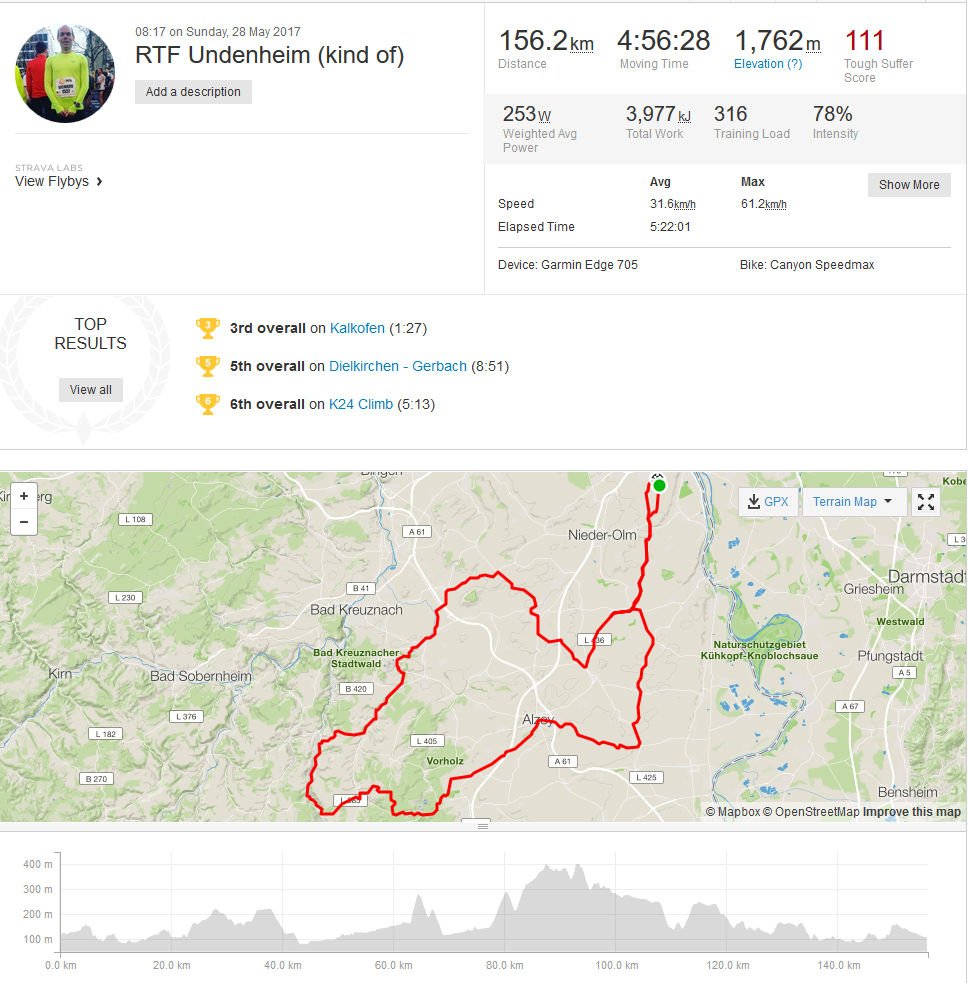 Going completely the wrong way, I got to the end of the 112km ride after 122km.  With the 16km to and from Undenheim, my ride was 155kmin just under 5h.  It was a sweaty one, and I was covered in flies, but I think I rode quite strongly, and I could stay in aero almost all the time.

I had planned to run in the evening, but saw that I had my 18.5h done for the week, so I just chilled out.

I feel like I am doing pretty well with my weight, even though I haven’t really lost much.  I am noticing things that are new and strange, like new veins on my legs, or that my belly button looks strange because it is much flatter.

Everything else seems to be going well too. I only have 3 big weeks of training left, 3 long rides and 3 long runs. Everything else is relatively doable.  I think that the coming week will be tough, as it is a 5 day working week. I don’t have a race for a while. After this week I will always have days off in the week to share out the pain of the long workouts.