Cycled to swimming, swam, cycled home. Not much more to it that that!  I think we swam about 3300m, but we did lots with flippers and far too much in backstroke, as appears to be the trend.  I was feeling pretty good though and swimming off the front.

On the way home I did some sprint intervals, just messing around, but a good sign that my legs feel good.

It was a warm, humid, thunderstormy day, just generally horrible.  I still went out to run my 1h15 though at a decent 4:42/km pace and actually it was much better than expected.  You could ring out my socks after the run I had sweat so much, but I feel like I could still run a sub 3h30 marathon in those conditions.

I got up at 6am to run for 45 minutes, it was cool and dry, much nicer than yesterday evening.

After work and after a little nap, I cycled for 1h20.  I had planned to do 1h-1h15 but there was lots of traffic in Mommenheim and I had to wait 5minutes at least for the traffic lights in Kögernheim to change.  Otherwise it was a decent 42km ride, my bike is handling much better since I messed aroung with the headset.

Swimming day, but I was so tired. I still cycled there and swam, but I felt pretty flat and even felt tired on the way home too.  Apparently we swam 3000m, according to my watch, I cannot confirm or deny that.  I got stuck in traffic for most of the session so just swam easy, except for the sprints, which were too short for my liking at 25m or so.  There were no good hard efforts that resembled a race effort.

It was warm again and I knew I had a big weekend ahead of me, so I just ran 1h15 after work. It went pretty well and was 16km total in 1h15.

I wasn’t sure in which order I would do my long run and long bike this weekend. The weather forecast wasn’t helpful either, it just said it would be stormy at some point. At 11am I decided that I would ride on Saturday, in case it poured down on Sunday.

After I set off, I noticed immediately that I had forgotten my glasses and any food.  I didn’t really know where I would ride, but ended up going into Hessen and doing a Worms loop.  I wanted to extend the route, as my normal Worms loop is only 120km, more like 4h than 5h30.

All started well, but not far from Worms after maybe 2h, it started to rain a little and there were dark clouds in most directions. 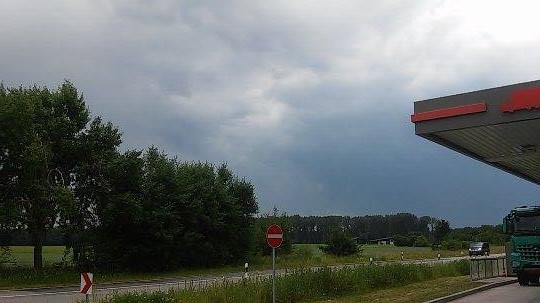 I got quite lucky that I avoided any bad rain, but I noticed that I didn’t have my keys, so was in trouble when I got home. I asked Katja to hide me a key outside.

When I got quite close to home, I had planned to add an extra loop to get me to 5h30, but the heavens opened and I was soaked. I had been rained on frequently during the ride, but this was something else.  I decided just to head home after 4h36, almost 1h shorter than planned.

With the weather now supposed to be cooled and maybe rainy, I set off for my 2h30 long run. My guts were ever so unhappy for the first 1h at least.  I ran to a park in Bodenheim where there is a toilet, only to find that they wanted 50c to use it now, as there is a wine festival on, I used it without paying and carried on with the run/walk.  I felt like my running was decent, but it was warm and sunny, the weather forecast was crap this weekend.  After getting a drink after 2h, the last 30m were fine.  The long run of just about 2h30 and 31km was done.

2h later I was off again on the bike. I had cleaned it and waxed the chain and tried to fix a rubbing freehub on the front wheel since yesterday, so was worried that it would fall apart!

It didn’t fall apart and the ride was pretty uneventful. I wanted to do 2h15 to get to 19h for the week, the amount written in the books plan.  I had to roll around a bit at the end to get to 2h15, Katja will be annoyed to hear this bit. It was ok in the end, about 69km but low power and tired legs.

It was a hard week.  The weekend was stressful, not just because of the weather, though that didn’t help.  doing 9h+ over the weekend with a long ride and a long run isn’t easy when you are already quite tired.  I am very happy that I only have 2 big weeks left.

Next week looks similar to be honest, except the long bike is 15m longer and the long run too. I hope the weather is more helpful.